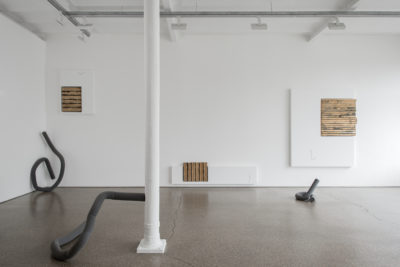 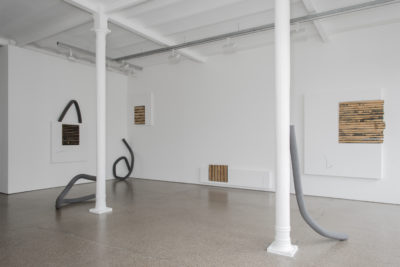 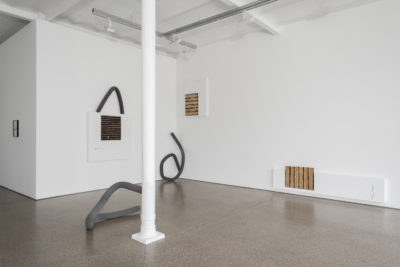 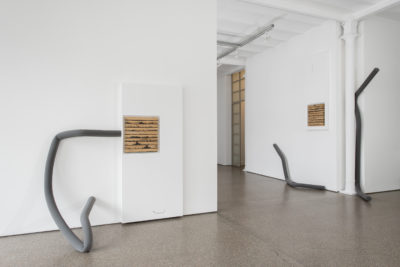 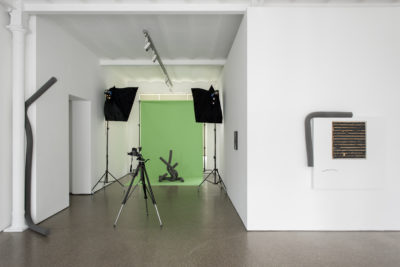 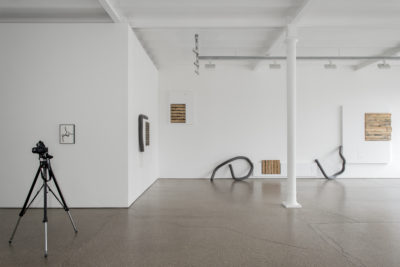 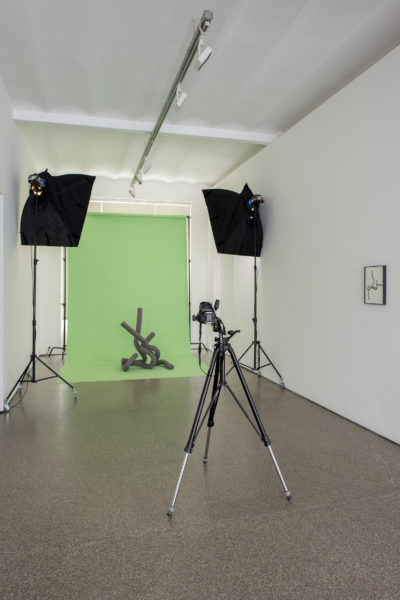 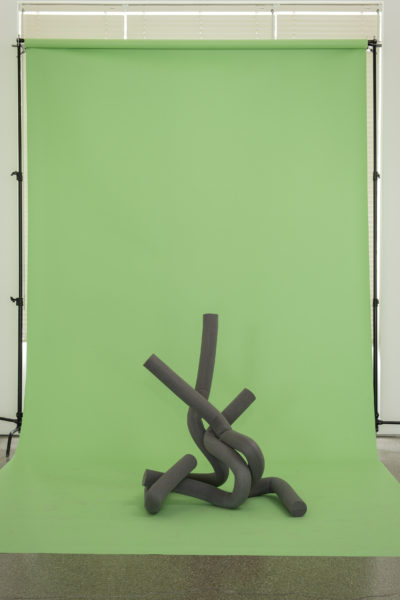 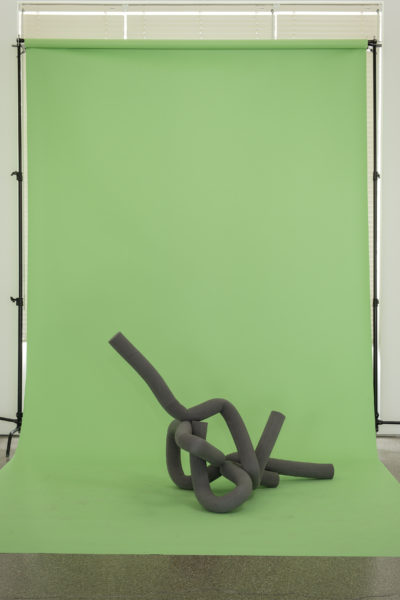 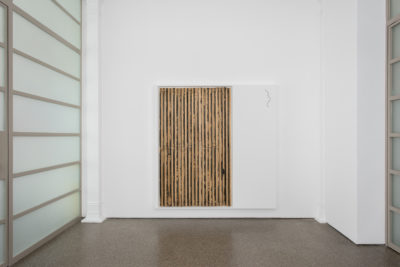 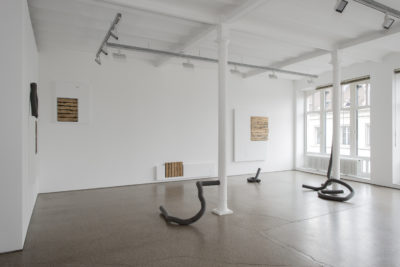 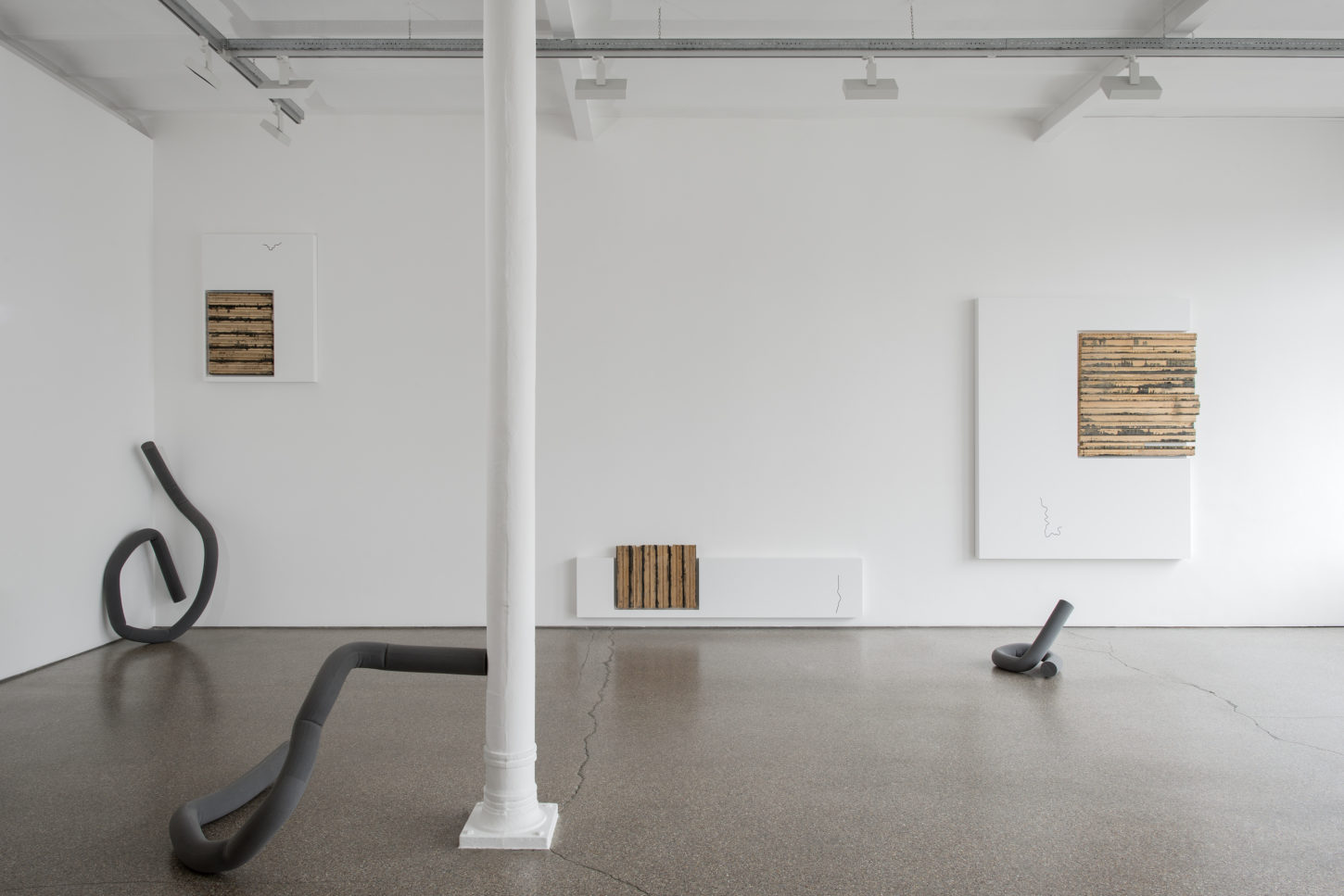 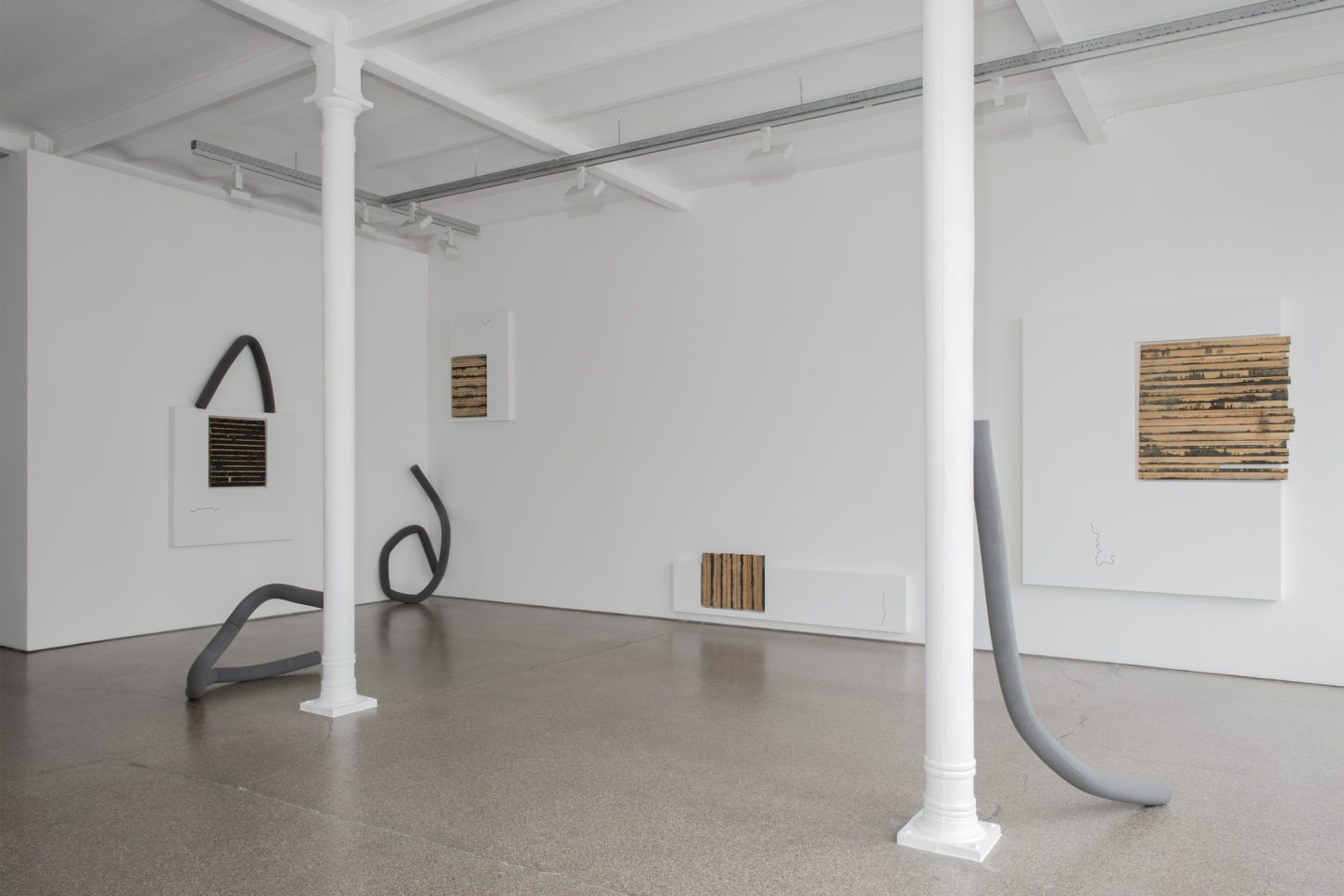 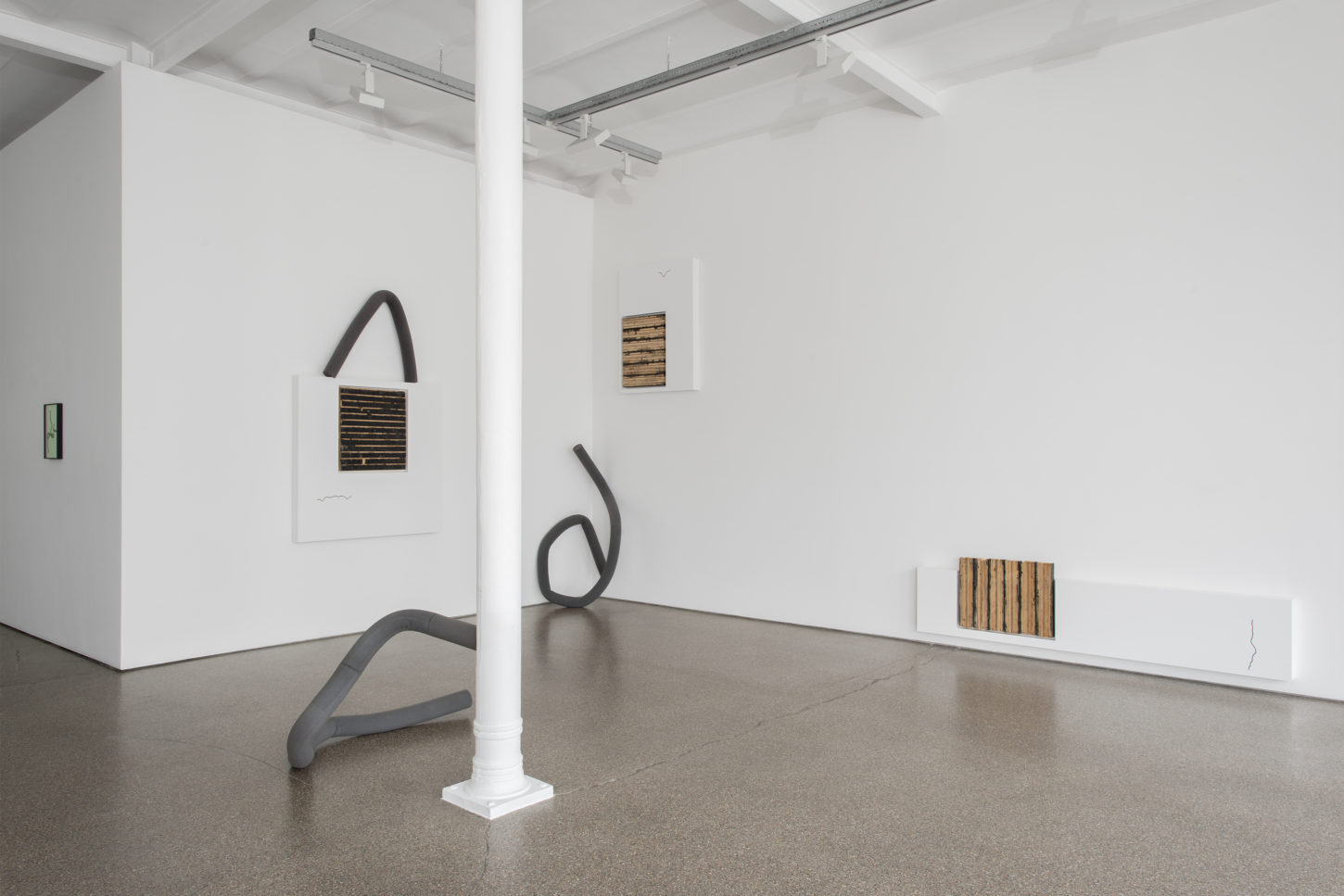 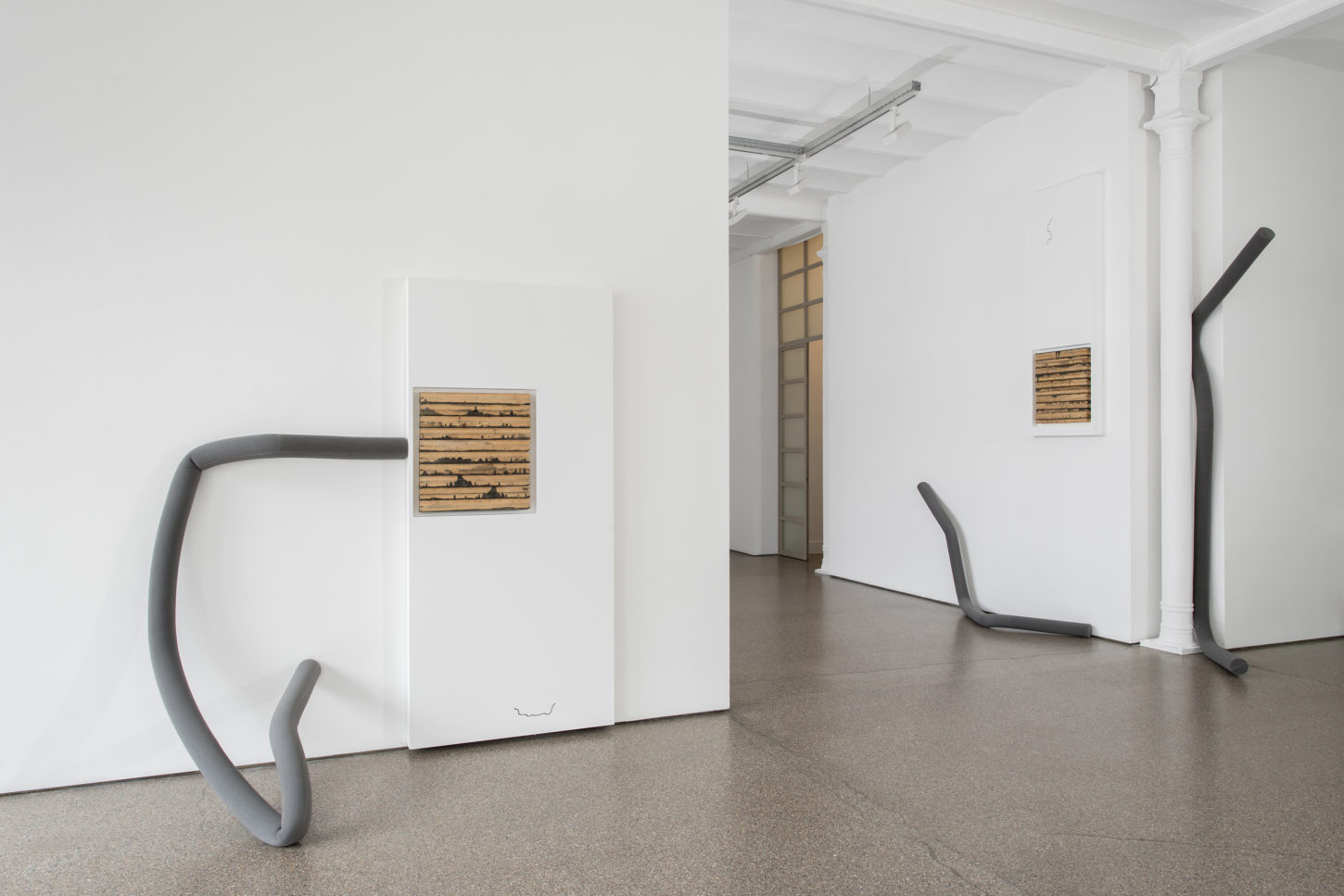 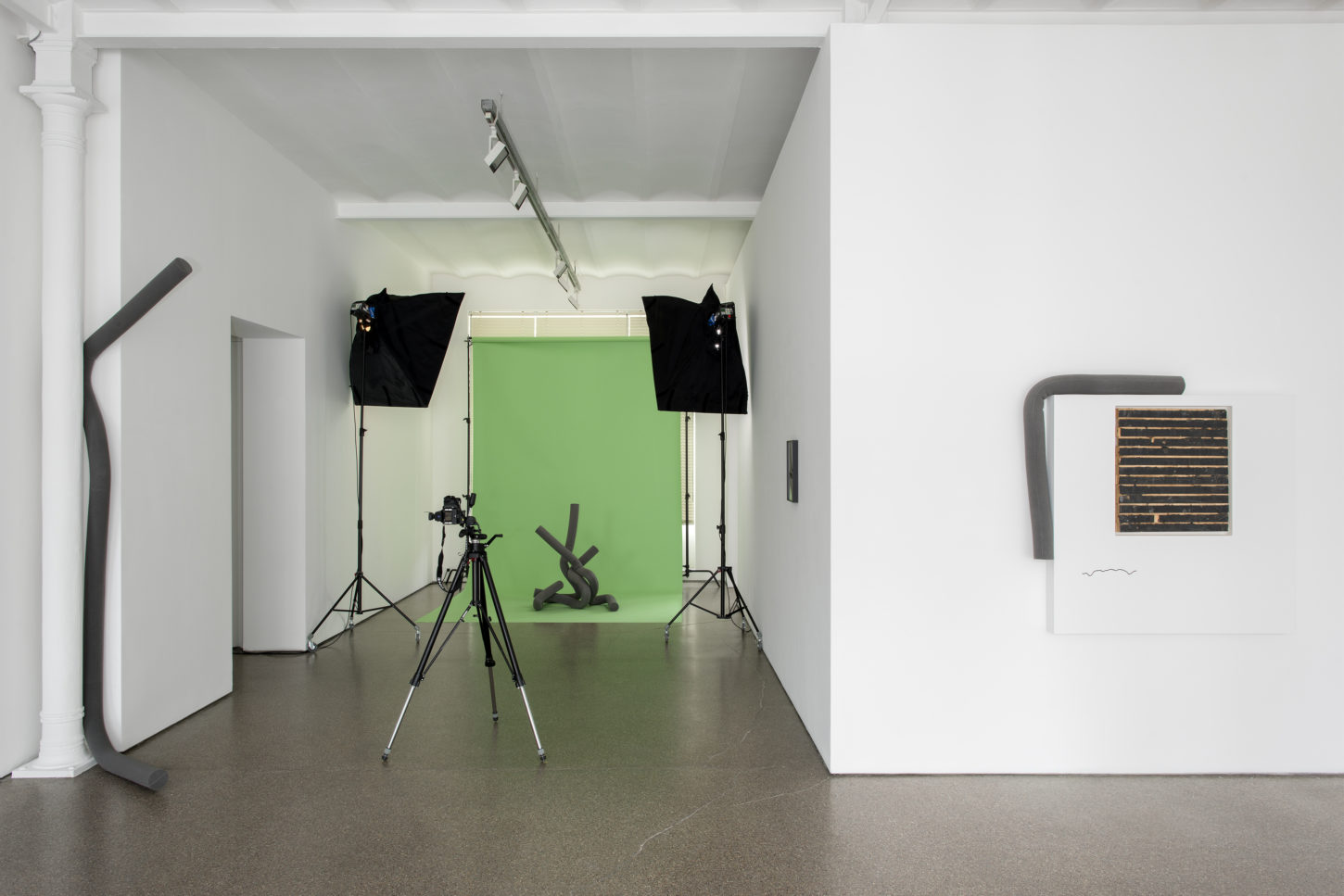 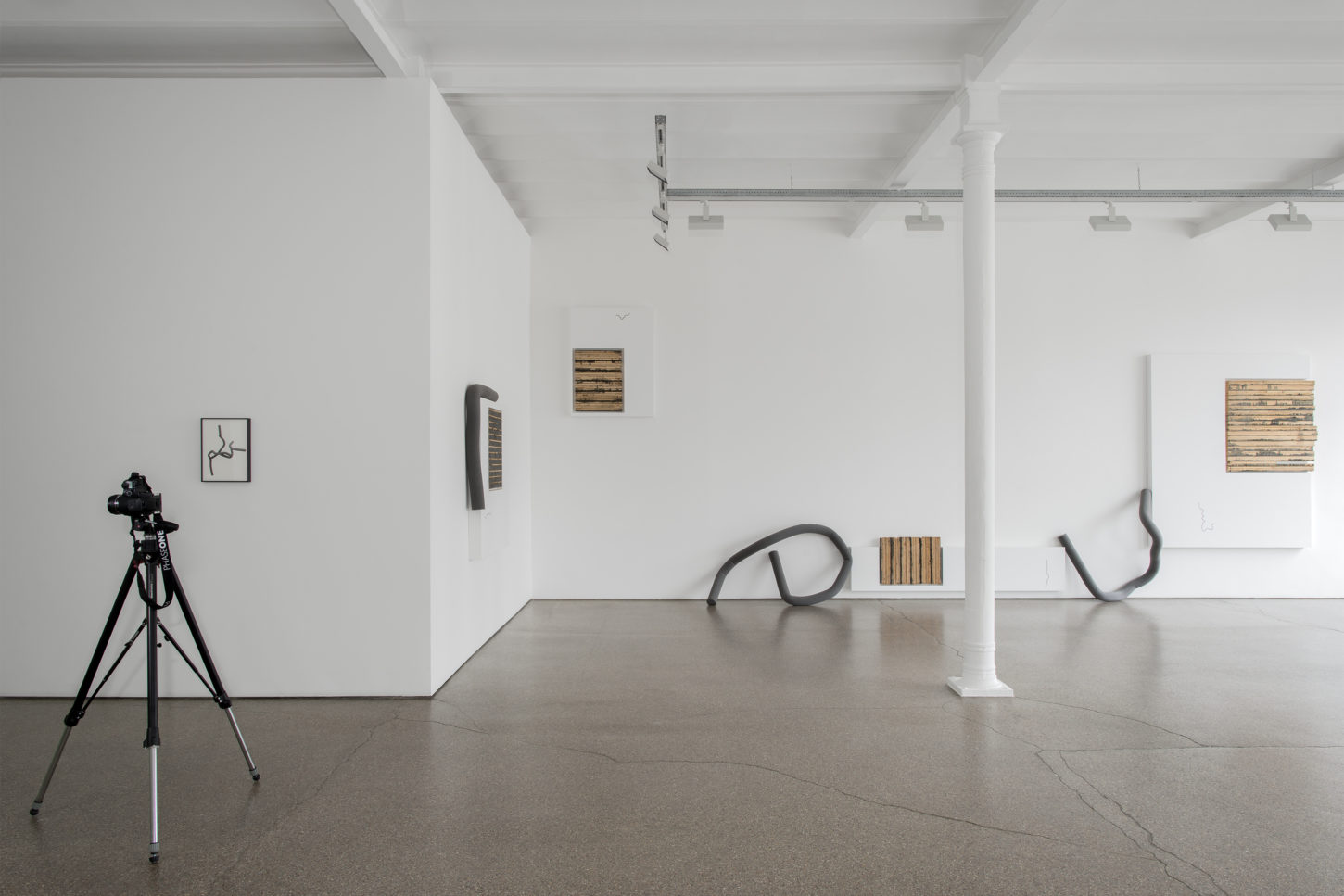 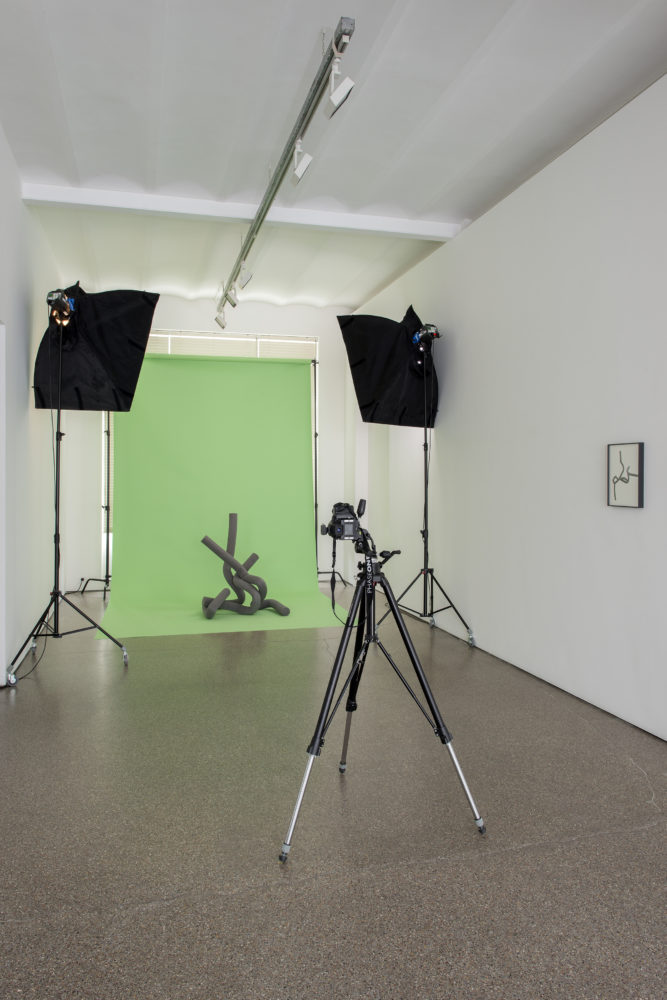 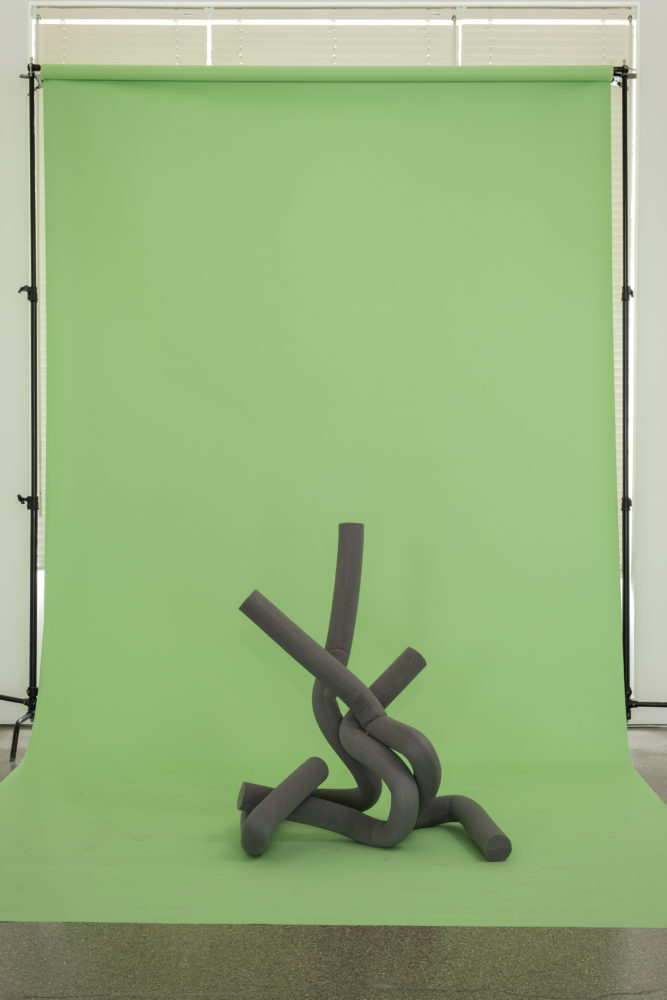 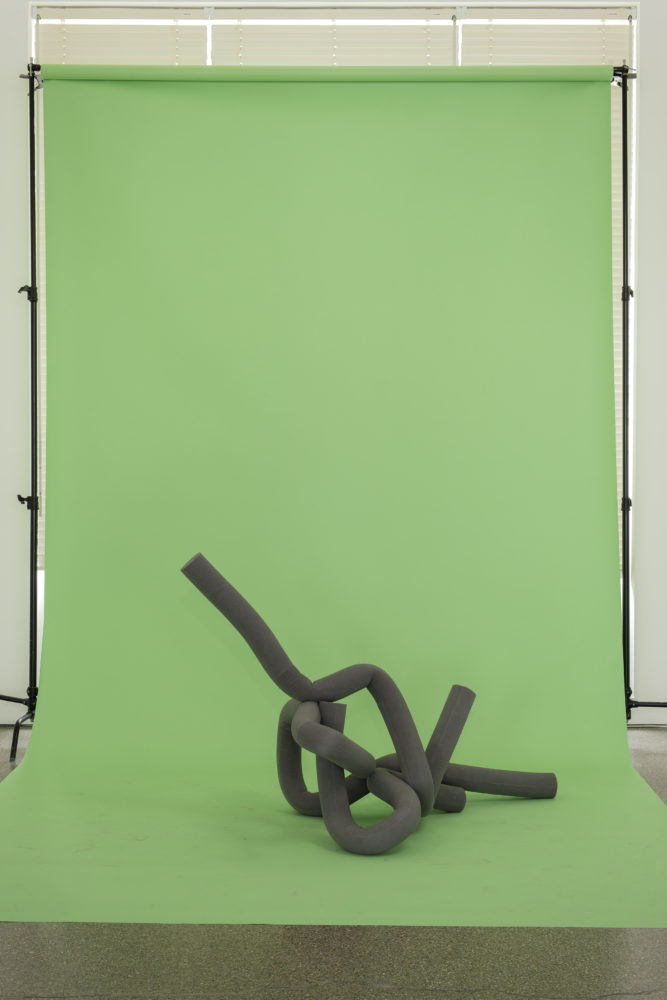 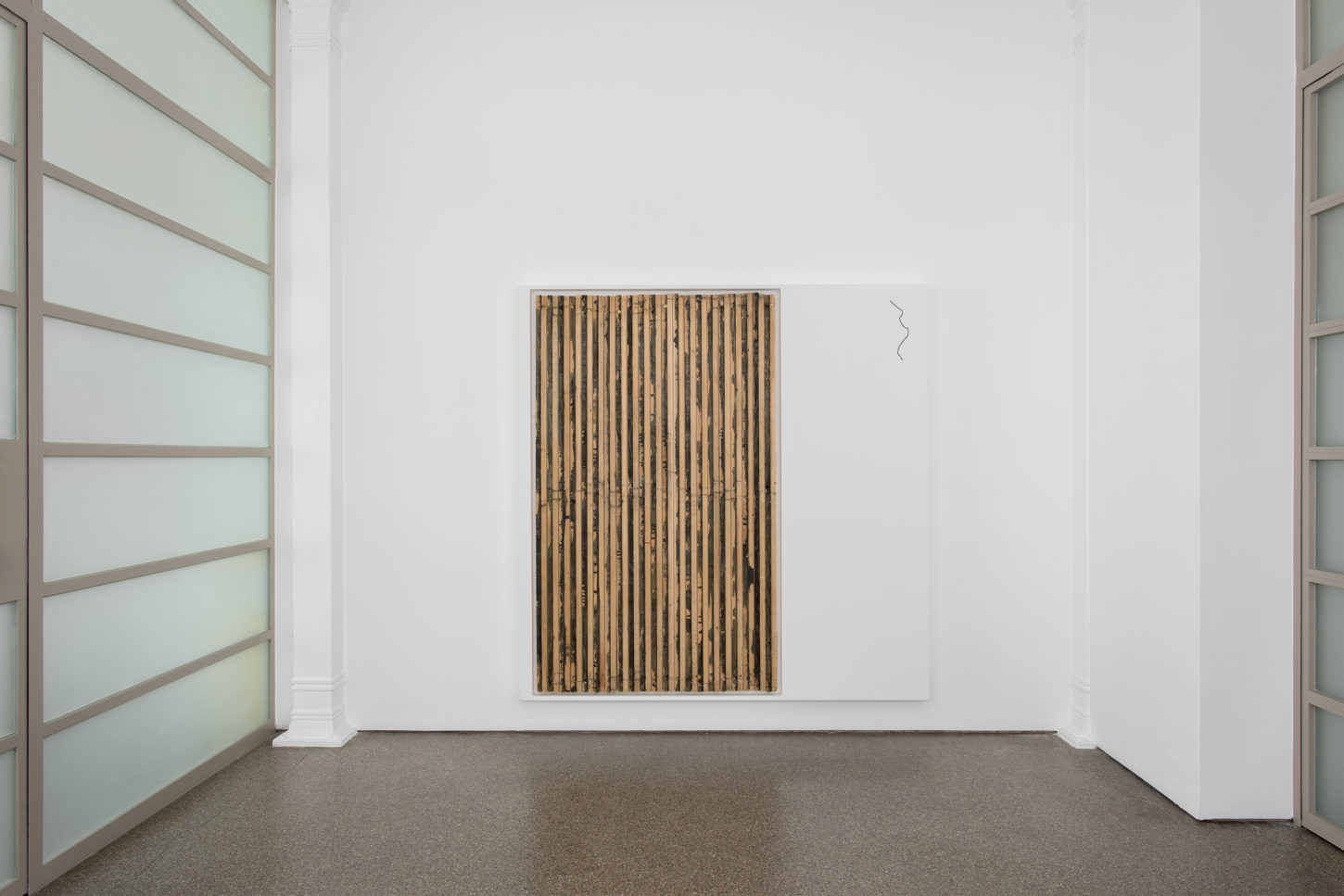 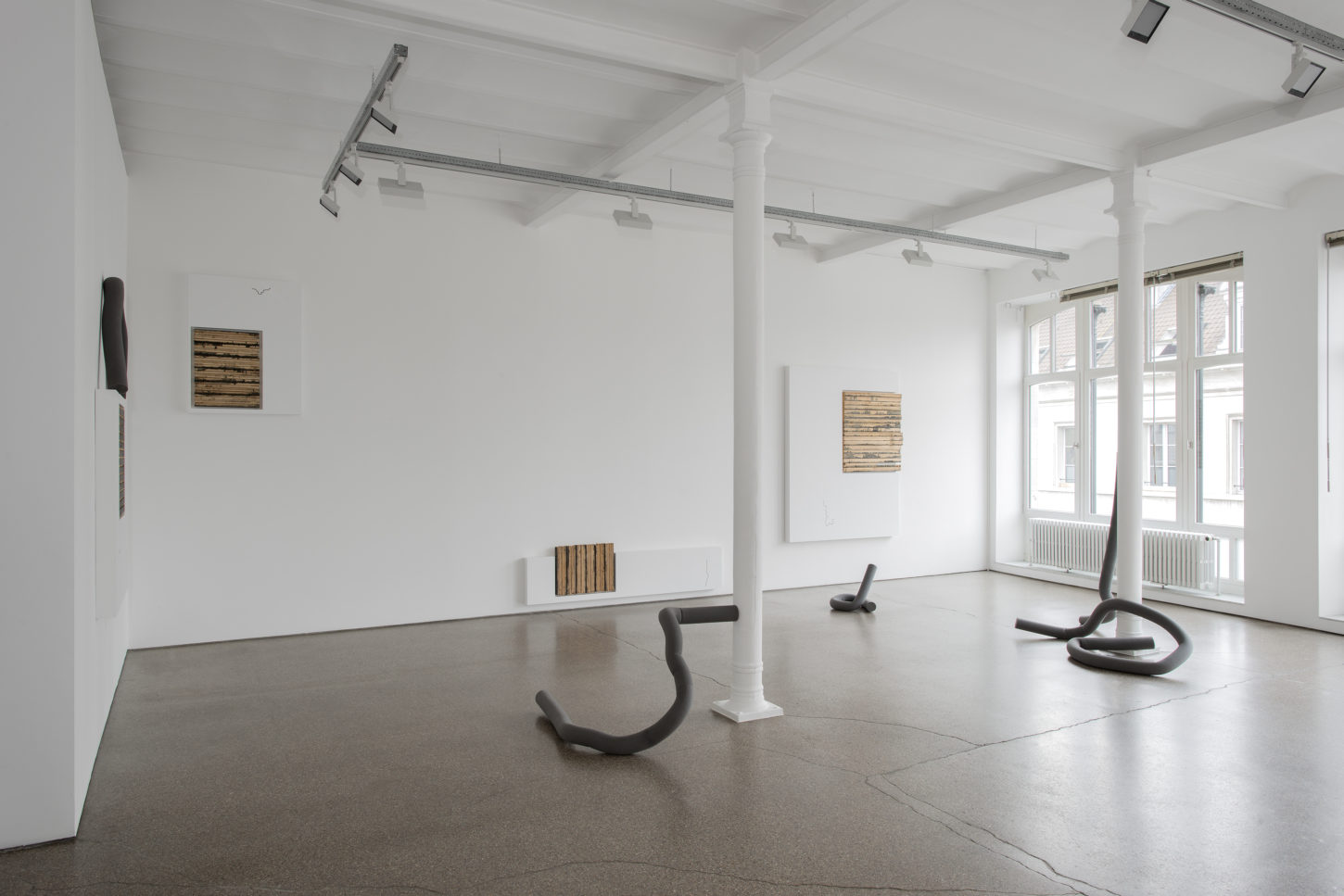 Inspired by historic practices, the exhibition addresses the problem of participatory play and interaction by observing and documenting visitors’ gestures and behavior to create an image archive, as a basis for further exploration and analysis.

On display at the gallery is a group of framed wooden panels, recycled stage boards from the largest Slovenian theater stage, Gallus Hall, built in the 1970’s and renovated in 2010. Putrih bought the old, discarded boards, trimmed the edges and used these trims to assemble wall panels. The patterns on these trims date back to the 1970’s when the stage was constructed and spills of black paint accidentally penetrated the cracks between stage boards. The assembled panels therefore symbolically represent an “invisible” part of the theater stage and will serve anew as background to the visitors’ engagement.

The participatory part of the show is based on a series of simple instructions:

– Visitors can play with the objects, long, soft poles, that correspond with wall panels, made out of foam with a bendable copper core and upholstered with fabric. Visitors can bend the objects into desirable forms.

– Groups of visitors holding the pole objects are encouraged to pose in front of a green screen, reminiscent of special effects in digital movie-making, and have their photo taken by the gallery staff.

– They are also encouraged to fill out a short multiple choice survey.

– Afterwards one copy of the image/portrait is inserted in the archive, the other copy is sent to the artist, who reconfigures the image and offers it back to the photographed visitors.

The title of the exhibition ‘Group Form’ is a reference to Fumihiko Maki’s term, coined in the 1964 essay “Investigation in Collective Form”, in which he distances himself from the Japanese Metabolism movement of his peers. According to Maki, a group form is a spontaneous and collectively built structure, adjusted to the given topography and environment and conscious of the human scale. Formally it is assembled from a series of visually repetitive elements or compositional themes. The building process is more spontaneous and minimally controlled building process compared to the Metabolist’s grand architectural master plans, which were, despite the use of modular re-configurable units, controlled from the top down.

This revolutionary idea was however faced with a lack of research and knowledge about the dynamics of cooperative building practices. In 1964 there were simply no tools to deal with such a communal engagement. The same year Maki published his essay, the architects Alison and Peter Smithson, formulated the problem this way: “Building towards the community structure as the natural way of building, is a new and very demanding ideal. We have to learn to see the town as the sum of individual acts, develop disciplines so these primarily self-serving acts can serve also collective needs.”

Putrih’s exhibition is based on the belief that the disciplines and scientific tools that were missing in 1964 probably exist today. By almost humorous gesture – applying the problem concerning urban development to the context of participatory art, Putrih asks a question – what is the point of visitors’ interaction with art objects? Is it pure therapy of play and interaction? Or is it to observe and to understand dynamics of such collective engagement? Is it too naive to expect from contemporary art to propose platforms for playful, unpredictable but empirically grounded research?