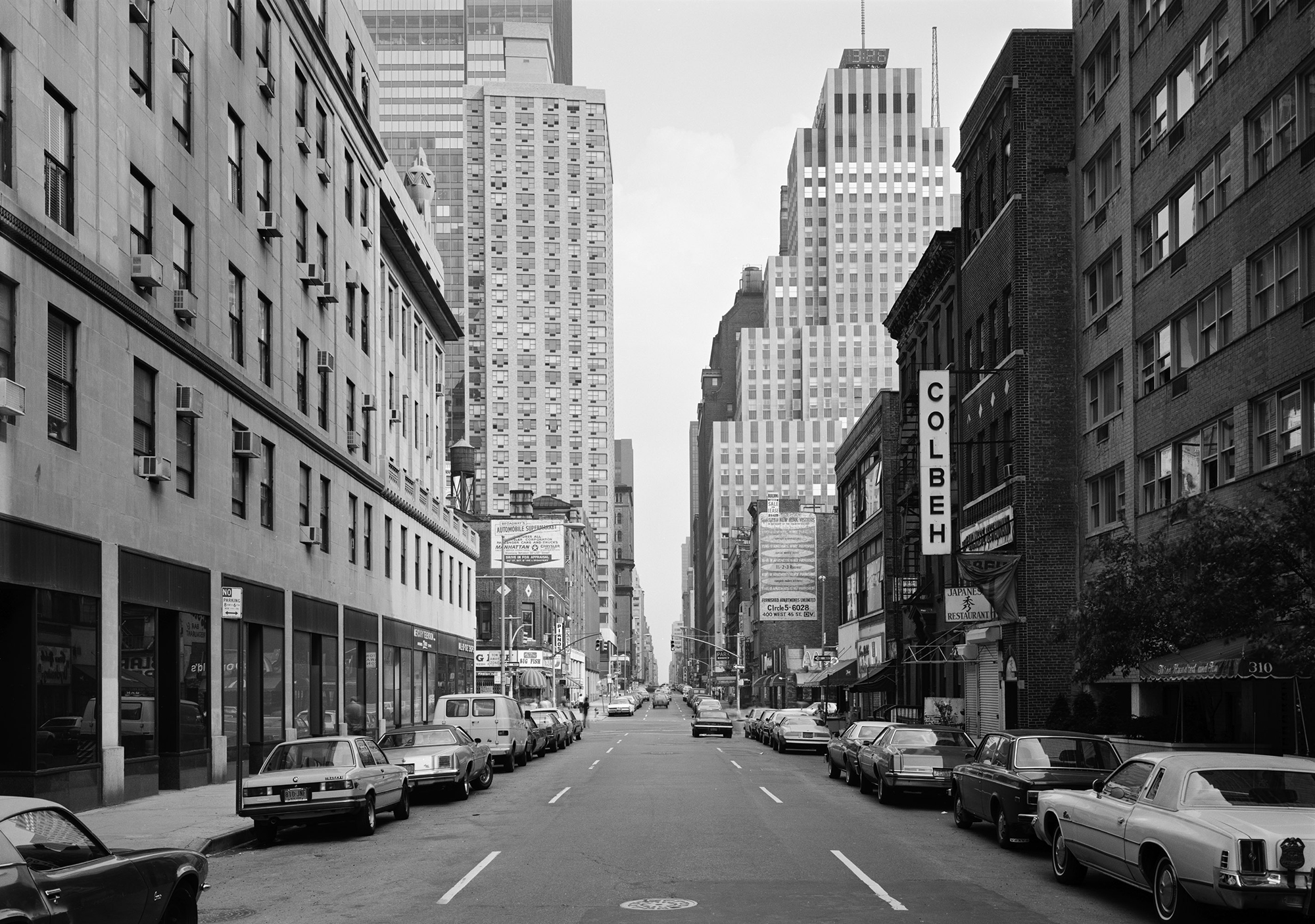 Thomas Struth, West 56th Street at 8th Avenue, New York 1978, silver gelatin print
Thomas Struth
Thomas Struth (b. 1954, Geldern, Germany) first gained recognition with his black-and-white photographs of streets and urban environments. The deadpan yet refined central perspective in these photographs of Paris, Rome, Tokyo, New York, Chicago, or the cities of the Ruhr valley, allows for a quasi-scientific analysis of our built environment. Expanding on the topological method of his teachers Bernd and Hilla Becher, Struth went on to apply his intensely focused photographic approach to a wide range of subjects. From Family Portraits to Flowers, Places of Worship or Museums and their audiences, and more recently, sites of technology, he explores themes that pertain to central societal and philosophical questions of our time. 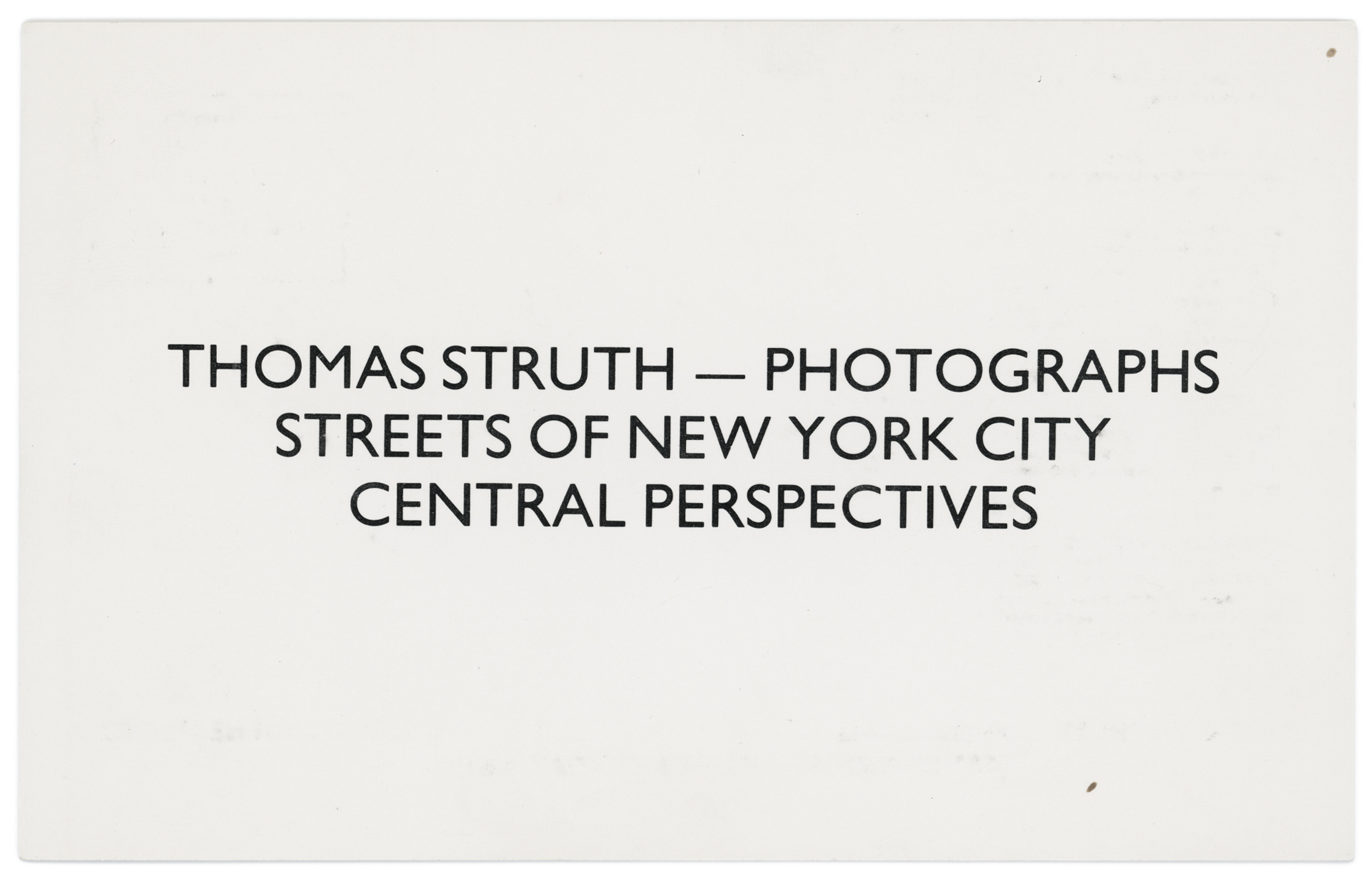 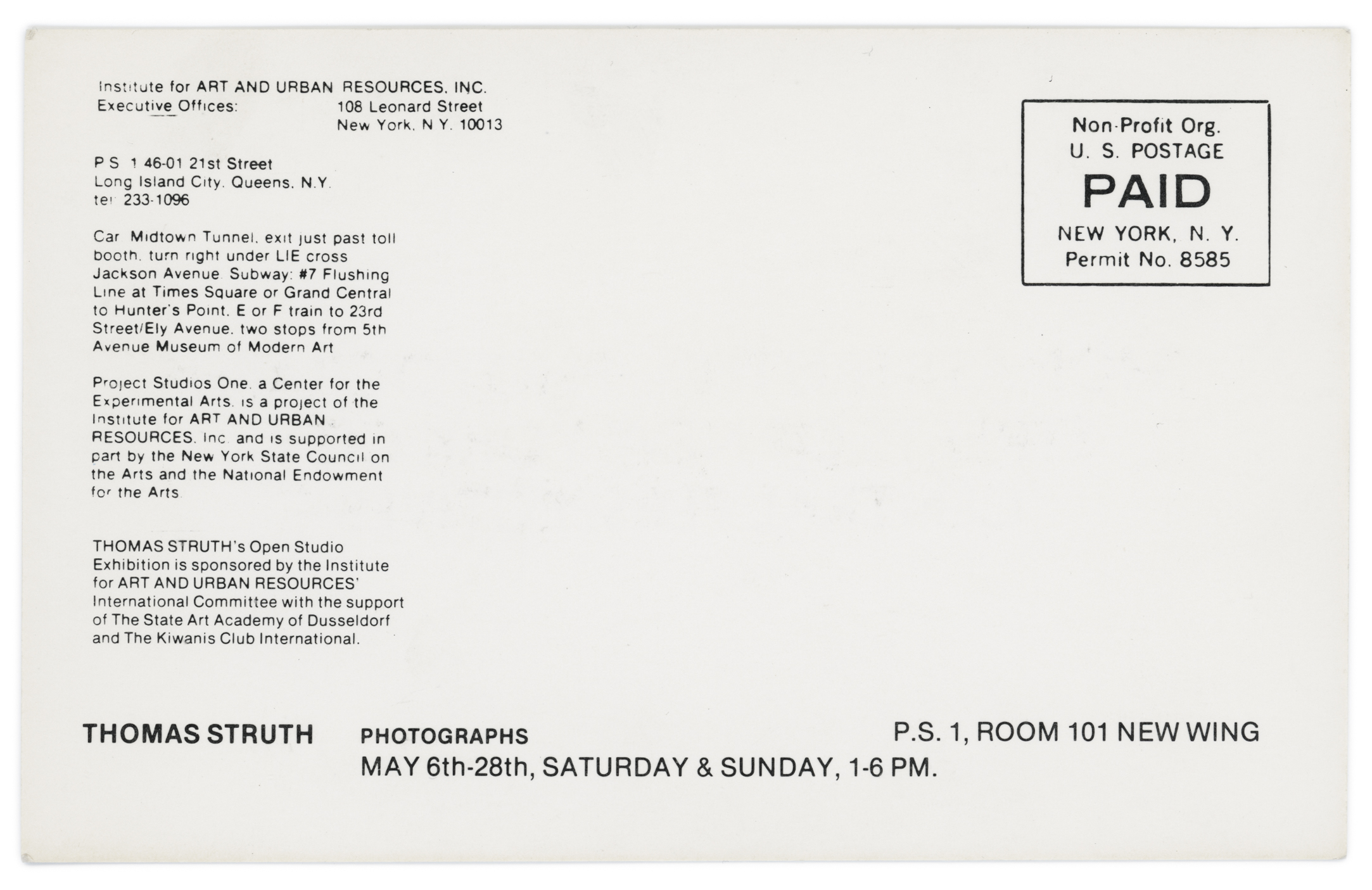 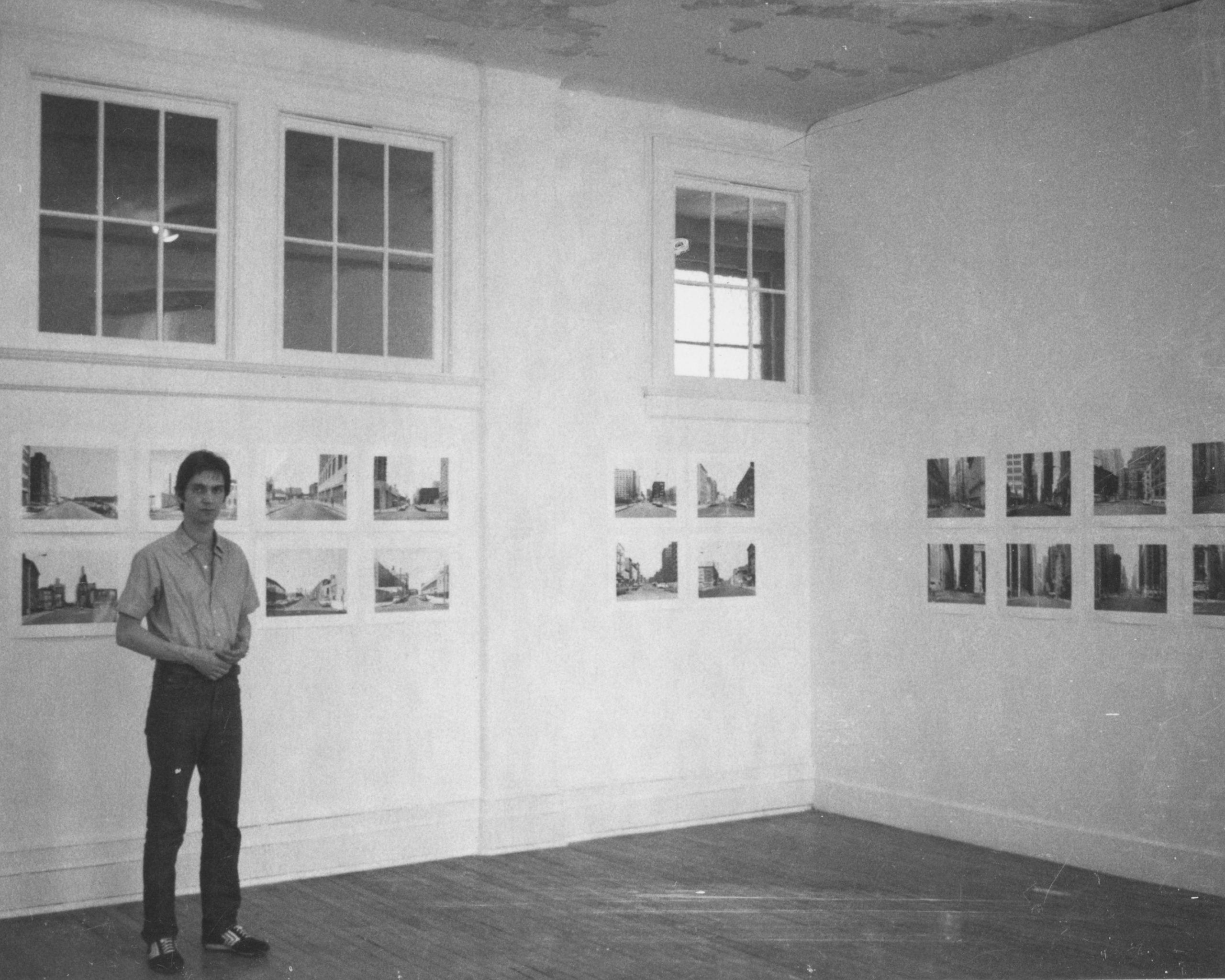 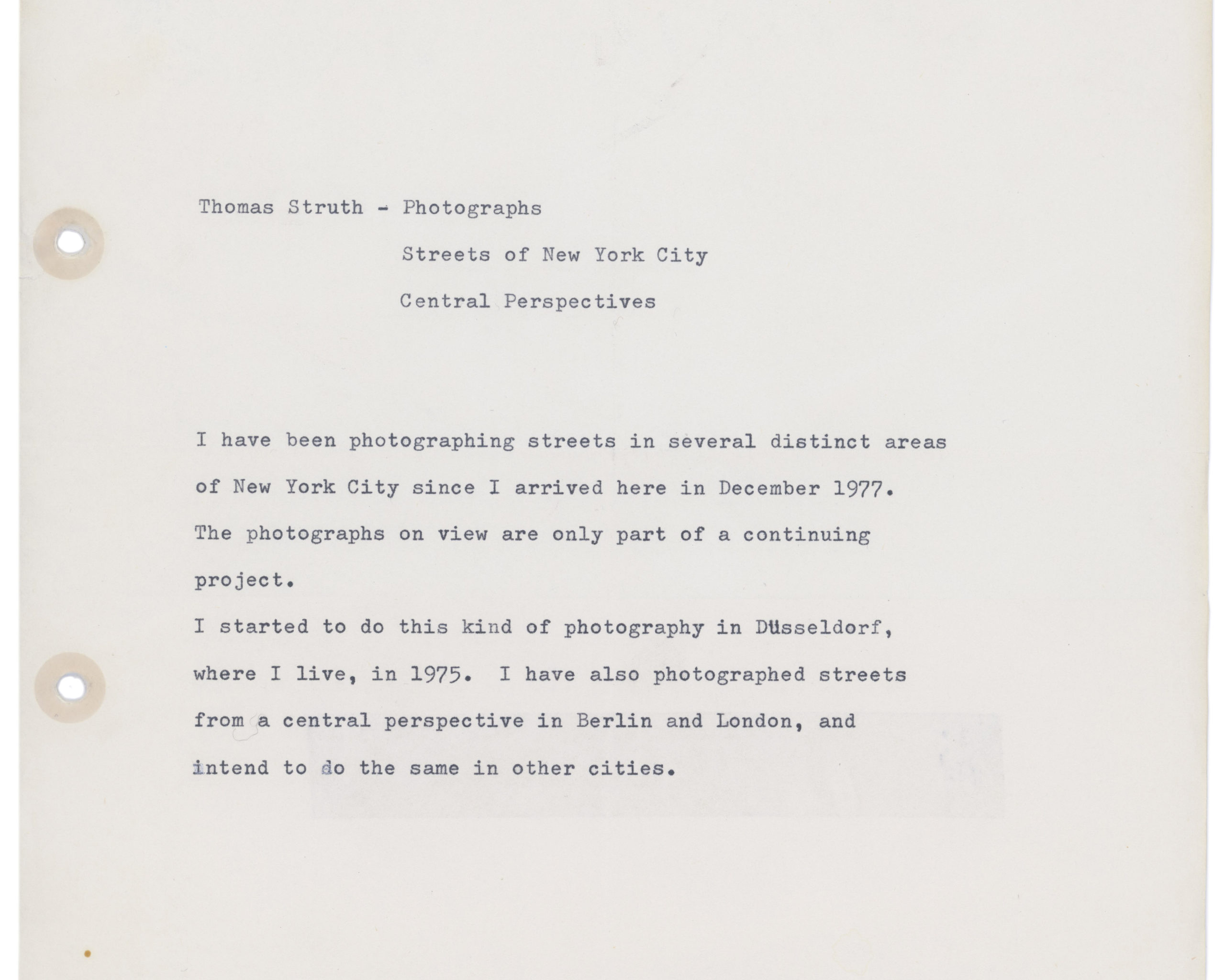 Thomas Struth ⎼ Photographs, Streets of New York City, Central Perspectives, Introductory text, PS1, New York, 1977
In 1977, Thomas Struth was awarded a scholarship from the Kunstakademie to live and work in New York for six months. Over the course of his stay, Struth photographed in various districts making two hundred black-and-white photographs of the streets of New York City. He didn’t set up his camera on the pavement, but right in the middle of the street, capturing a central perspective to which pedestrians and motorists alike are unaccustomed. 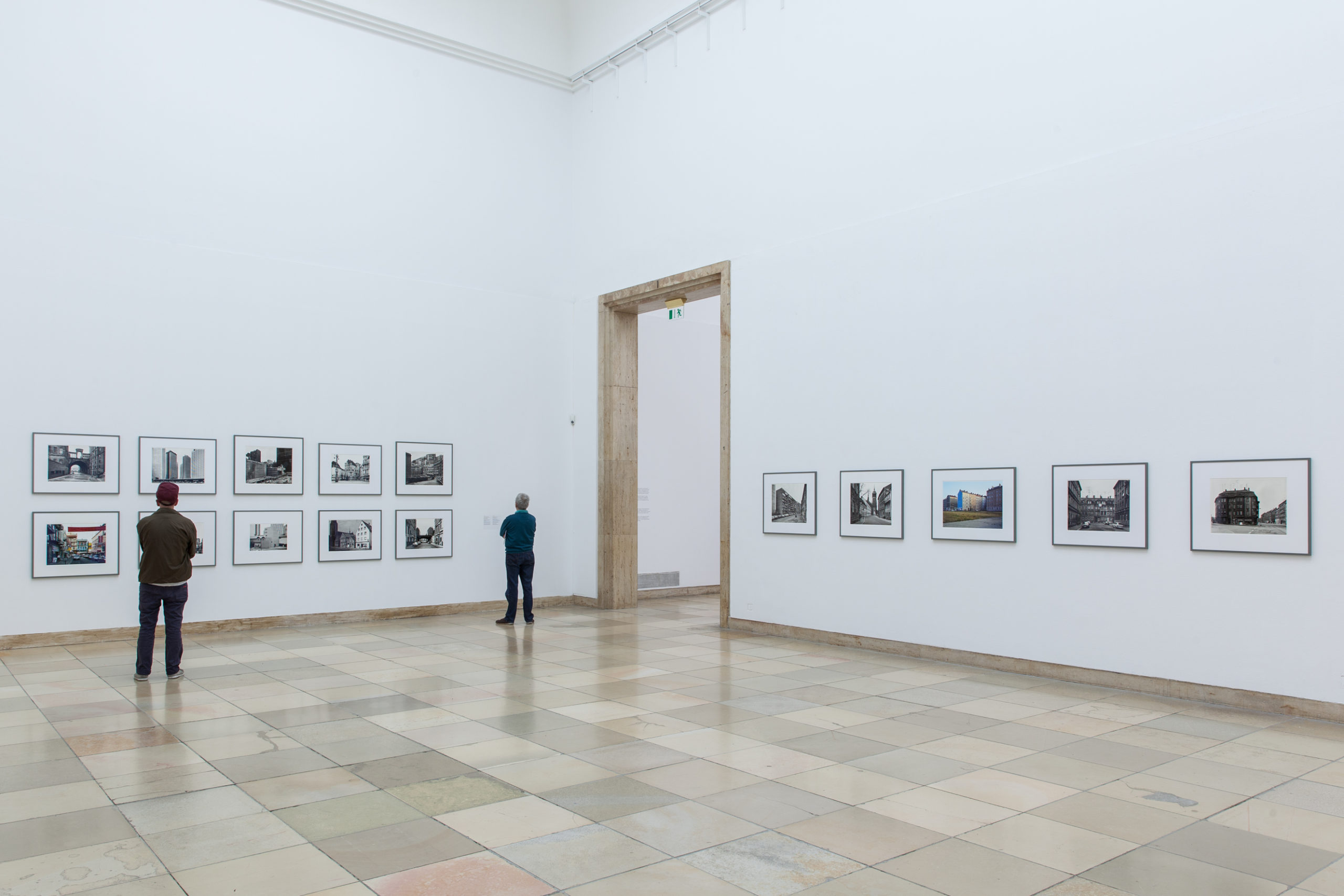 Installation view, Thomas Struth: Figure Ground, Haus der Kunst, Munich, 2017
© Maximilian Geuter
” I was interested in the possibility of the photographic image revealing the different character or the ‘sound’ of the place. I learned that certain areas of the city have an emblematic character; they express the city’s structure. How can the atmosphere of one place be so different from another, and why? This question has always been important to me. Who has the responsibility for the way a city is? The urban structure is an accretion of so many decisions.” 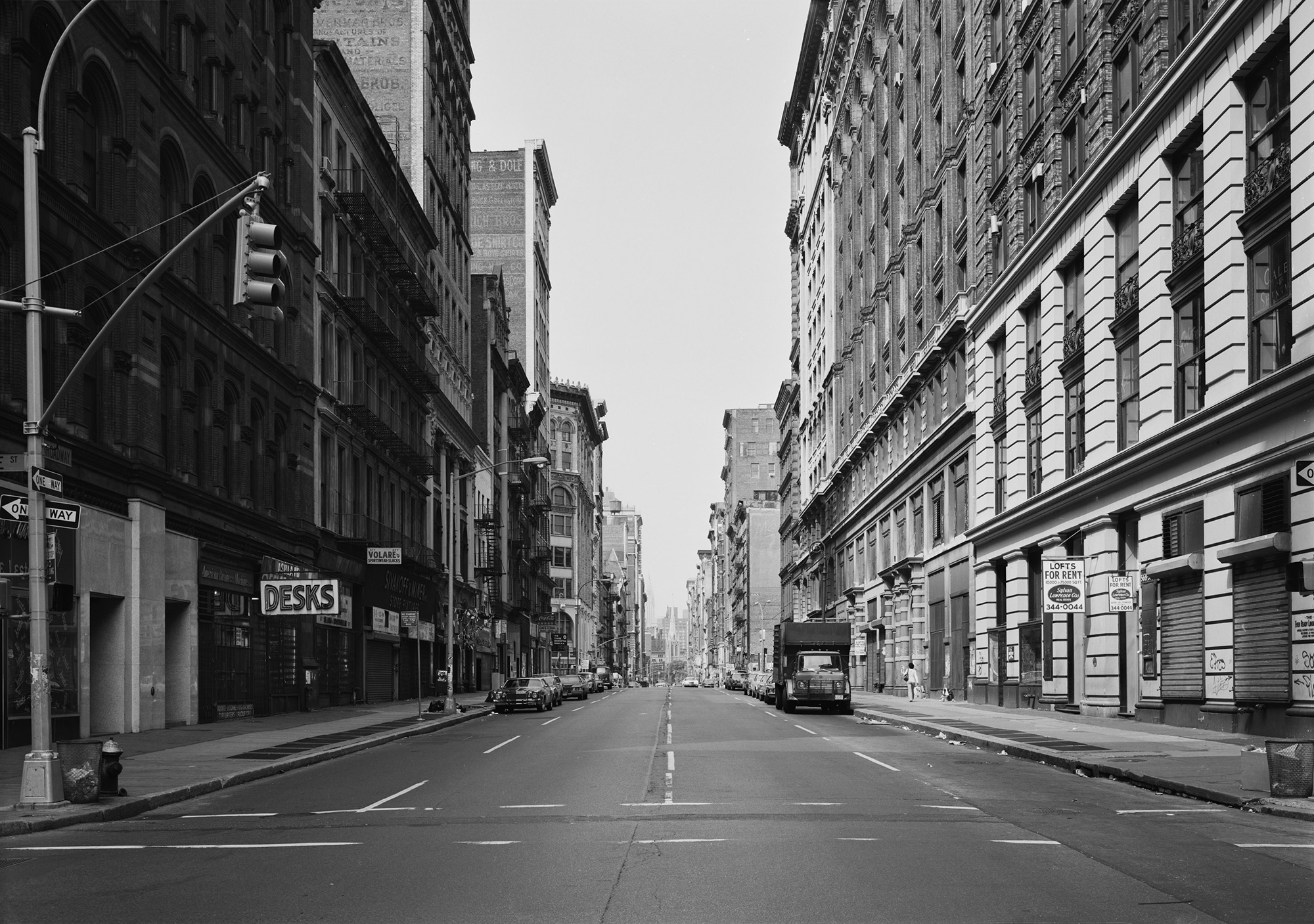 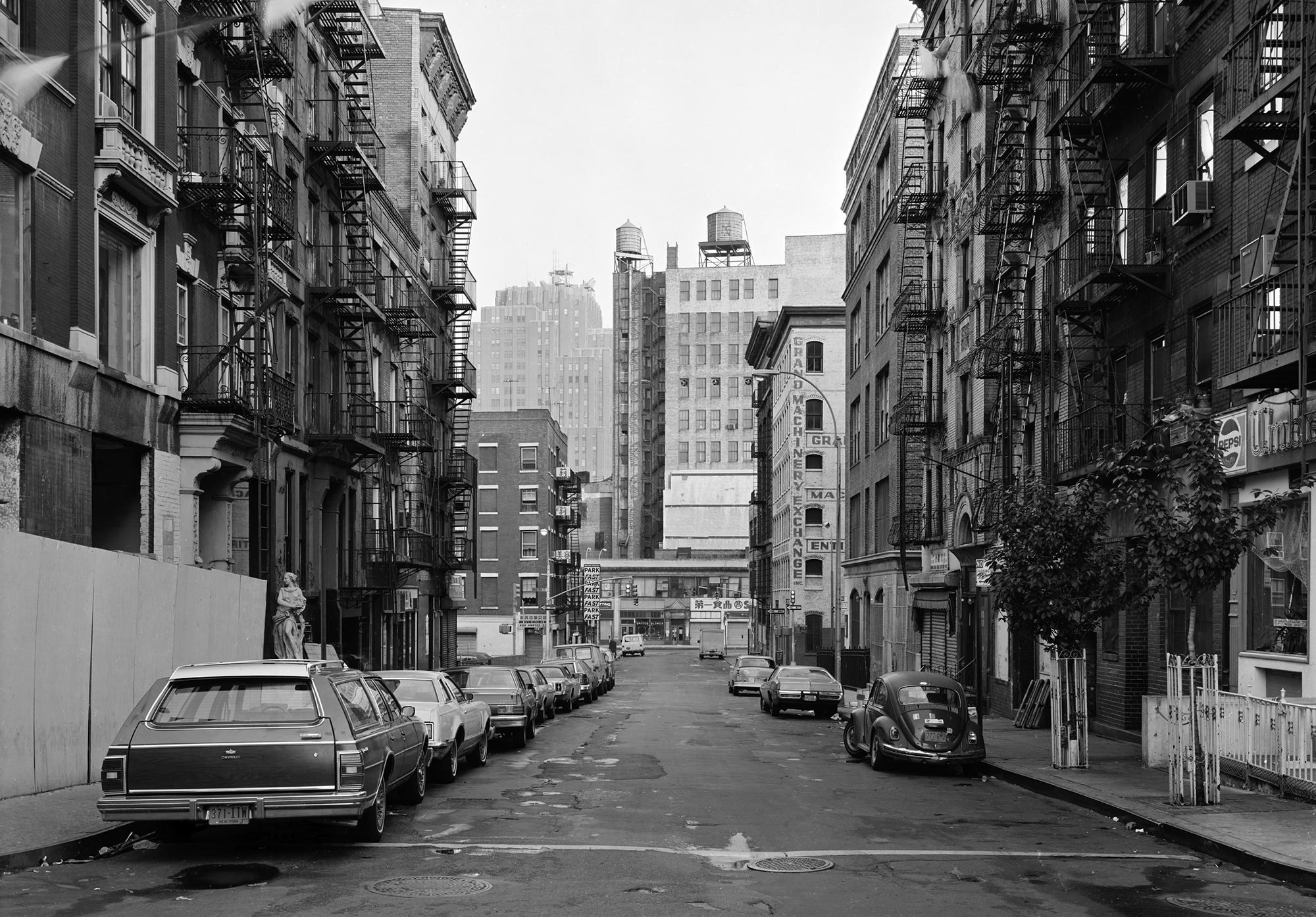 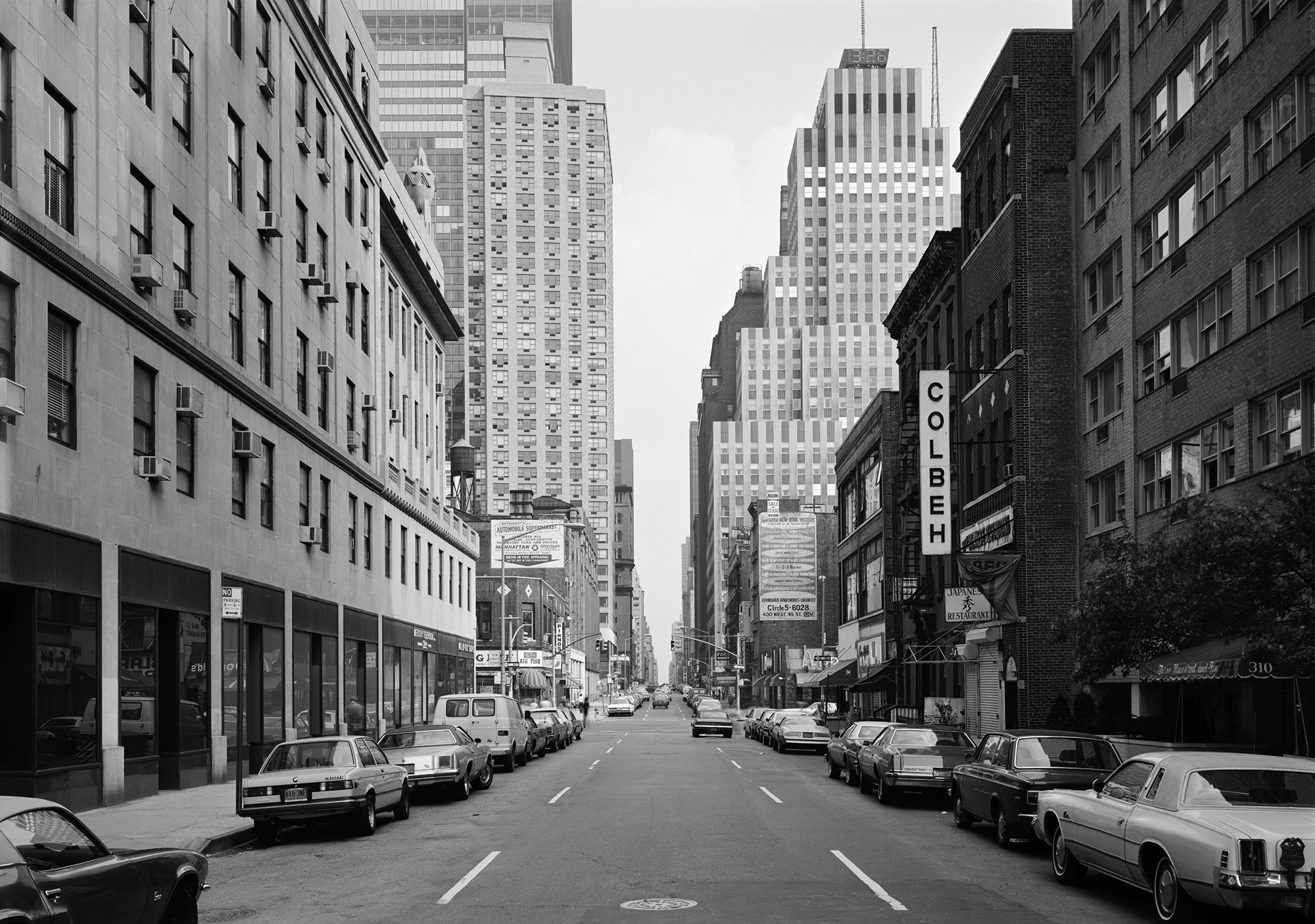 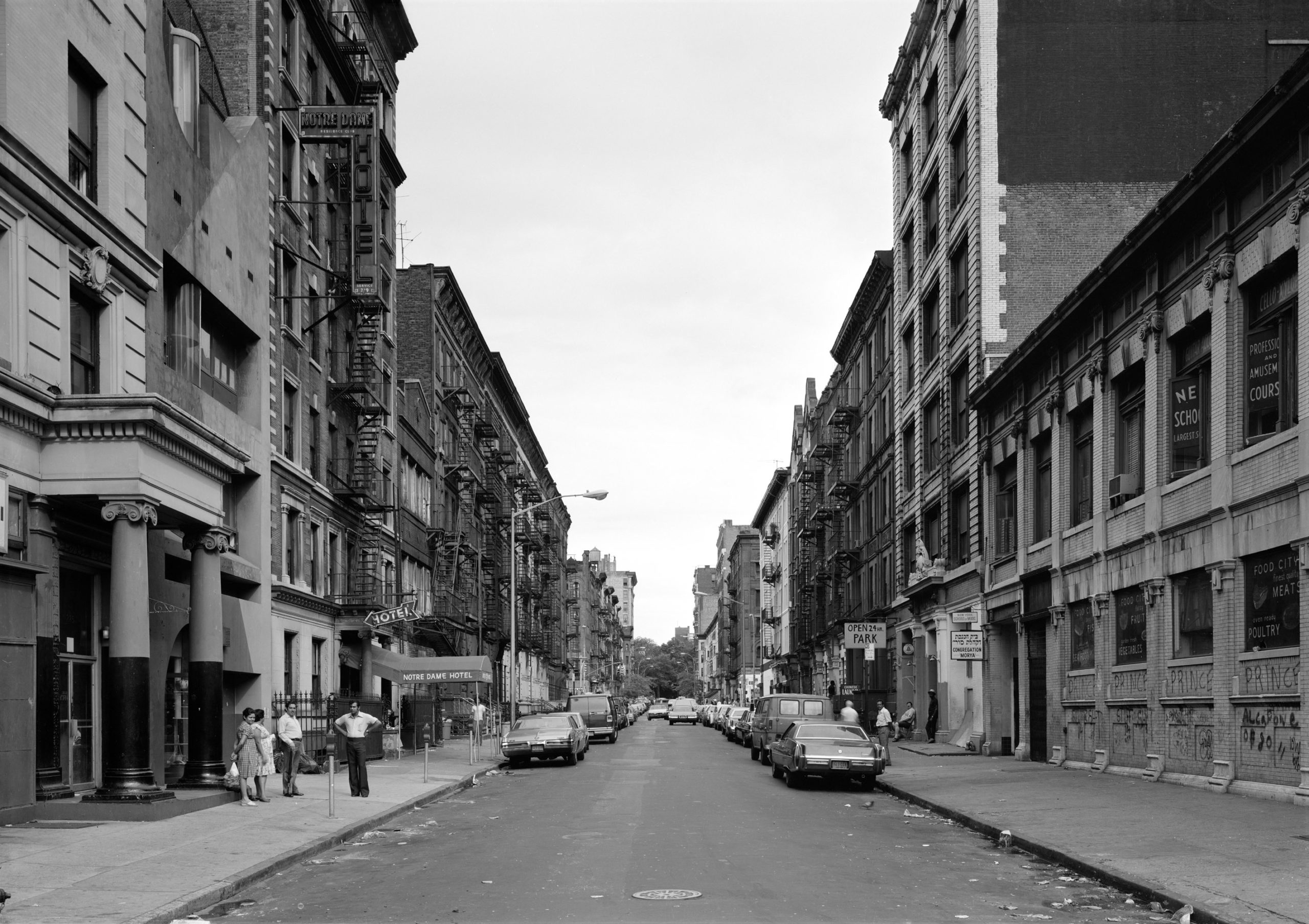 silver gelatin print 40 x 58,4 cm 66 x 84 cm ed. 5/10 Ref. 4269
“ As part of a larger system, the developments in Struth’s streetscapes do not take place in isolation. As iconic and influential as the initial streetscapes have proven to be, the architecture series advances by looking beyond its categorical borders, not by continually replicating its foundational parameters of image construction. Contributions from two other series propel the later streetscapes: introduction of the populace by the portrait photographs and genesis of overt visuality introduced later on in the museum series. Through interchanges with these other series, the streetscapes do more than incorporate new elements—they systematically recast them, altering the archive in the process.” 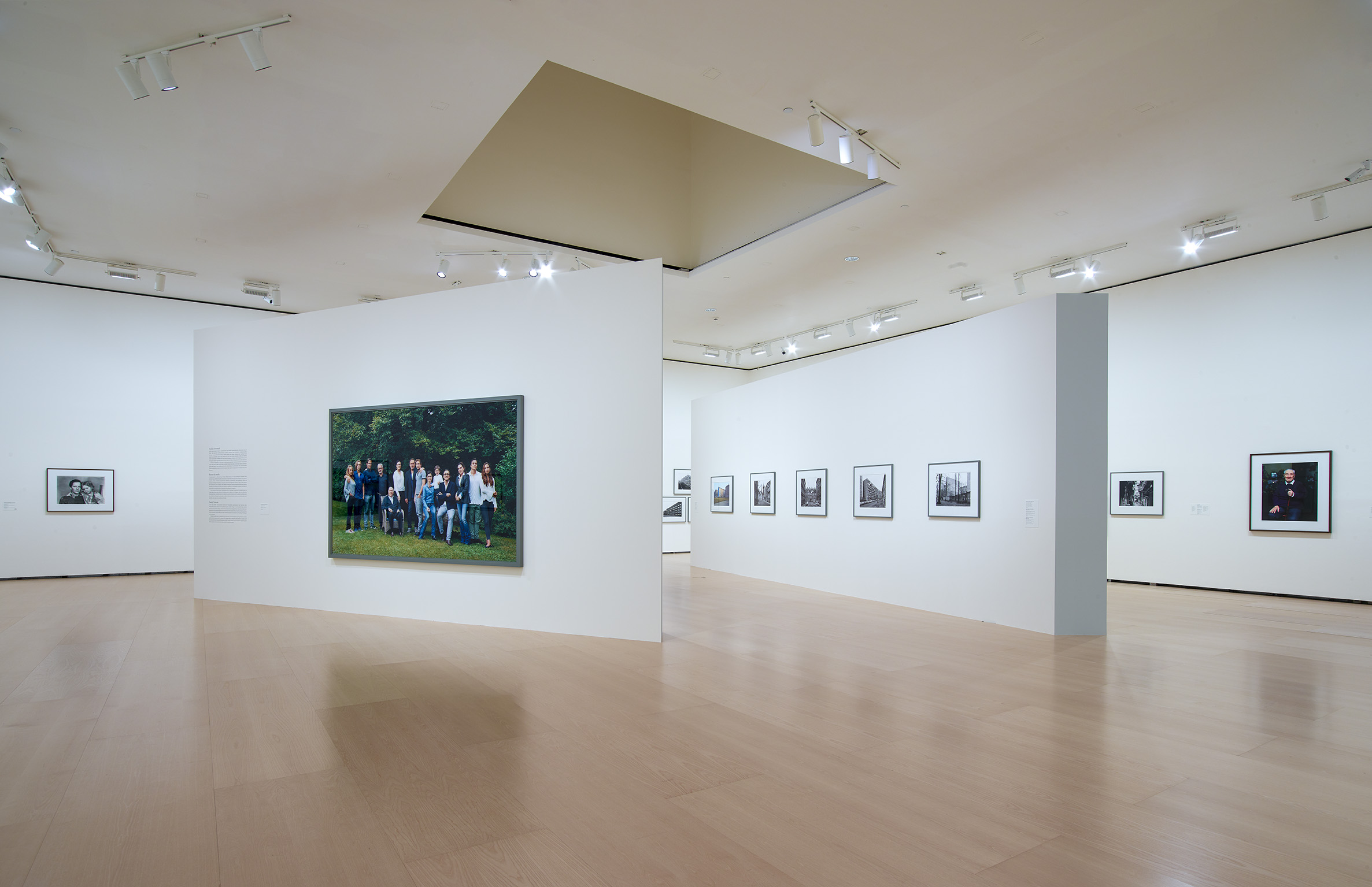 Installation view, Guggenheim Bilbao, 2019
© FMGB Guggenheim Bilbao Museo, photo by Erika Barahona Ede
“ The street is a universal topic to which anyone can relate, it’s less specific than water towers or gas tanks. When I made these pictures, I was also concerned with questions of comparability and analysis, so I decided to take photographs of streets composed with a central perspective. The primary focus was to create a juxtaposition of two rows of buildings so that it would look as though the street had been opened up. Thus both rows would be made comparable, avoiding any conventional cliché. It’s not so much about the street as an object, because streets are not objects, they are complexes that have evolved over time and are continually subjected to a wide range of conditions. With this in mind, I have always wanted to explore our common responsibility for what these conditions are and what they might be.”
⎼ Thomas Struth 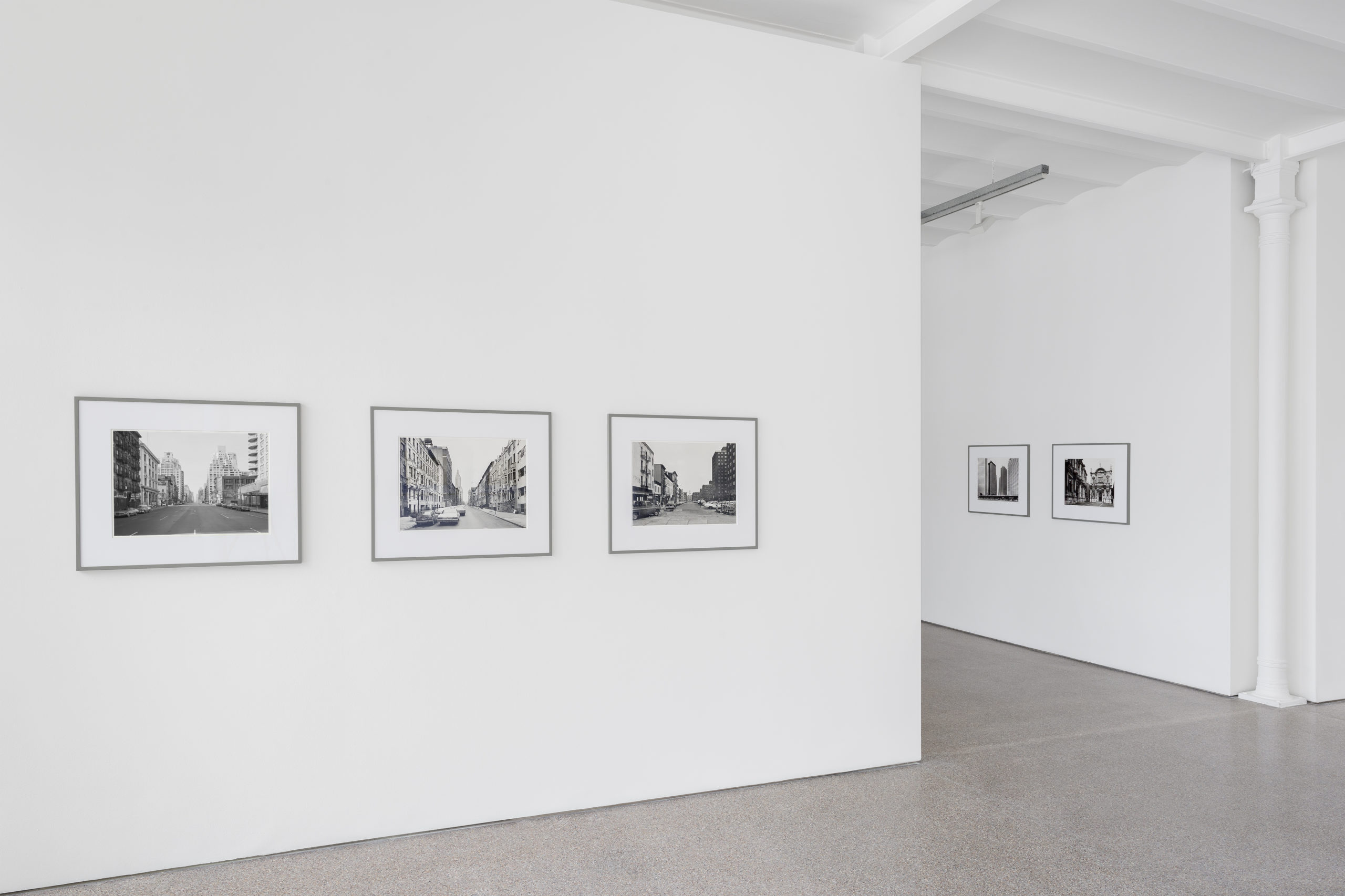 Installation view, Thomas Struth, Galerie Greta Meert, Brussels, 2018
“ The places in Struth’s [city] photographs typically represent the collaging together of traces of multiple intentions, traces laid down at different, even widely disparate moments, thereby modifying, covering, or effacing the traces of previous intentions, so that the scene as a whole presents itself as everywhere stamped by intention albeit…not by a single or a collective intention to produce the scene, the place, the milieu as it appears to the viewer.”

⎼ Michael Fried, Why photography matters as art as never before, 2008. 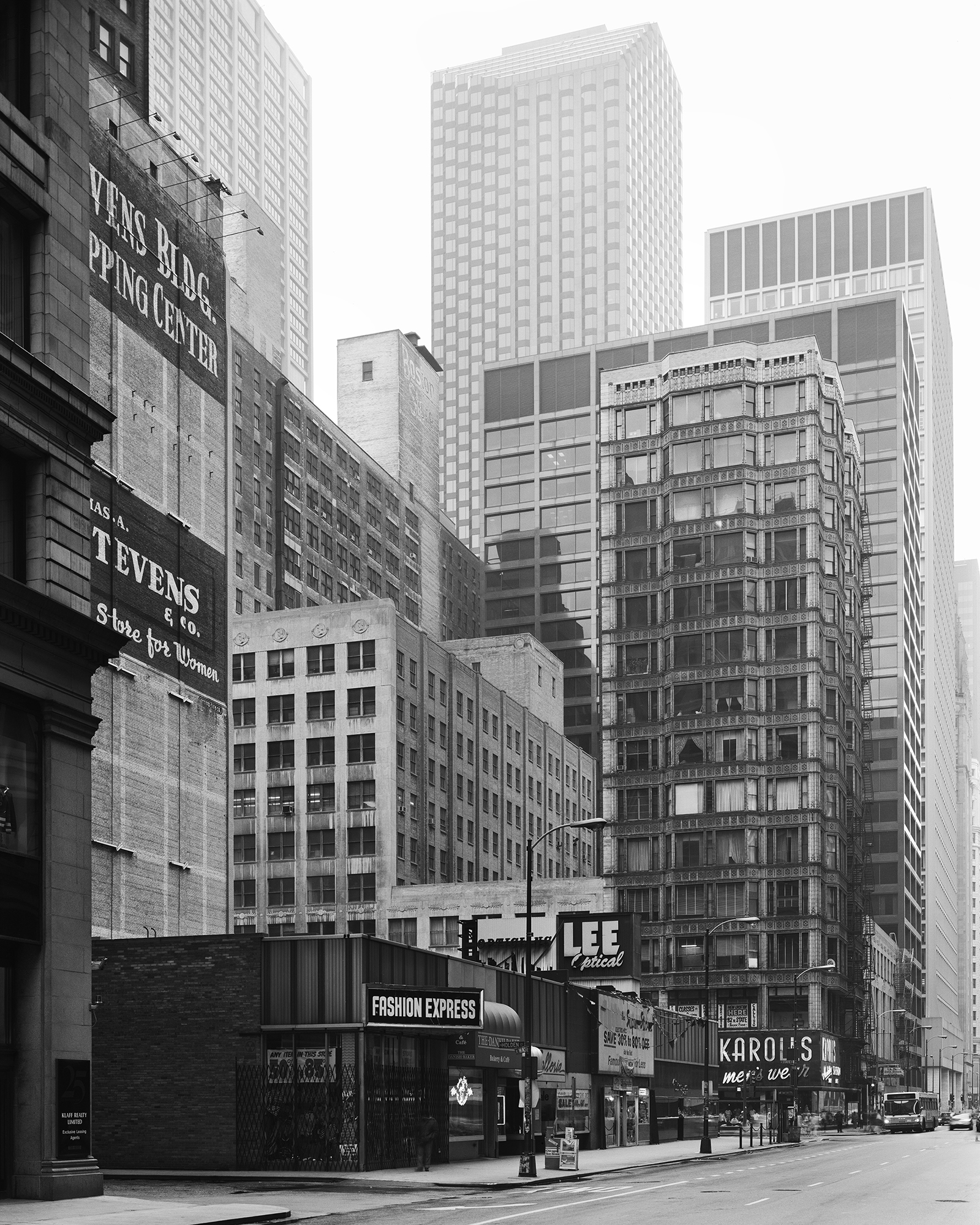 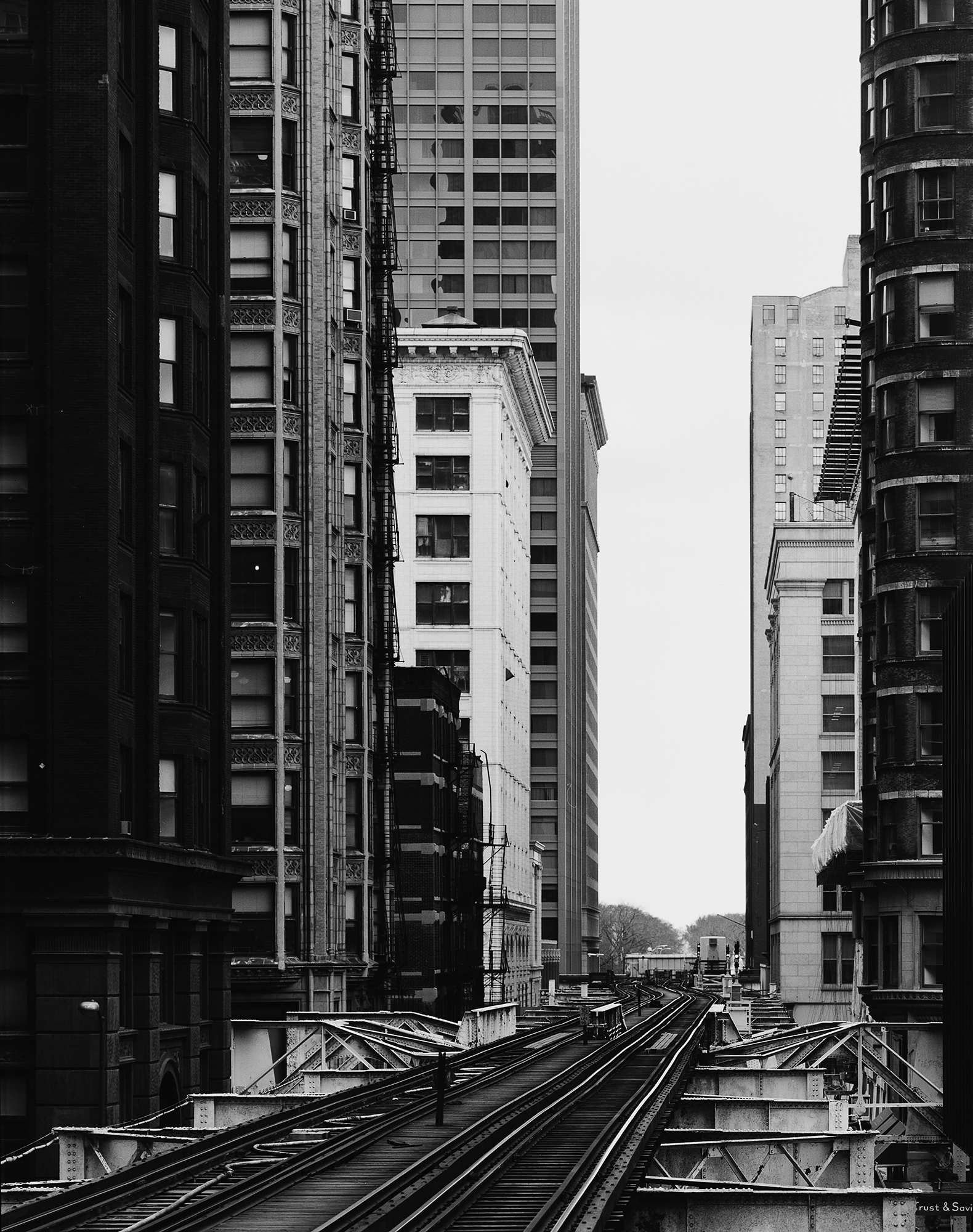 After the series of works made at the Museo del Prado in 2005, Struth began to consider the possibilities for a new body of work which could combine his fascination with complex visual structures with his ongoing interest in the structures and technologies humankind is able to imagine and build.
Intrigued by the technological prominence of NASA, Struth visited twice the Kennedy Space Center at Cape Canaveral in Florida. On his first visit in 2007, he toured the NASA Space Museum and was struck by the immensity of the programme over the past fifty years and the collusion of science, politics and power in the American space project. On a subsequent visit he gained acces to working areas of the NASA complex, for example the workshops where the space shuttles are repaired between missions.

Struth’s visit to NASA and to several sites in Korea (DSME shipyard, a.o.) threw into sharper focus his interest in photographing places which are at the crossroads of technology and ambition, where the limits of what is possible are continually being tested. 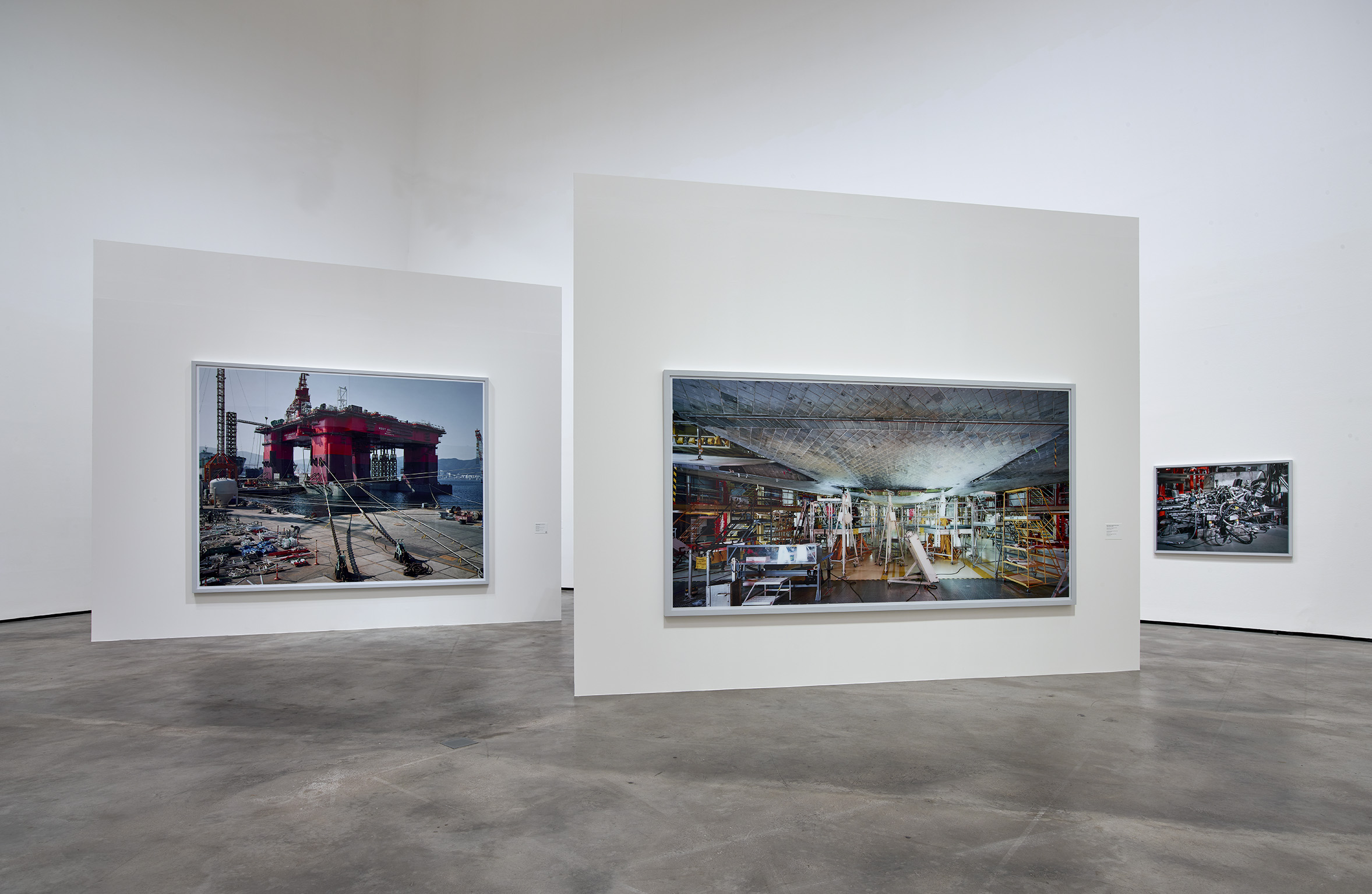 Installation view, Thomas Struth, Guggenheim Bilbao, 2019
© FMGB Guggenheim Bilbao Museo, photo by Erika Barahona Ede
” A scale of human endeavour, belief, organisation and also possible hybris. There is something epic in the work of the space shuttle programme, as there is in the building of a mediaeval cathedral. They are both complicated structures made by human beings by hand.” 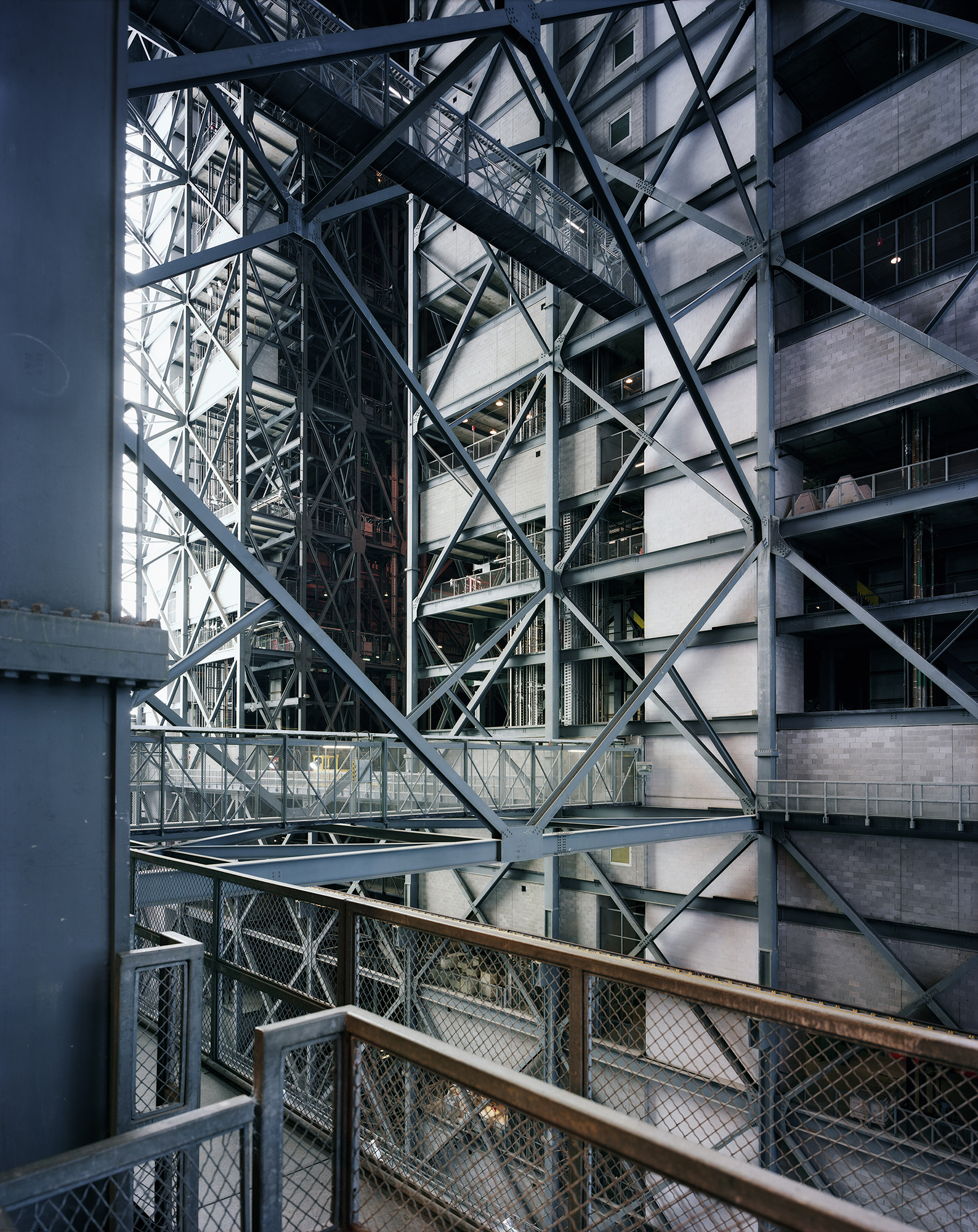 Vehicle Assembly Building, Kennedy Space Center, Cape Canaveral 2008, depicts the interior of a vast hangar in which the space shuttle is equipped with its solid rocket boosters and external fuel tank and prepared for the launch. This is one of the largest assembly buildings in the world; the bay doors alone are nearly 140 metres in height, which was necessary to allow the fully-equipped Saturn V rockets to exit the building in an upright position as they were moved to one of the launch pads. The vertical and diagonal elements define the structure of Struth’s photograph.
He used a camera with parallax compensation, to be able to achieve a rigorous shot. His photograph has a positively classical feel and in some ways recalls the 1920s; at the same time, however it has non of the experimentation of that period with its plunging perspectives, contrived angles and harsh contrasts. 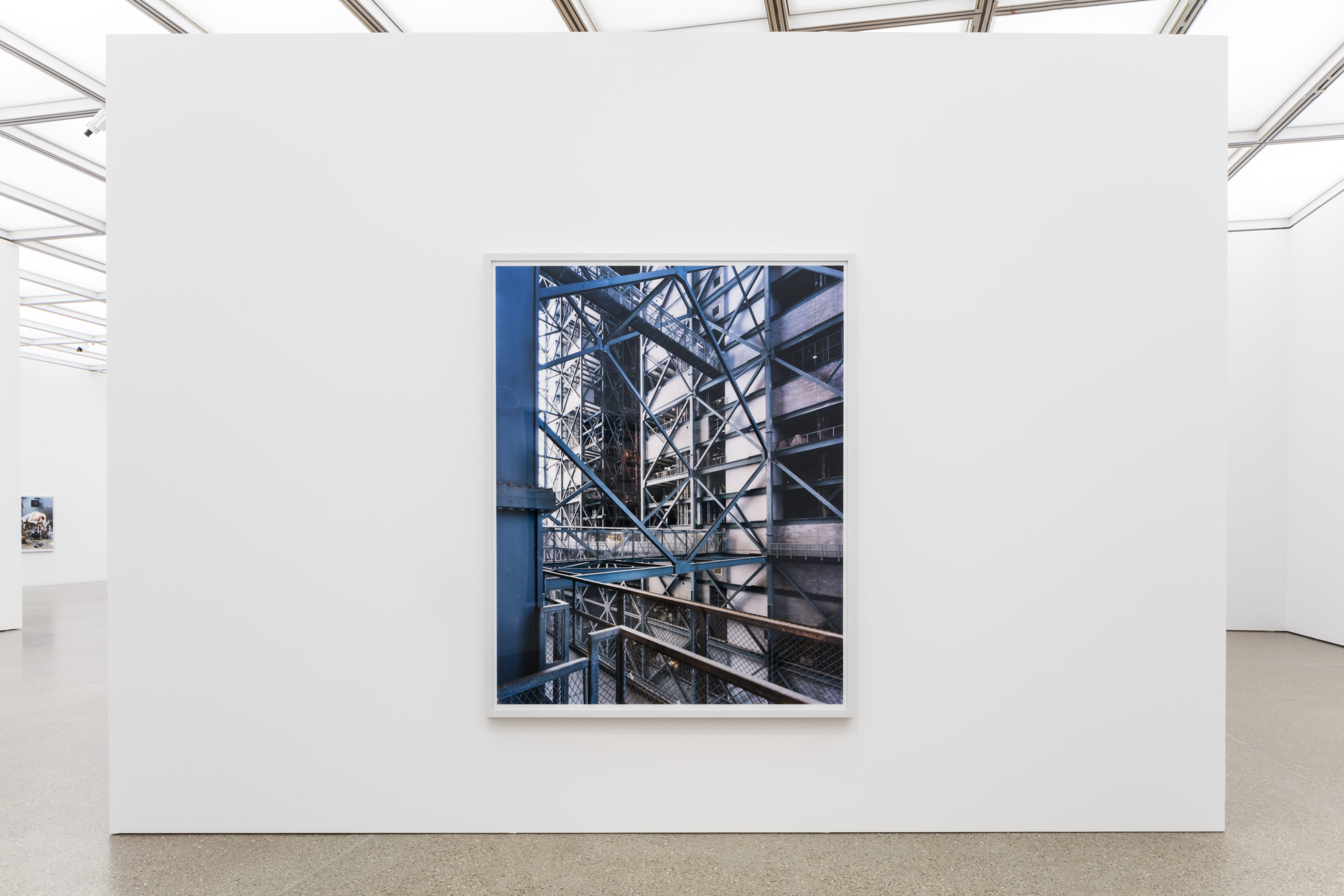 Installation view, Nature & Politics, Museum Folkwang, Essen, 2016
© Museum Folkwang / Sebastian Drën
” The viewer realizes at once that what they have been given to see goes far beyond their power to take it in, no matter how long or with what effort of scrutiny they give themselves over to the image (…) Indeed my further suggestion is that precisely this double state of affairs—the evocation of an unexampled density of intentional, purposive traces or indices that on the one hand compels the viewer’s close, not to say strained attention and on the other defeats from the start the viewer’s best efforts to make sense of what they have been given to see—is a major source, if not the major source, of the fascination that many persons have reported experiencing in the face of the technology photographs.”
⎼ Michael Fried, Thomas Struth’s Technology Photographs, 2020. 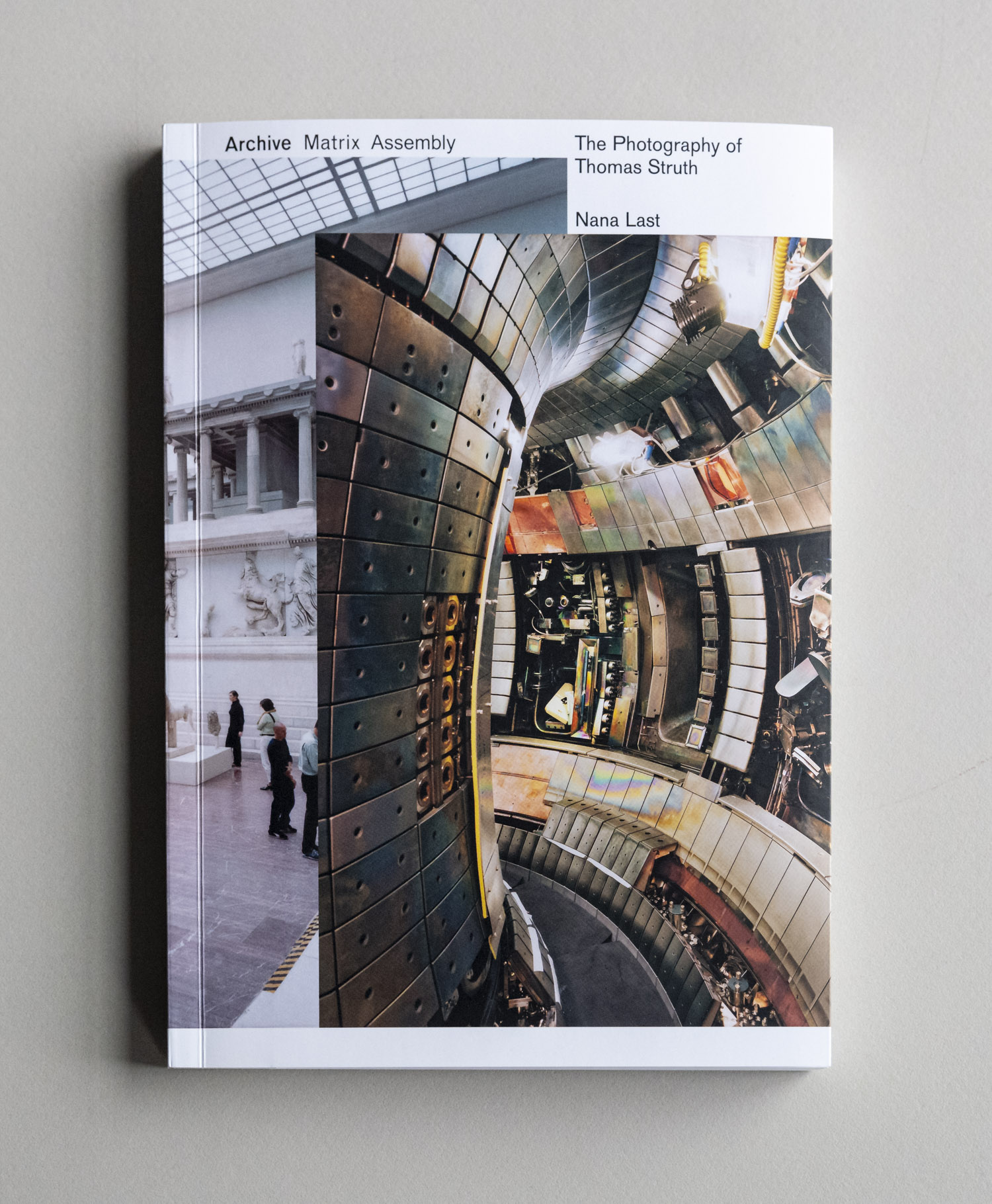 Archive, Matrix, Assembly: The Photography of Thomas Struth
Nana Last
2021
Published by Oro Editions imprint Applied Research and Design 267 x 178 mm English 200 pages Paperback
Archive, Matrix, Assembly: The Photography of Thomas Struth presents the first comprehensive, systematic theory of contemporary German artist Thomas Struth’s main body of photographic work from its beginnings in the late 1970s until his most recent work in 2018. The book presents a unique, evolutionary understanding of the work, proposing that it has established three stages of production: archive, matrix, and assembly. Together the three stages form a developmental system that characterizes the individual photographs, their relation to their subject matter, and how they form larger, significant collections of images. The book project accomplishes three main goals: it develops a comprehensive critical reading of the work, it serves as a monograph of the artist, and it provides an extensive analysis of the photographs at all stages, including the less discussed, more recent photography, which is placed on par with the earlier work for which Struth first became internationally renowned.
Additional Bibliography
Composition ’19. Thomas Struth at the Hilti Art Foundation, Published by Schirmer/Mosel, 2019

Photographs from Israel/Palestine, Published by MACK, 2014