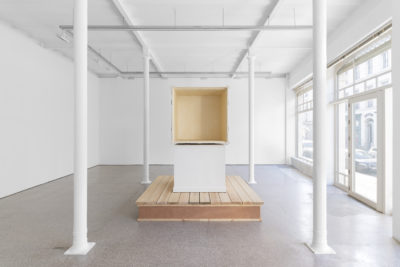 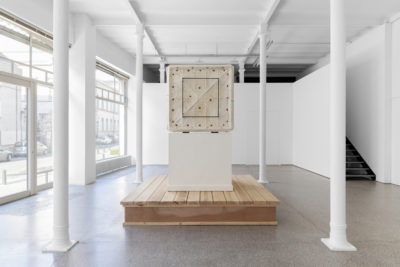 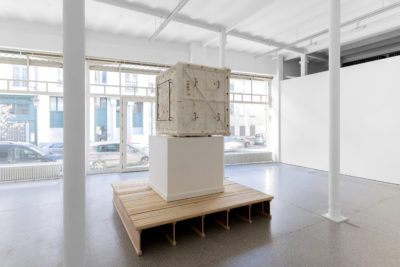 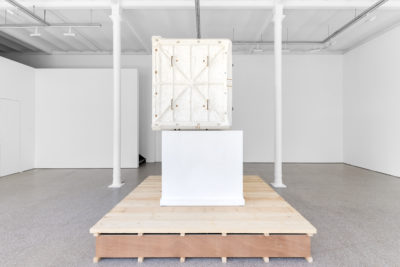 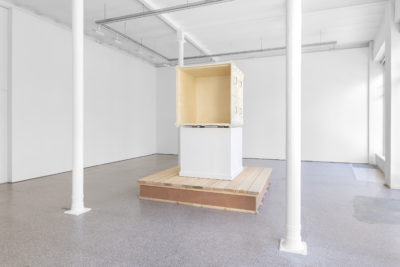 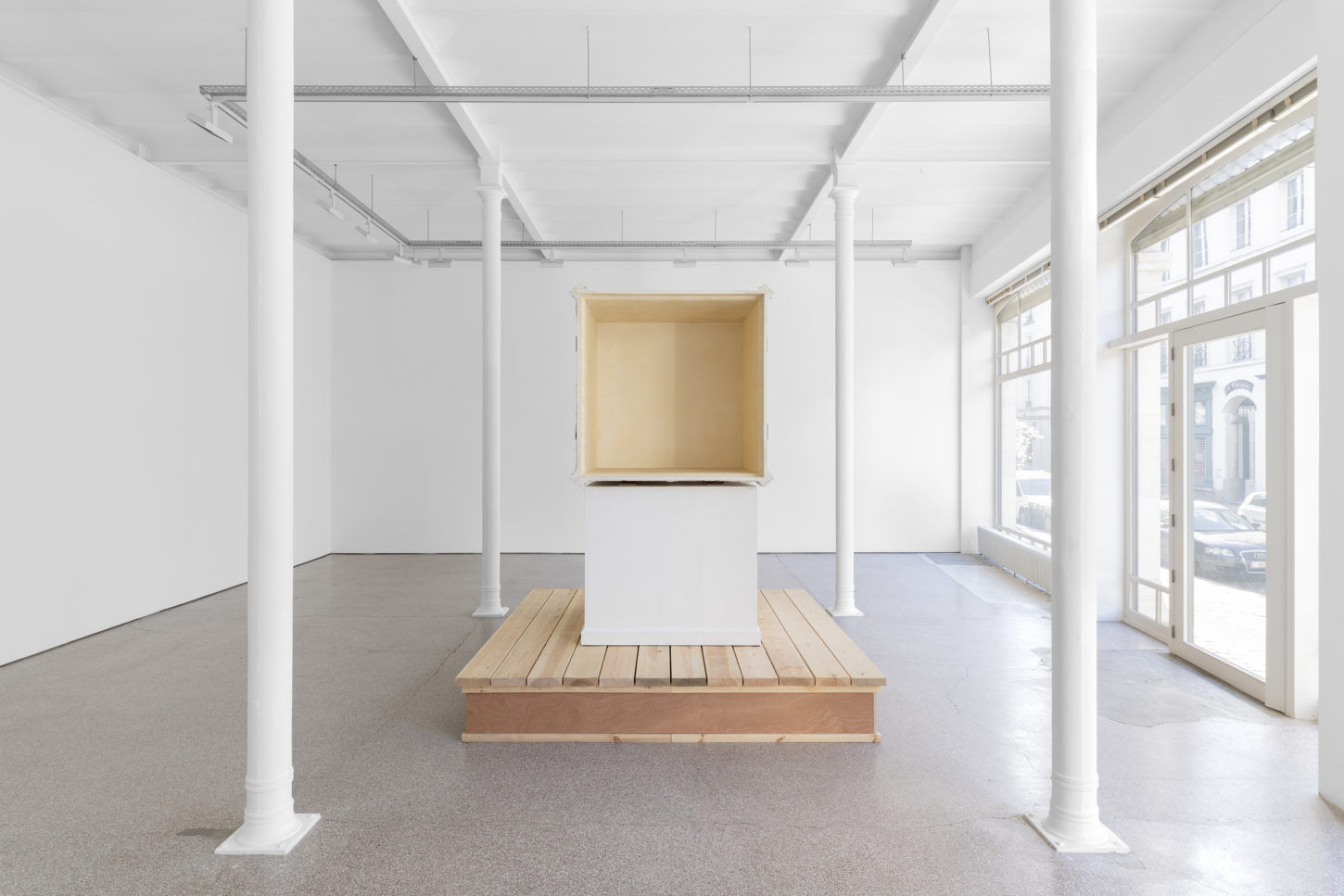 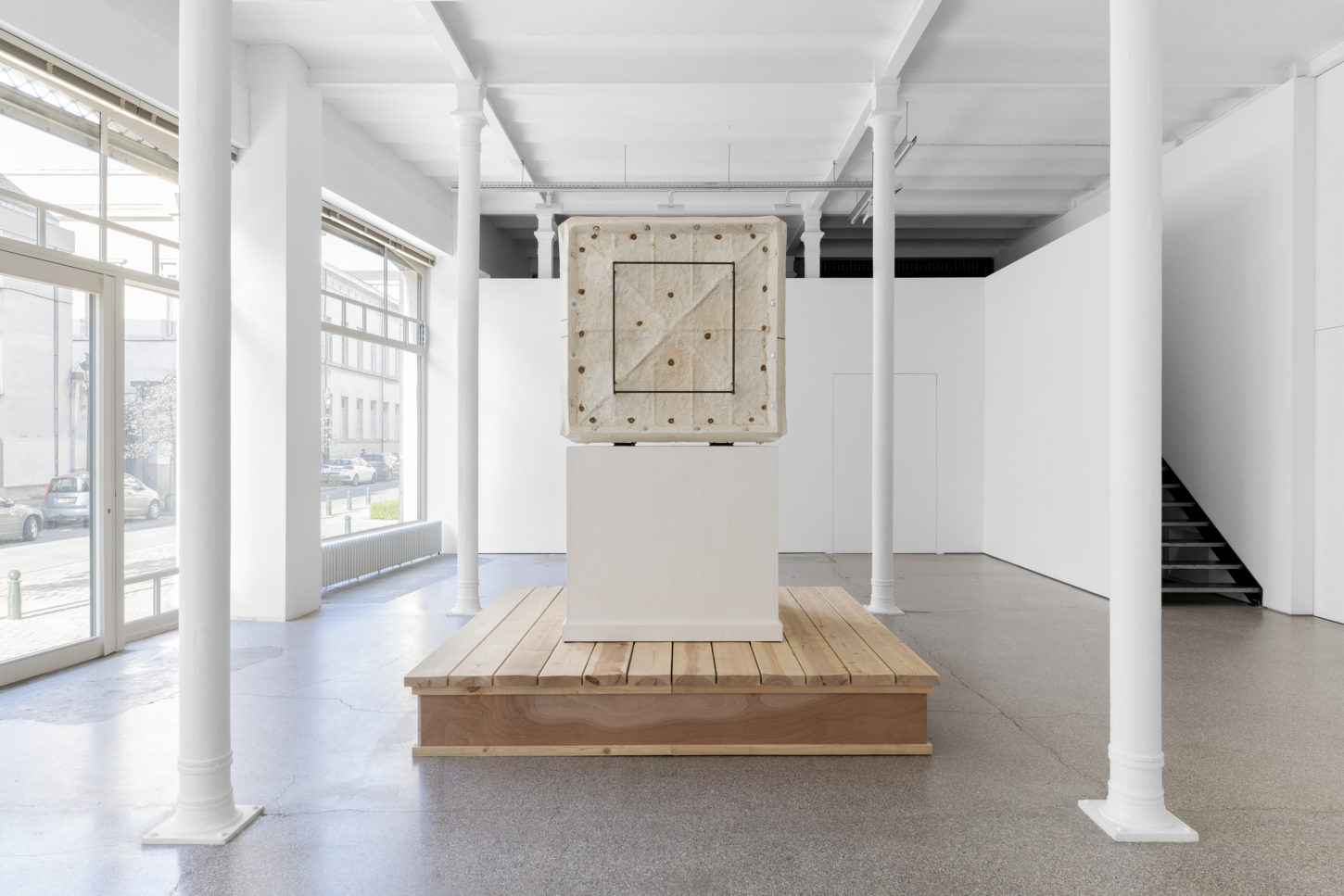 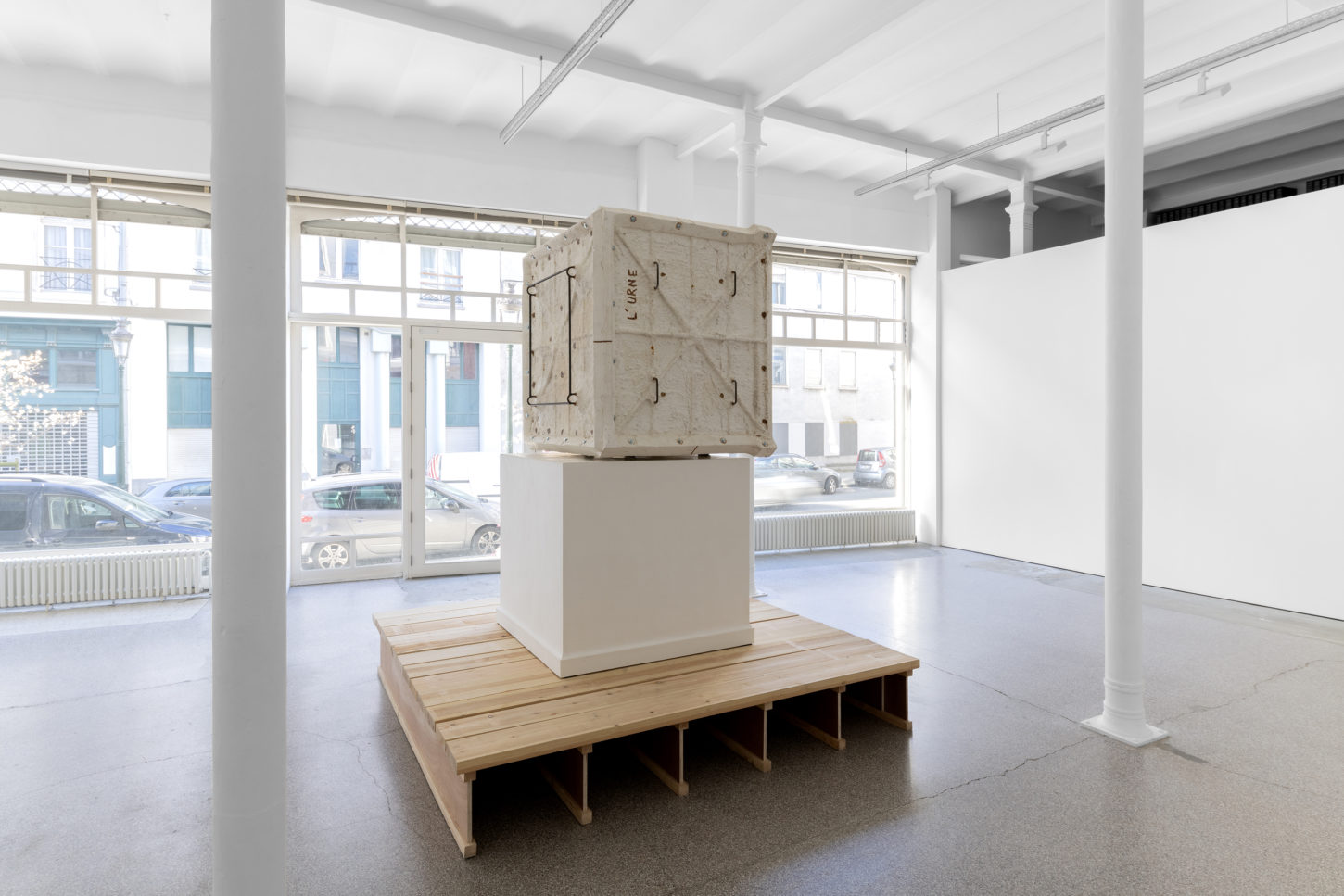 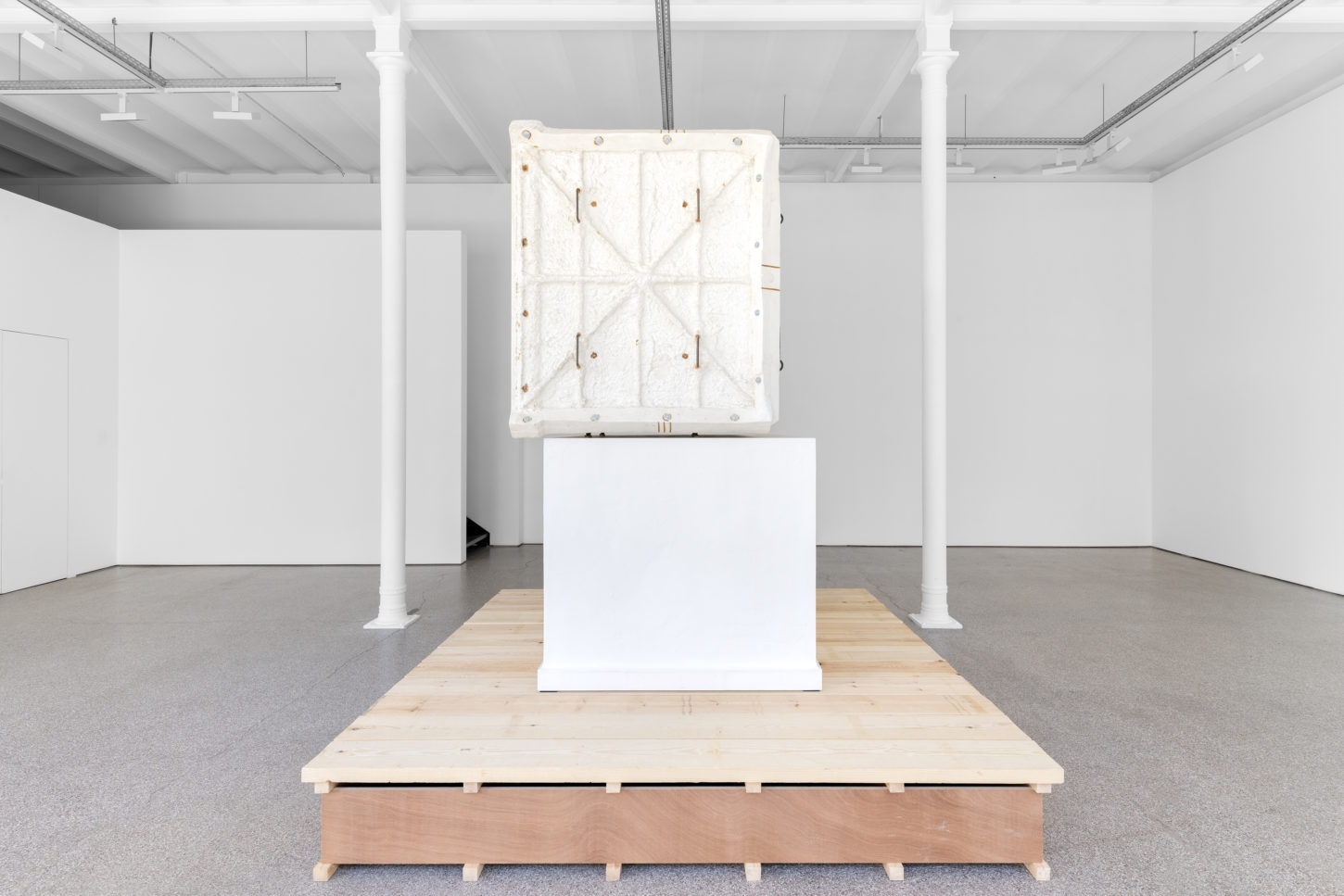 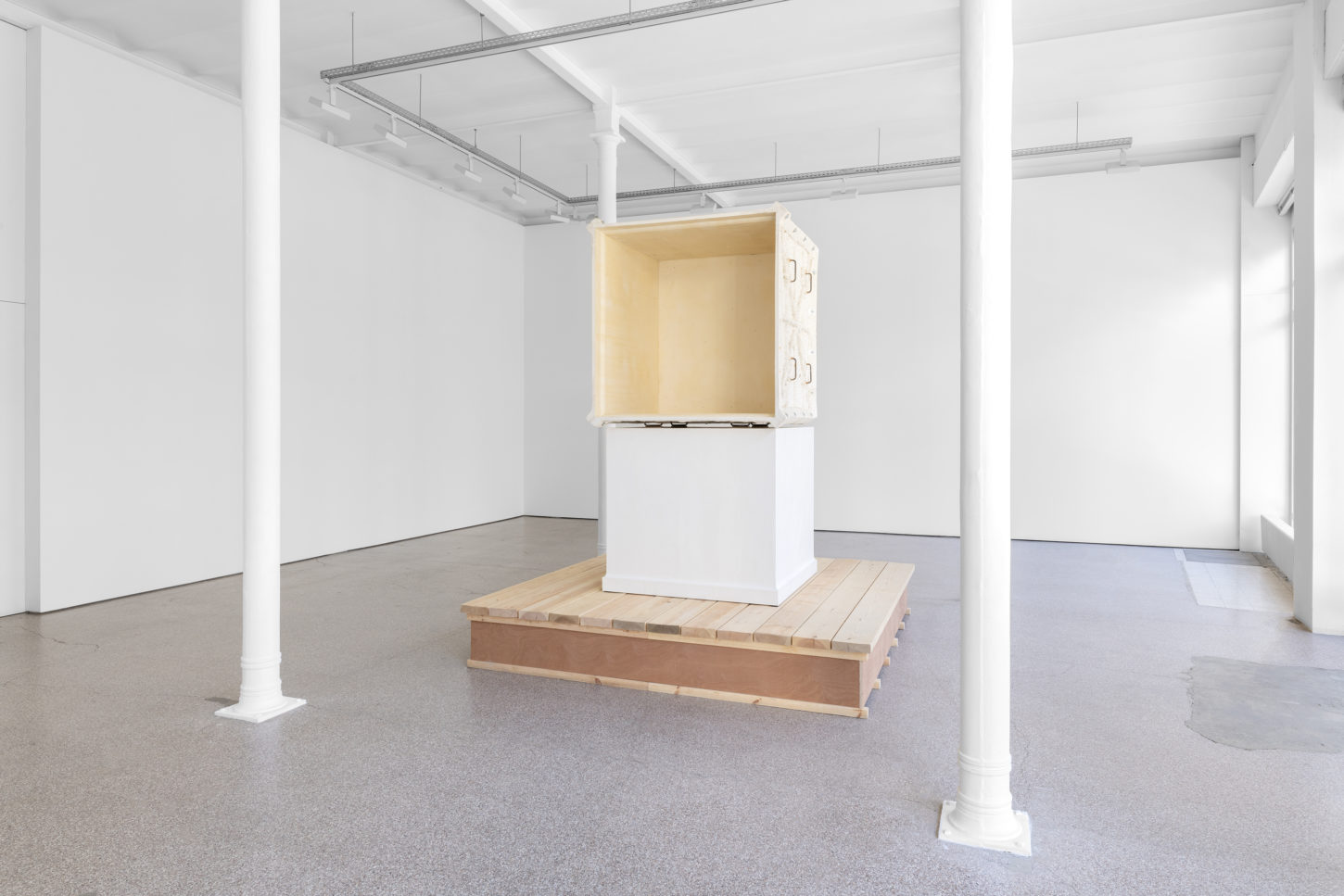 In Didier Vermeiren’s Cariatide à l’urne (1996), the plinth and the sculpture, the plaster and the mold, the body and its mass indiscernibly come together as one to form a total object. A large plaster base exhibits its own mold, leading us to question which one is really supporting the other?

Modeled after the plinth of Rodin’s Fallen Caryatid Carrying an Urn this plaster pedestal, along with the mold that was used to cast it, rest on yet another lower and wider wooden platform. This platform precisely borrows the material traits and dimensions of a display originally devised by Rodin himself, and subsequently replicated in the plaster gallery of the Rodin Museum in Meudon. Thus one could say that Vermeiren’s is a replica of a replica, even though that word seems beside the point for a sculptor who considers recollection as his primary material.

For Vermeiren, sculptures are tangible ideas; they are embodied recollections that allow for the past and the present to be imbricated like a positive in a negative. Throughout his work, sculptures always refer to other sculptures, both his own, and those of his predecessors. Historically, Rodin was the first sculptor to model his own bases for his figures — a development that prefigured the work of Brancusi who considered the plinth as an inherent part of his sculptures. Perhaps their shared enthusiasm for photography and its merging of space onto a single plane is also characteristic of their concern for what it means to put something on display — a concern that Vermeiren understands as he works to transcend it.

Rodin’s approach to form in his figures was once described by Leo Steinberg as “a viscous flow that melts and reconstitutes itself before our eyes.” Likewise, the three elements stacked and combined with a perplexing kind of simplicity in Vermeiren’s monumental sculpture suggest movement. This movement evidently occurs through our physical presence as we move around the work, but also through the interplay of support structures conceived by the artist. Deprived of their traditional function, these amalgamated display systems have us confound subject and object. In the midst of this confusion, the caryatid emerges as a freestanding figure — weightless and almost unrecognizable, but undeniably present.