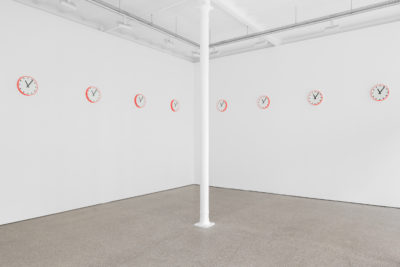 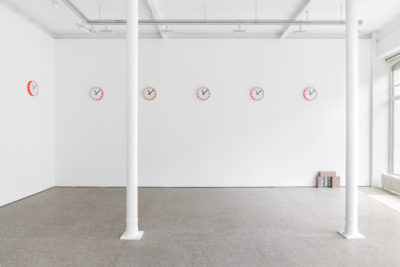 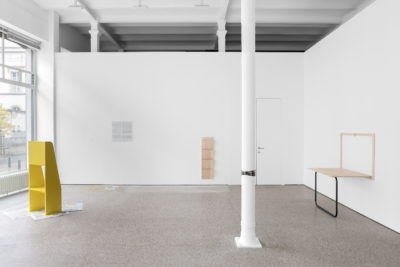 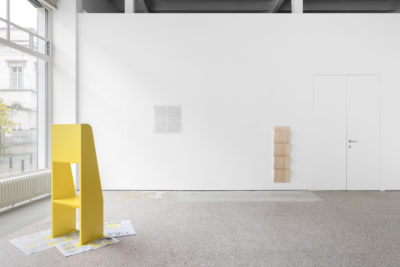 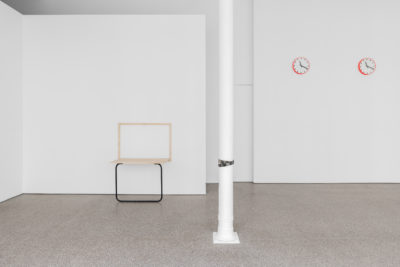 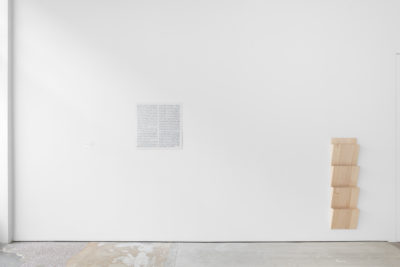 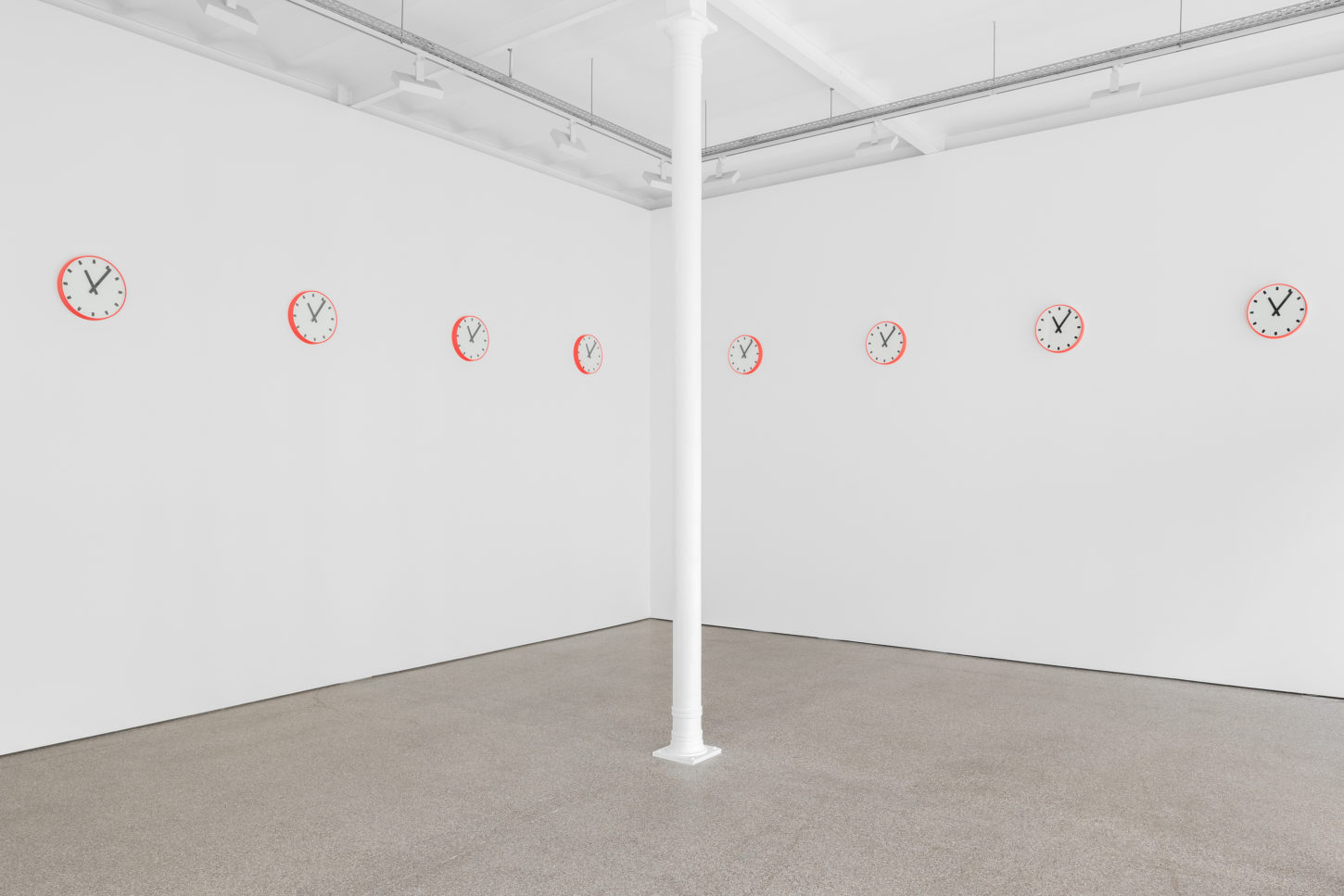 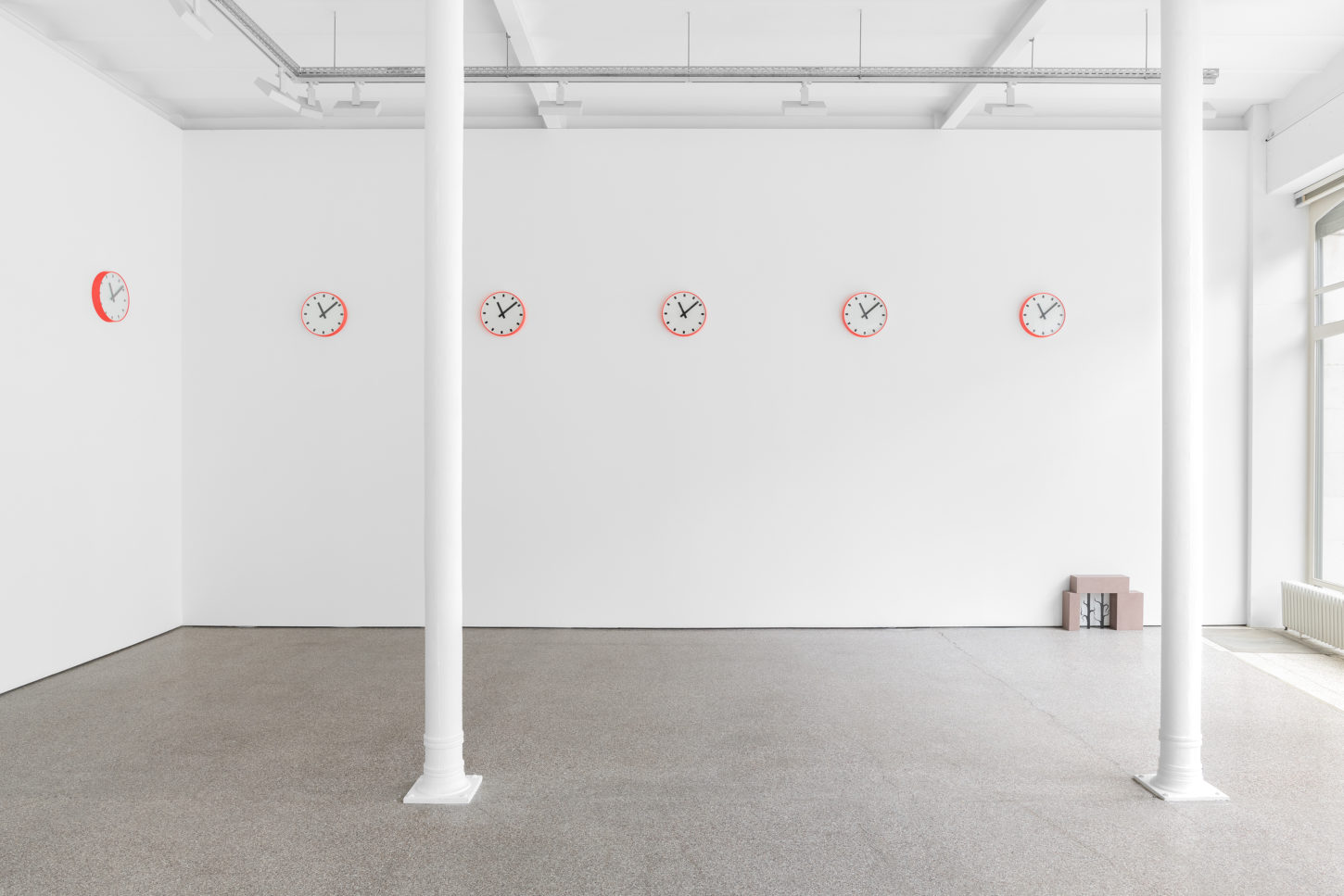 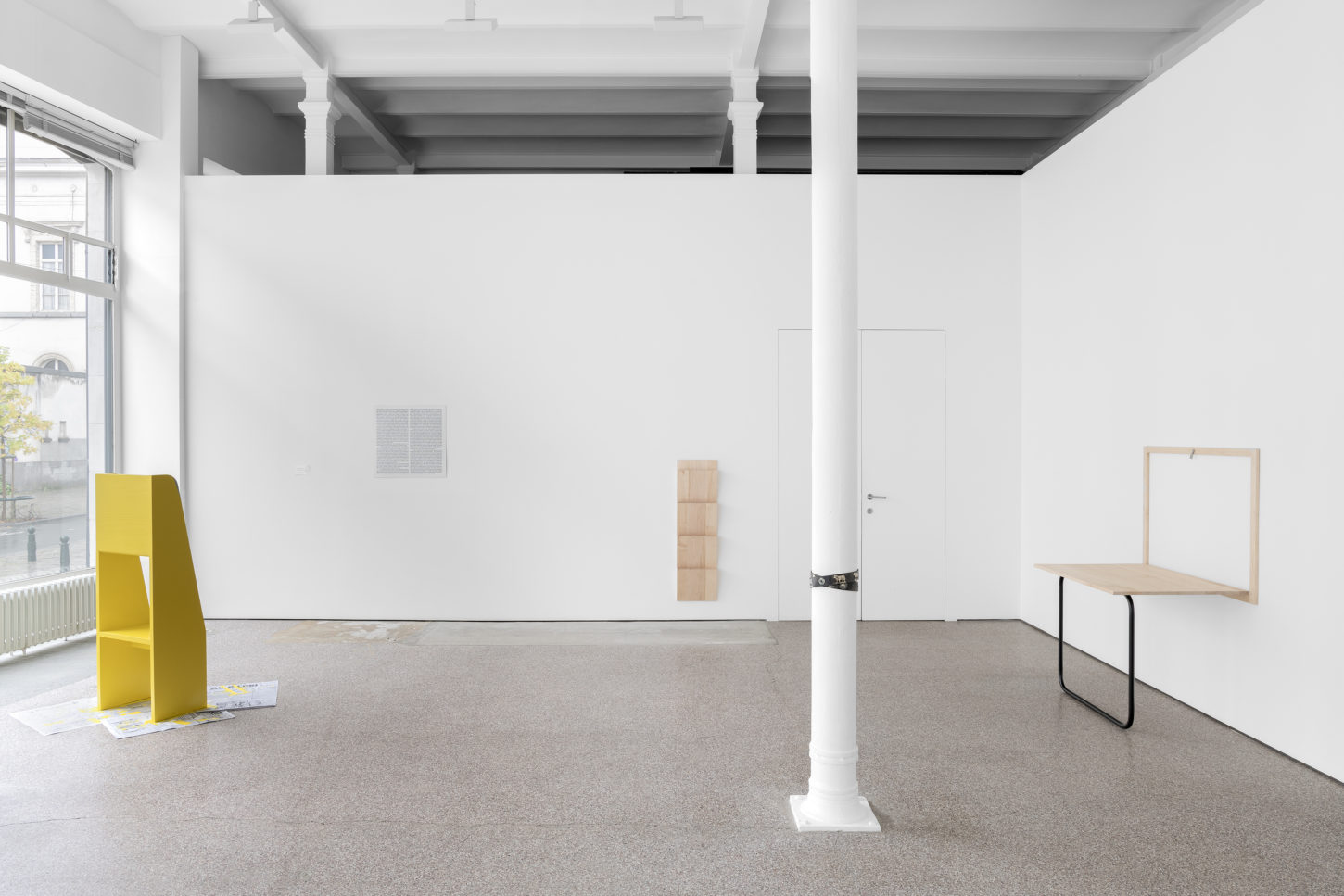 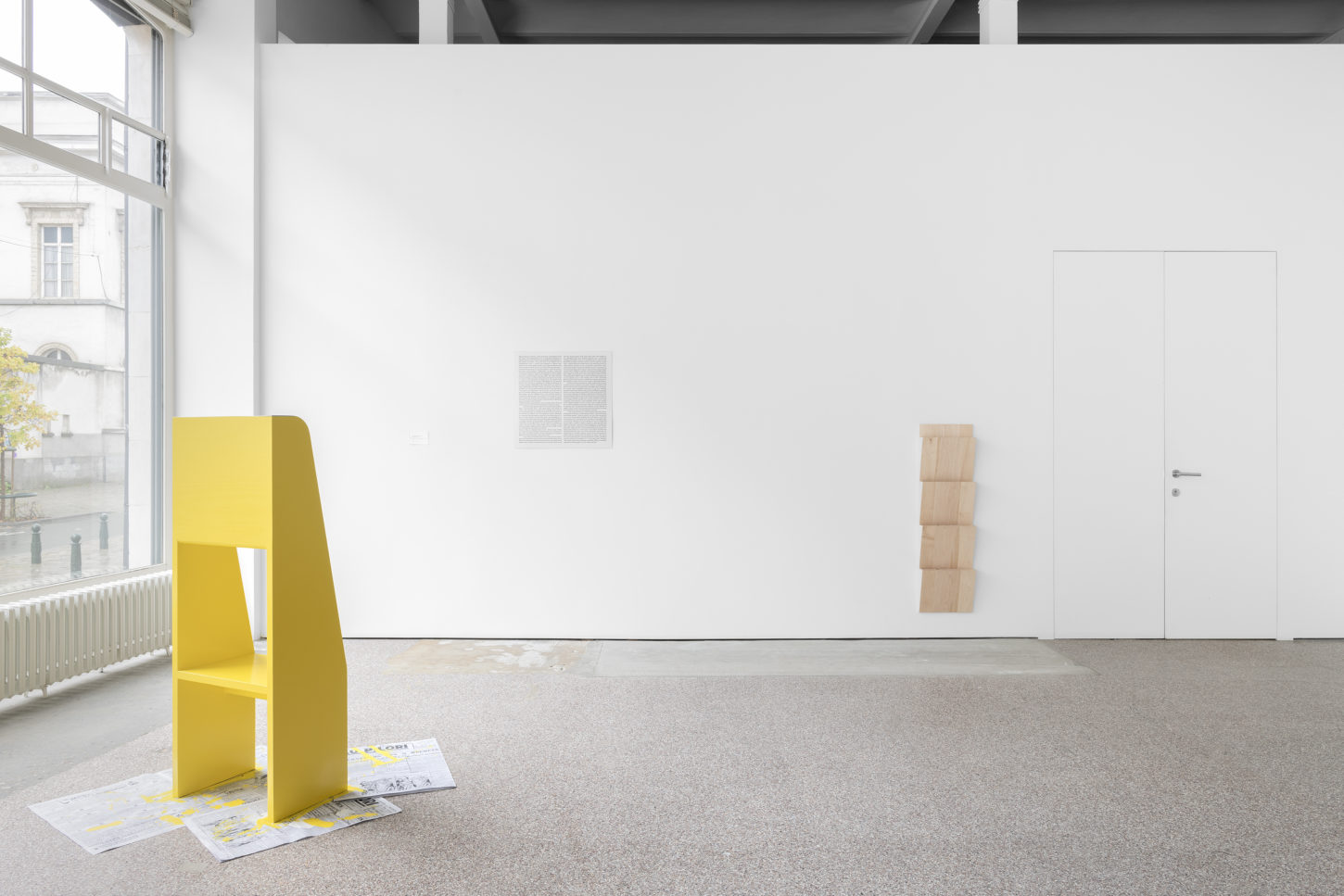 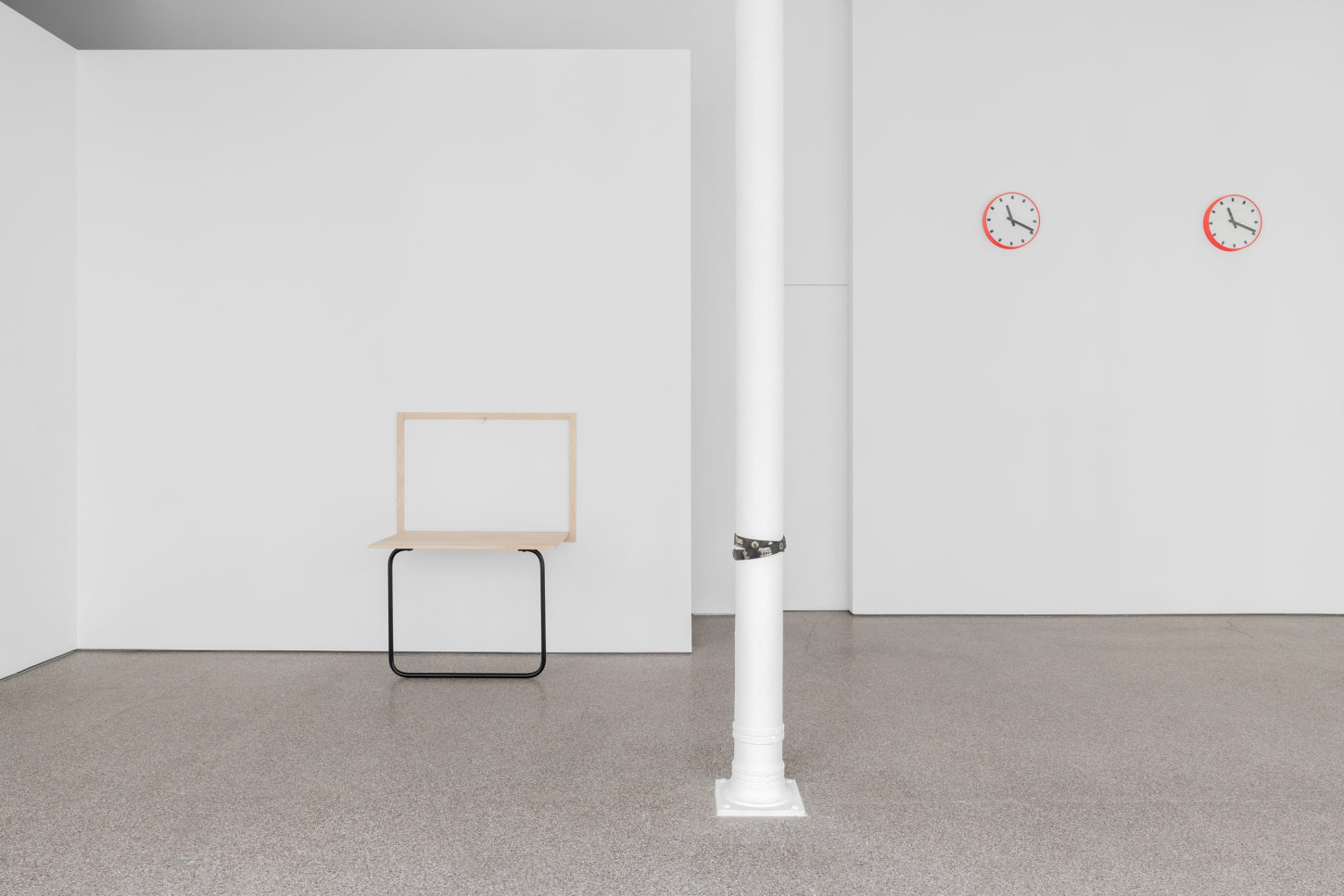 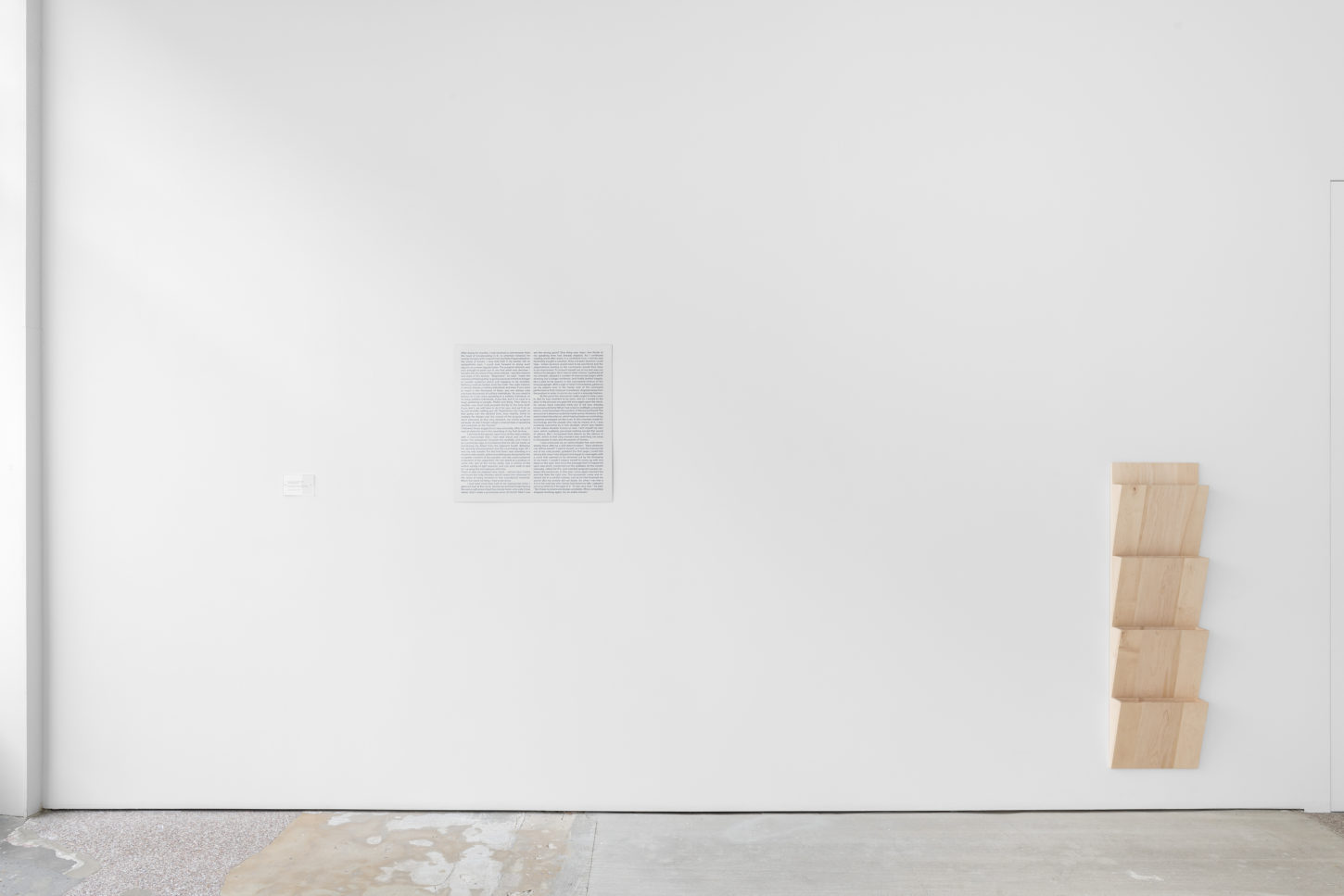 Used to measure, keep, and indicate time, clocks and timekeeping tools are amongst the oldest human inventions, they respond to our need for quantifying intervals of time shorter than natural units (day, lunar month, year). Although clocks in public buildings no longer govern the rhythm of daily life the way they once did in schools, factories, churches, the same notion of time remains the basis of socioeconomic order worldwide. In juridical matters, time also gages the relationship between how grievous a misdeed is deemed, and the sentence that ensues for the accused individual.

Composed of twelve Swiss made wall clocks, the piece titled Two revolutions a day was originally intended as an art project for the most recent facilities of Zurich’s criminal police. Ny’s modified clocks borrow the corporate identity of the Kriminalpolitzei by using the signature bright orange colour found on their vehicles. The shape of the black index on the dial of the clocks is based on the outline of the artist’s third phalange; a reference to antiquity where this finger represented the phallus and was therefore named digits impudicus, which became know as a symbol of contempt in many cultures.

As “private individuals”, our use of everyday objects results in traces left on the belongings of the domestic interiors we inhabit. “To dwell means to leave traces” (1). The majority of these traces are also the fingerprints used by the police during investigations. Still today, fingerprints are the most fundamental and reliable “tools” used to identify individuals. Oftentimes, artworks tent to escape these repeated manipulations, “they are not subject to the use of living creatures”(2) and like the moving arms of clock behind glass, they reside traceless in their Gehäuse as if unaffected by touch and the passage of time.

Whith the yellow painted Manikin (Au Pilori), Sophie Nys refers to the current political climate and to her earlier body of the work The Drunkard’s Cloak (2010), where a collection of rudimentary objects alluding to pillories were painted in this same bright yellow colour – a colour historically associated with shame and betrayal. To protect the floor while painting this piece, she used facsimile pages of WWII French anti-Semitic newspaper Au Pilori.

In 1940, German Jewish philosopher and cultural critic Walter Benjamin committed suicide on the border between France and Spain in fear of being captured by Nazis. In 1934, under the pseudonym Detlef Holz, Benjamin published an essay titled “Auf die Minute” (On the Minute) in the Frankfurter Zeitung. In this text, he described his first experience in a radio studio. By 1934, the German national socialist government had gained full control over radio broadcasting stations, and each management board had to include a representative directly delegated by the interior minister to supervise the programing.

Tied around the column of the gallery, Das Boot its voll (The Boat is Full) borrows the title of a 1981 drama set during WWII where a group of six refugees attempt to cross border into “neutral” Switzerland. In this movie, a local policeman orders the deportation of the newly arrived immigrants who tried to pose as a German family in a small village.