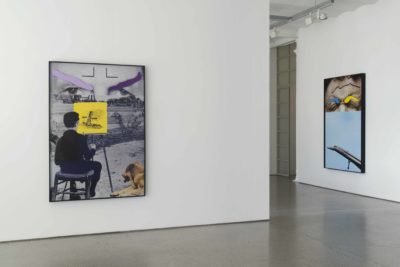 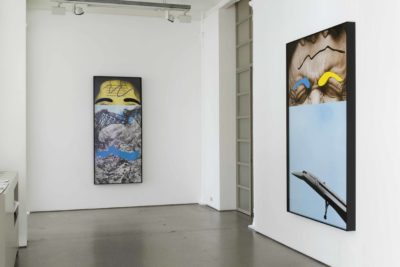 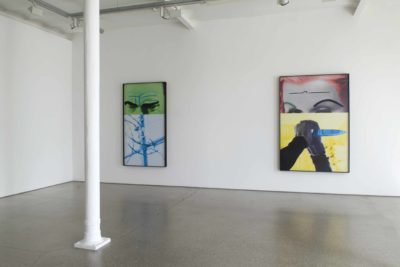 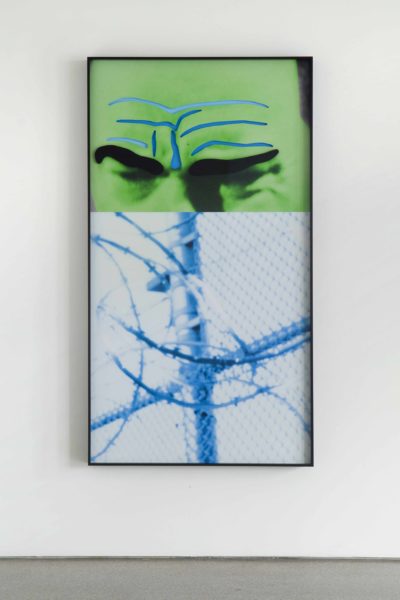 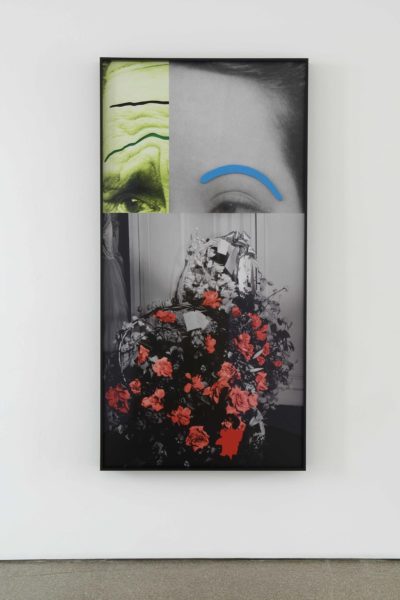 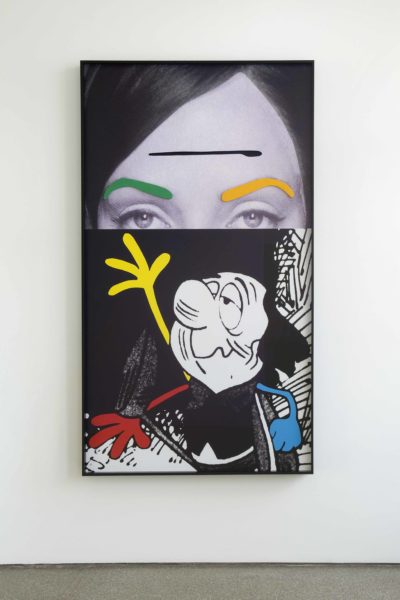 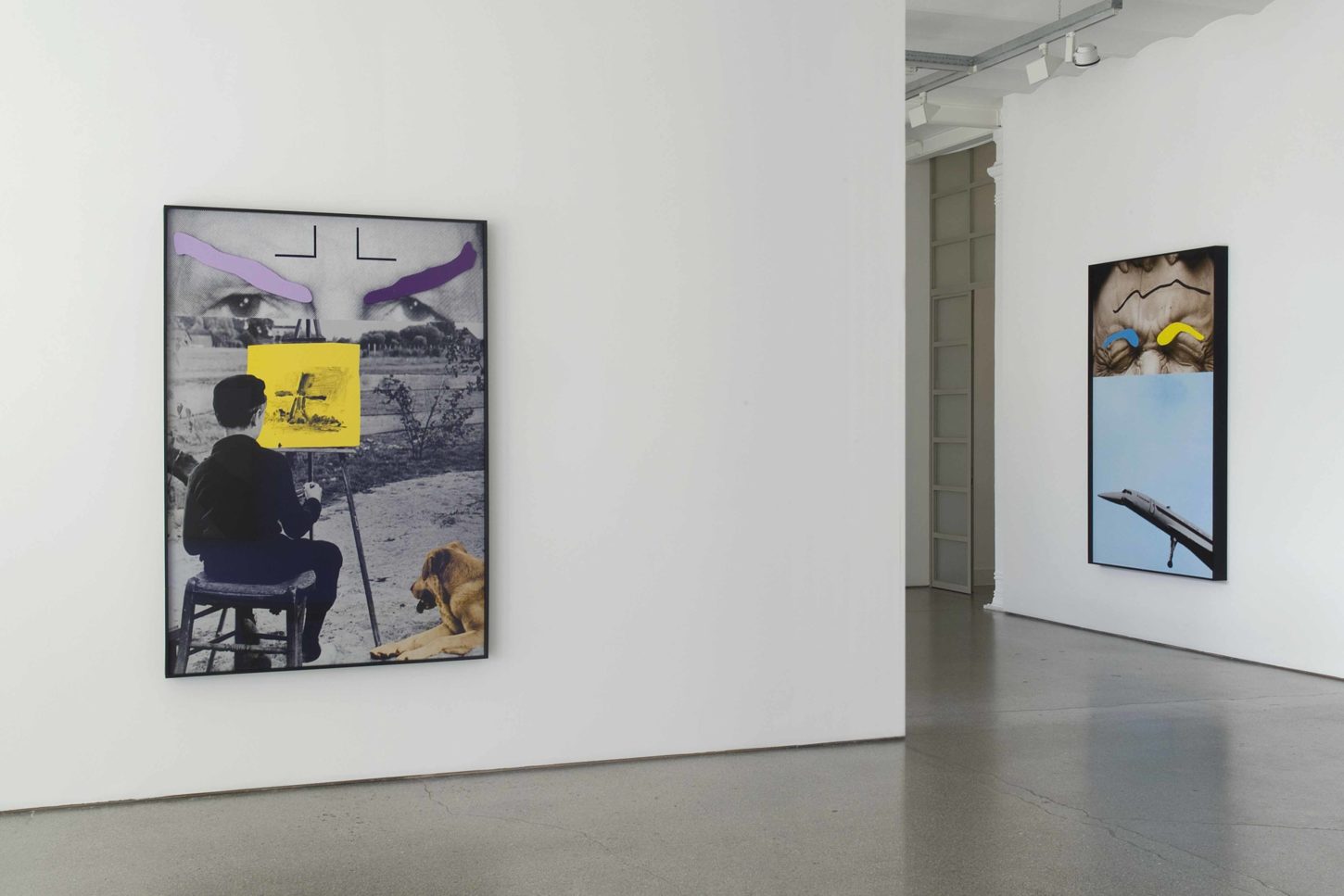 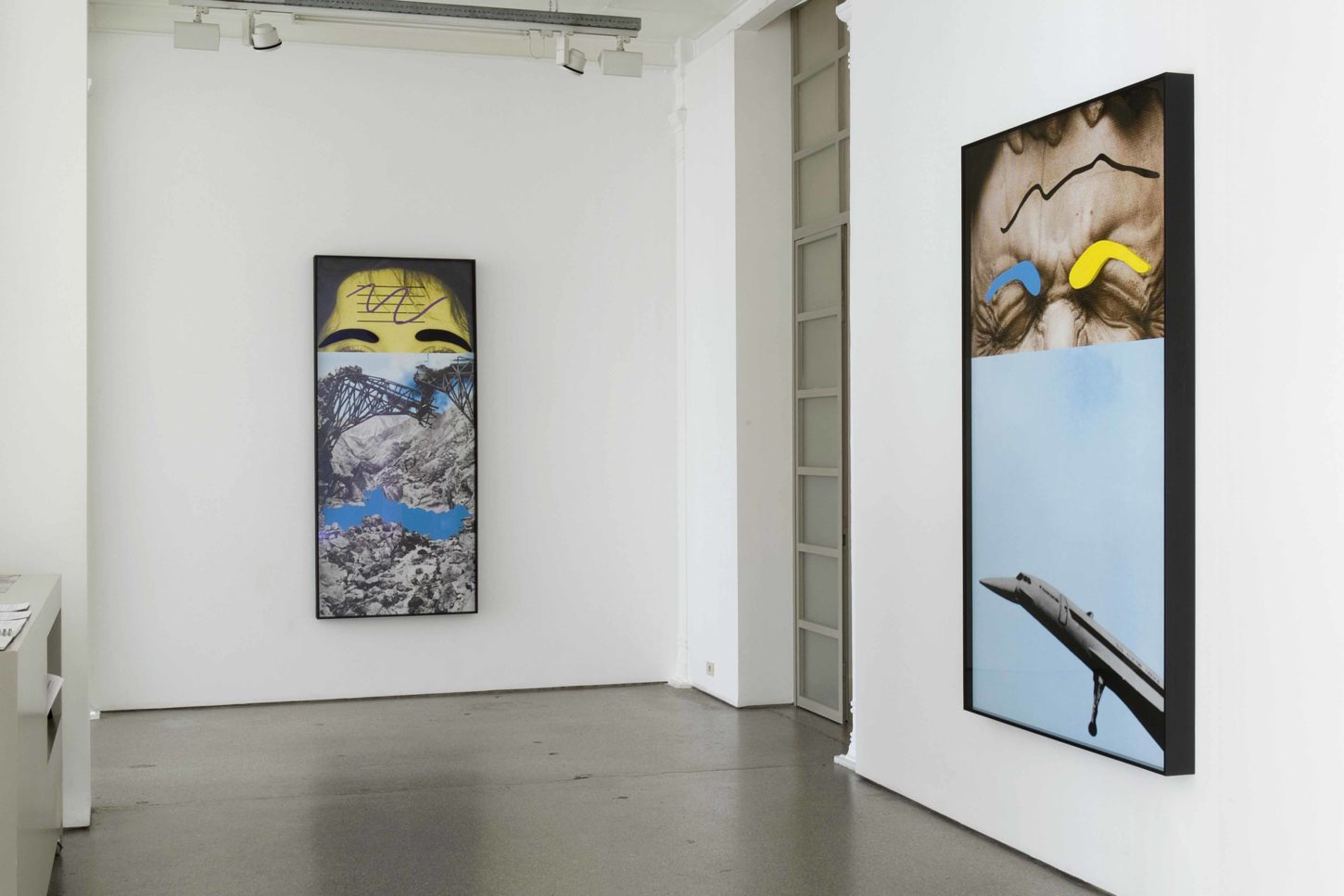 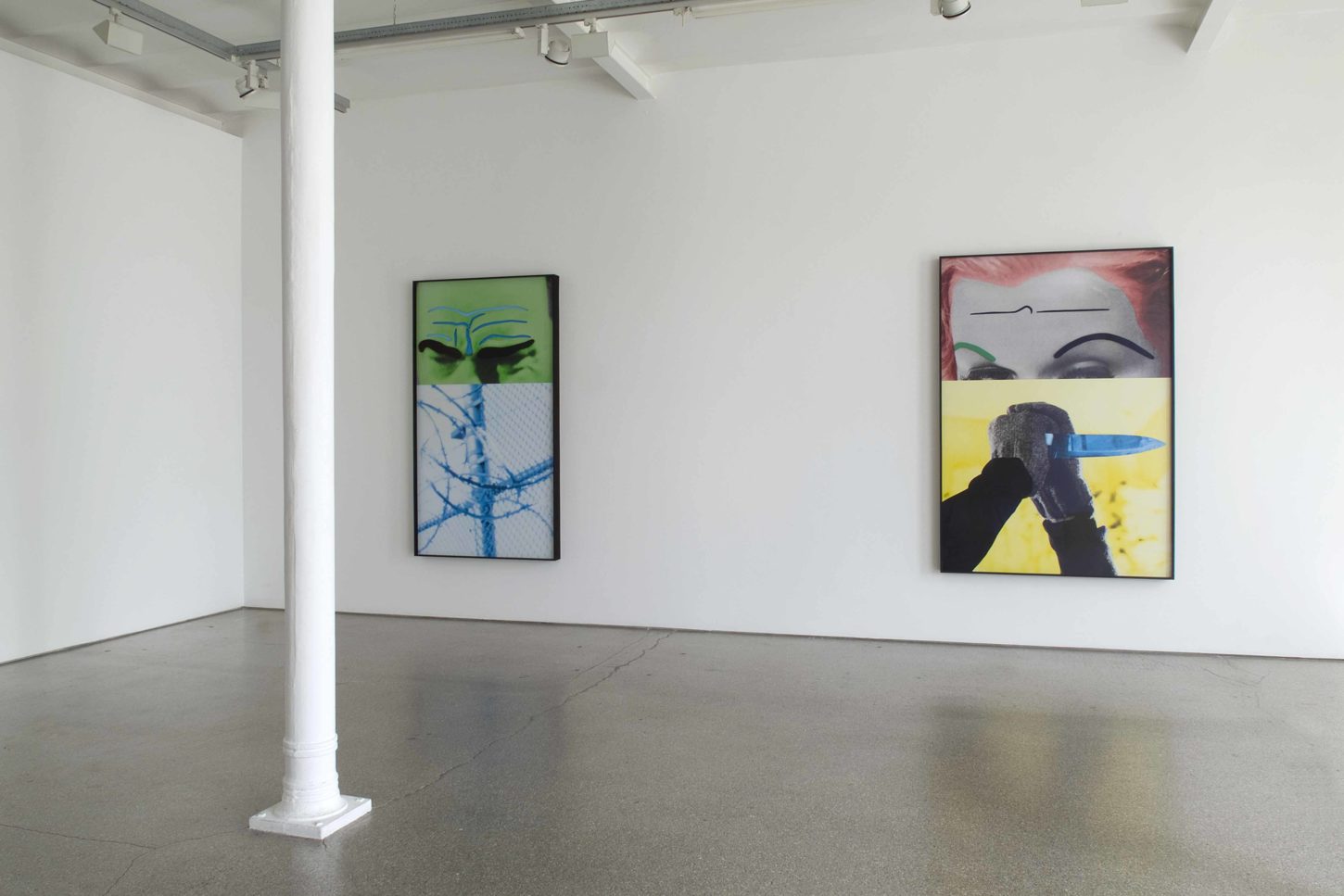 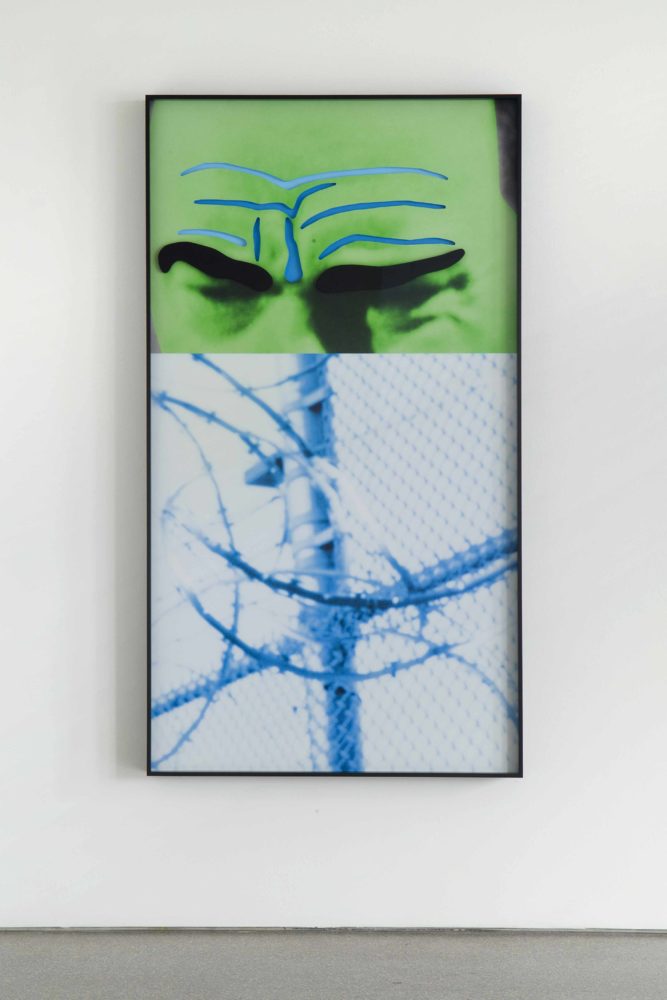 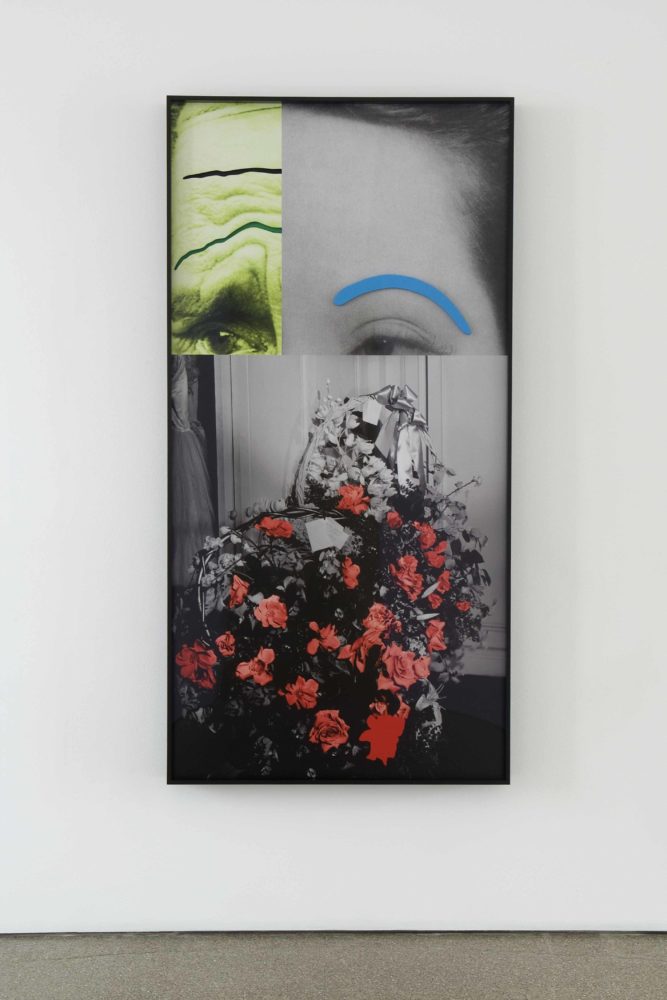 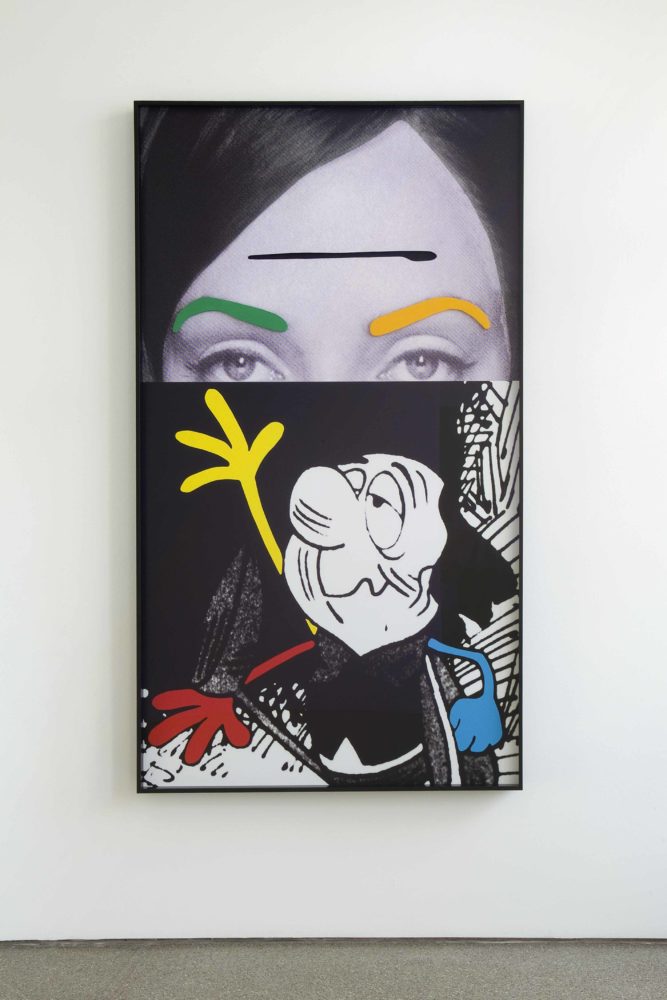 « Raised Eyebrows / Furrowed Foreheads » is the direct continuation of the previous series in which the artist associated fragmented body parts with coloured planes, three-dimensional forms, and language. Under the titles «Noses & Ears, Etc », « Arms and Legs (Specif. Elbows and Knees), Etc », and « Prima Facie, Etc », these series dealt with the specific issues that have constantly been featured in his work: the relationship between the separate parts and the whole – what to leave out and what to leave in – and the introduction of a hybrid visual language that strives to multiply interpretations through changes, cuts, omissions and shifts of meaning.

The ‘ Prima Facie » series (the fourth series of which was shown in Greta Meert Gallery in 2005) initially consisted in associating the expression of an actor with the word that emerges at the first impression. The faces, from stills from the film archives collected and recycled by the artist, are reframed in close-up, which break off any connection with the context of the scene.

« Raised Eyebrows / Furrowed Foreheads  » again uses one single expression and features it throughout the series. With a considerable degree of humour the artist refers to the uncertain interpretation – at once surprise or dismay, anger or scepticism – and seems to tell us: ‘ Aren’t we all worried? – These works may well be a description of this condition ».

Faced with the anxiety caused by the of media images that show us a world that is unremittingly rushing towards disaster the artist offers resistance. Multiplying the planes of an image by editing, giving physical consistency to the image with masking paint, taking the image to the borderline between fiction and reality….

all moves that aim at alienating the viewer’s submission to the image.

From the photo-text paintings in the 60s, the conceptual works and the video art in the 70s, to the « found images » of the 80s, John Baldessari has brought into being a language that is all his own. He is one of the artists that moved the centre of gravity from New York in the 60-70s to Los Angeles. His influence, not only as an artist, but also a teacher, has been considerable.

In 2008 he received the B.A.C.A award, during his exhibition in the Bonnefantenmuseum, Maastricht.

Currently « John Baldessari : Brick Bldg, Lg Windows w/ Xlent Views, Partially Furnished, Renowned Architect » is shown in the Museum Haus Lange in Krefeld (until 1 June). In October 2009 a retrospective show will open in the Tate Modern, London, which will subsequently travel to the MACBA in Barcelona, the LACMA in Los Angeles and finally the Metropolitan Museum of Art in New York (until 2011). A catalogue is to be published.

During the next Biennial in Venice he will be awarded, the Golden Lion for Lifetime Achievement, together with Yoko Ono.