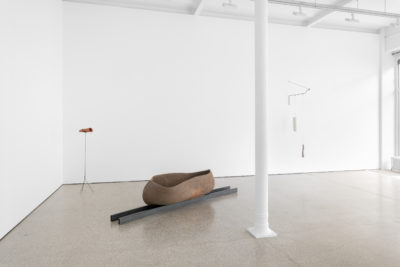 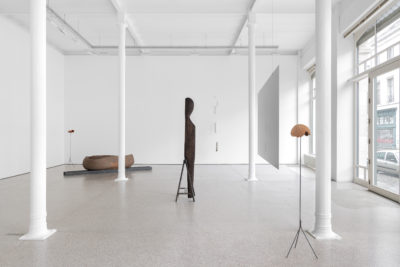 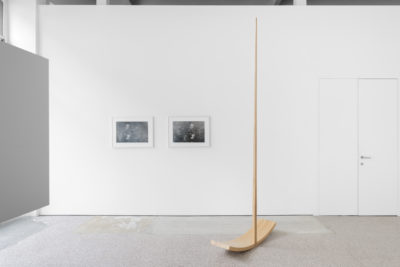 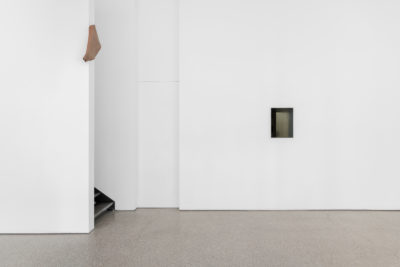 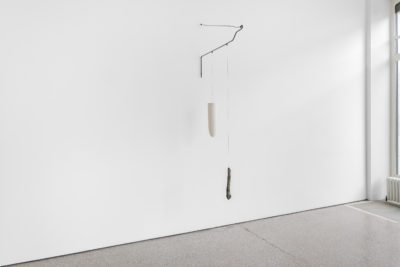 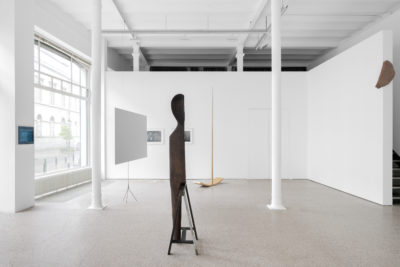 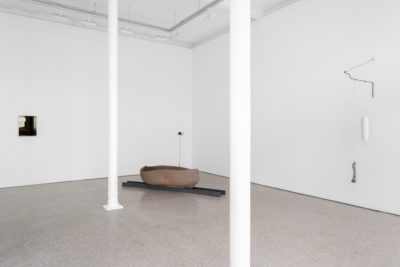 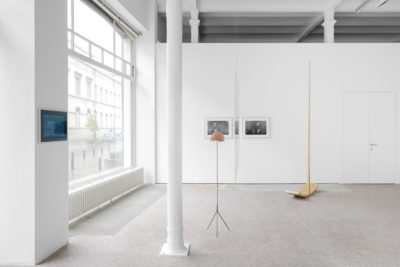 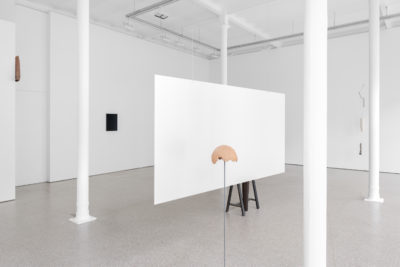 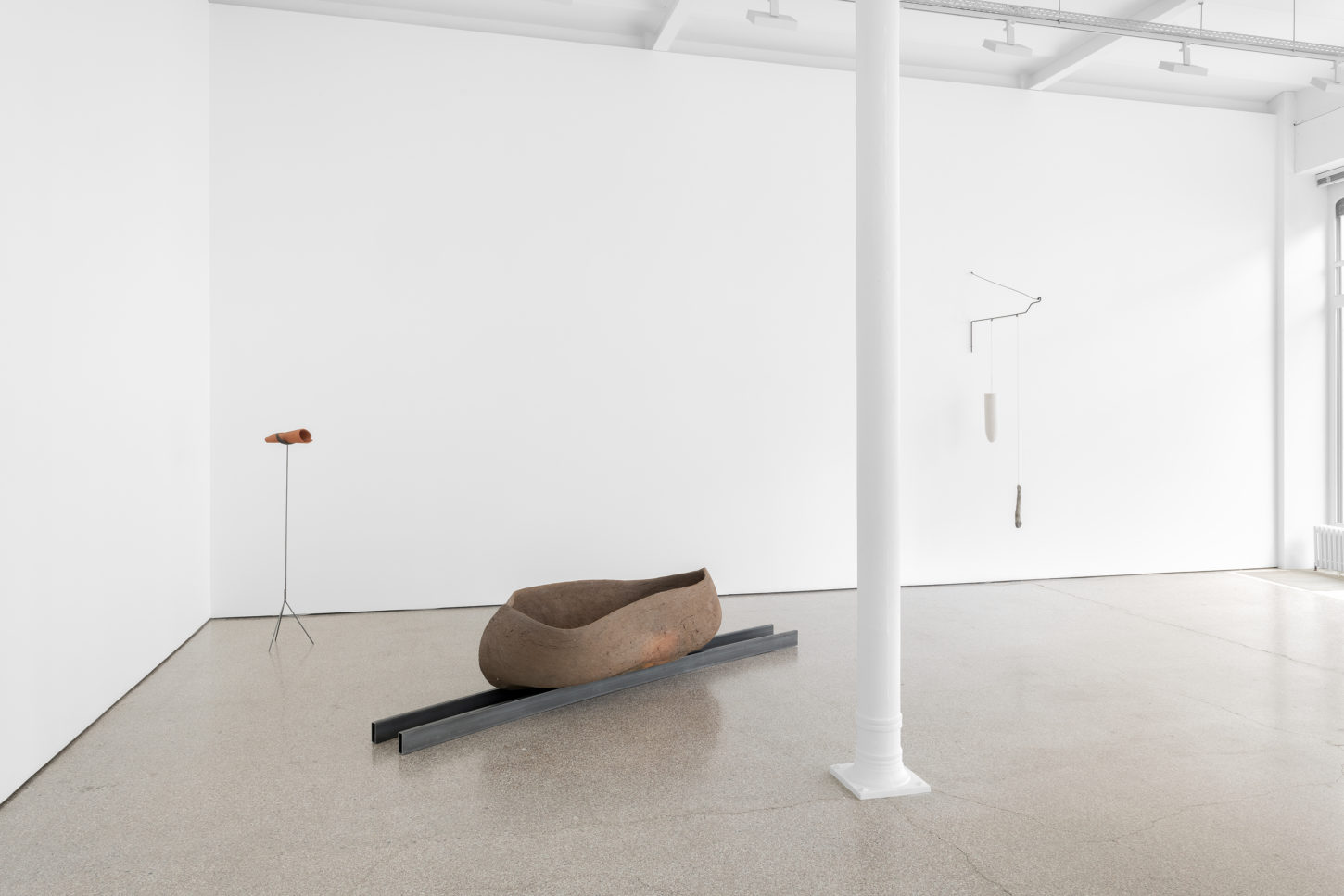 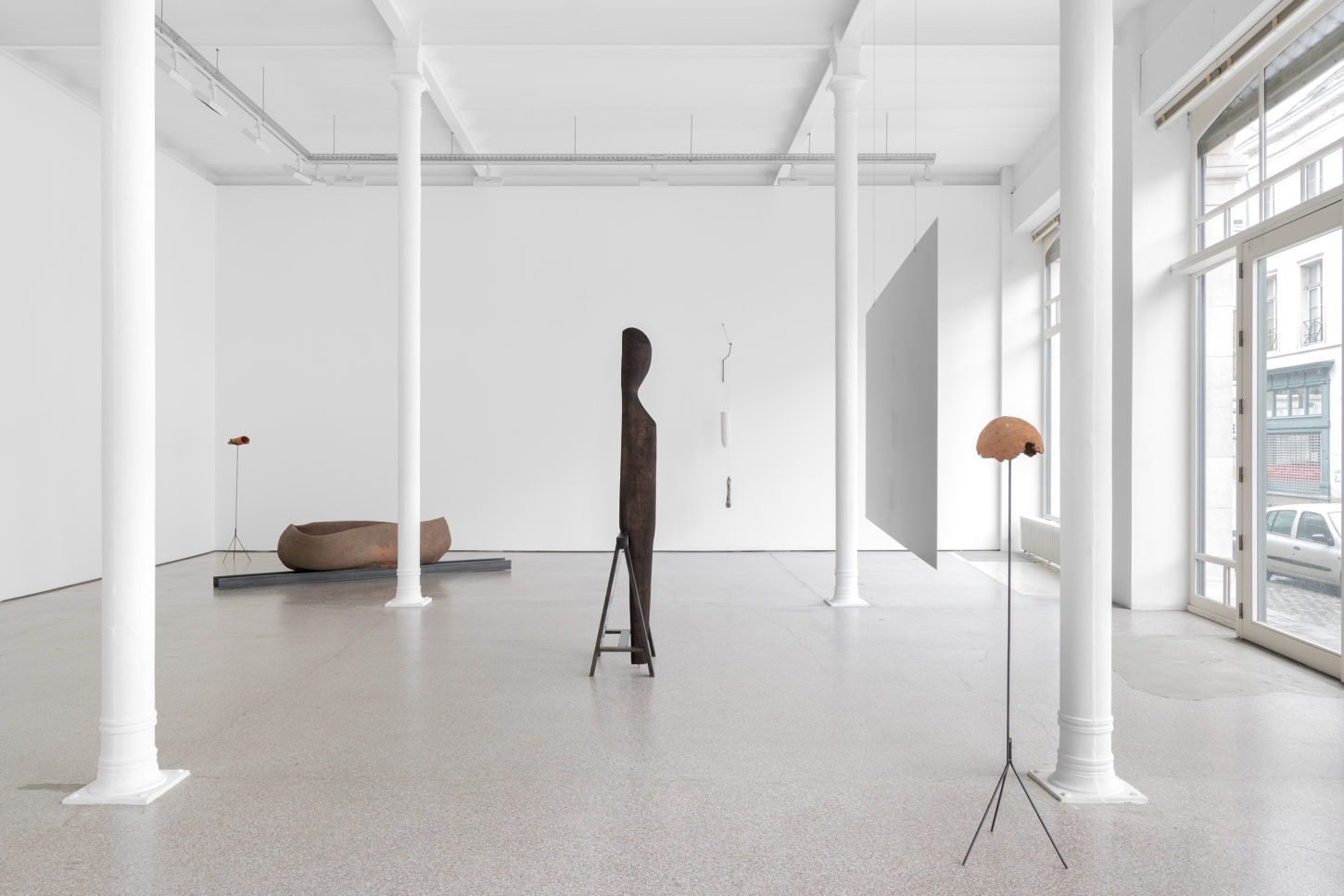 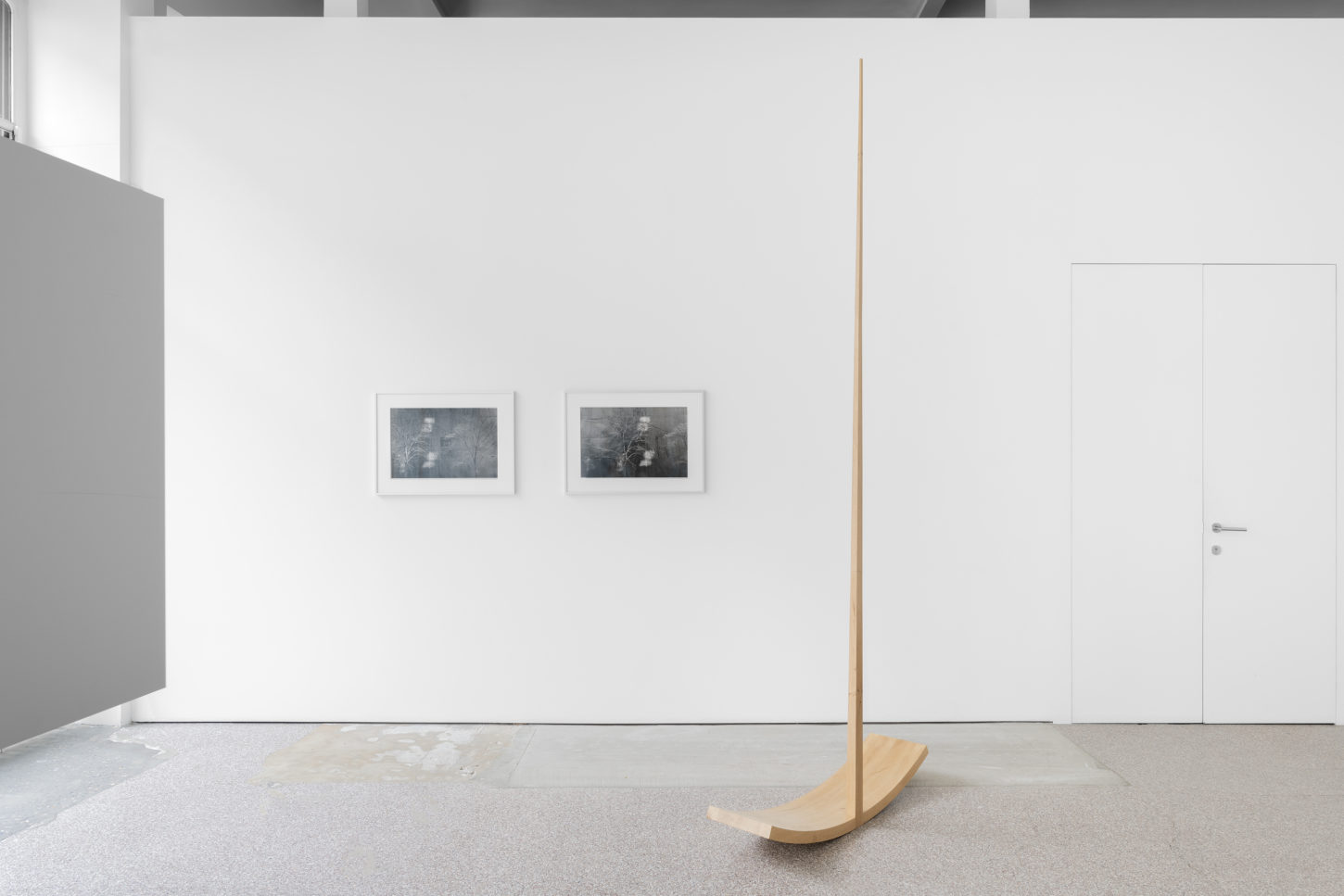 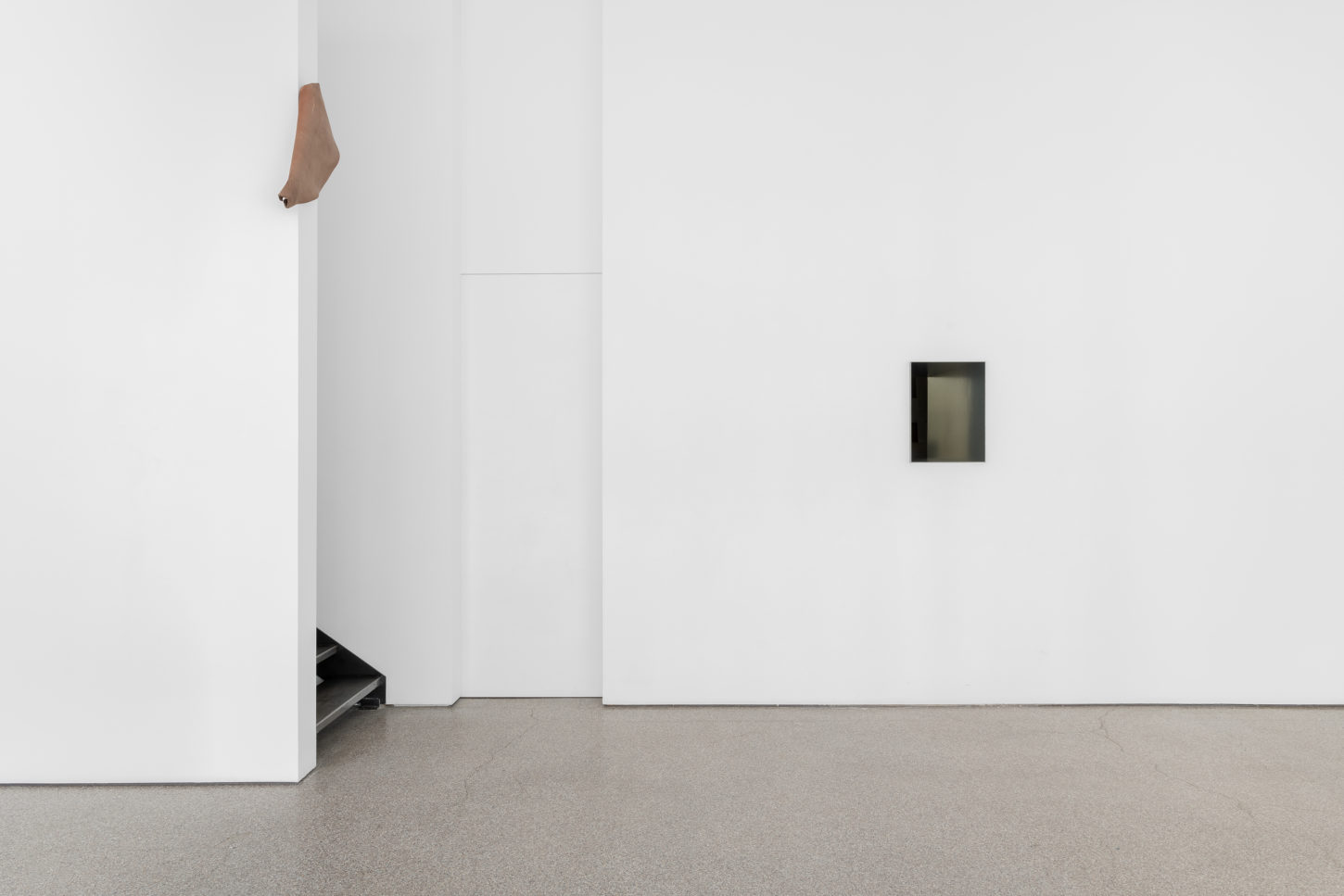 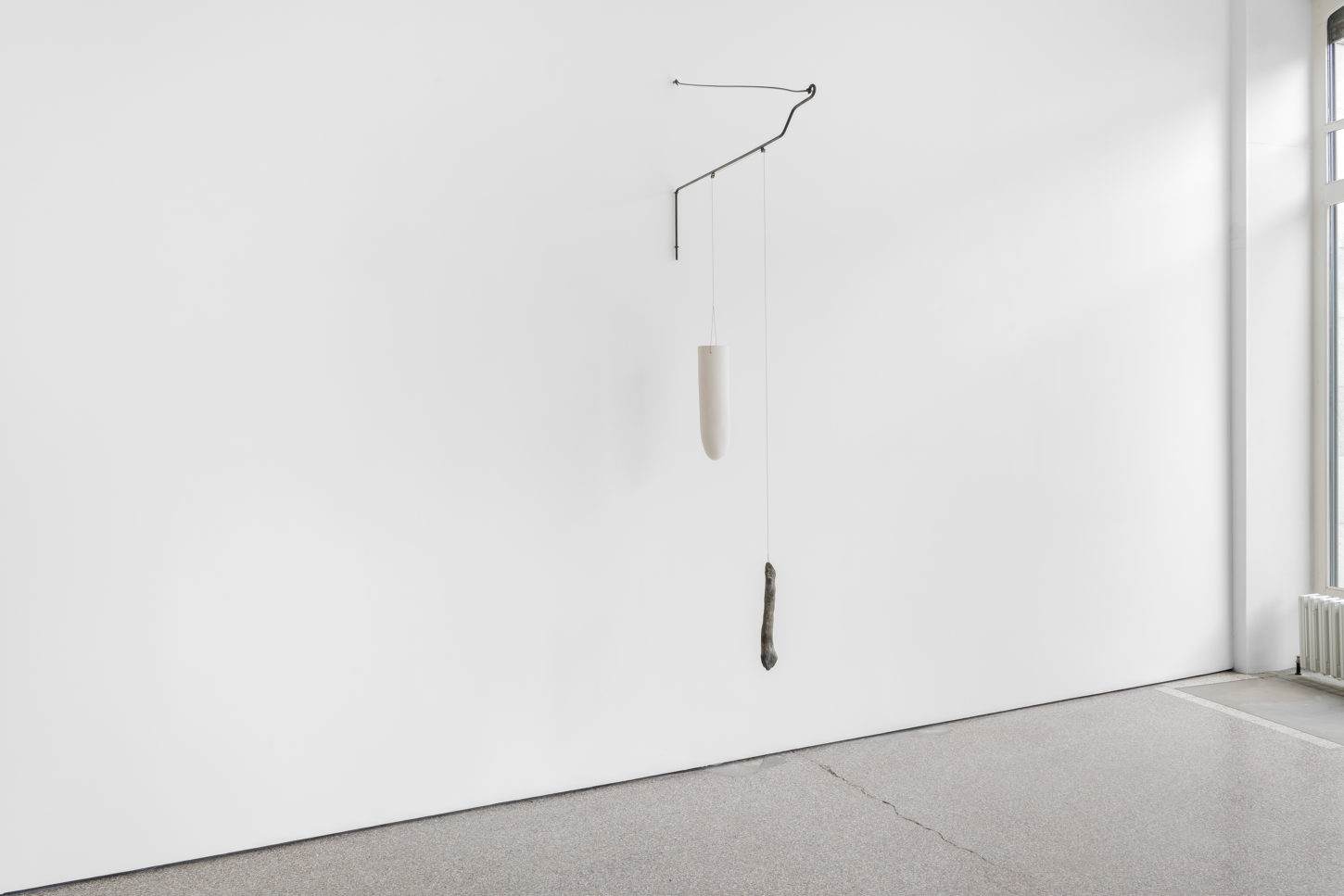 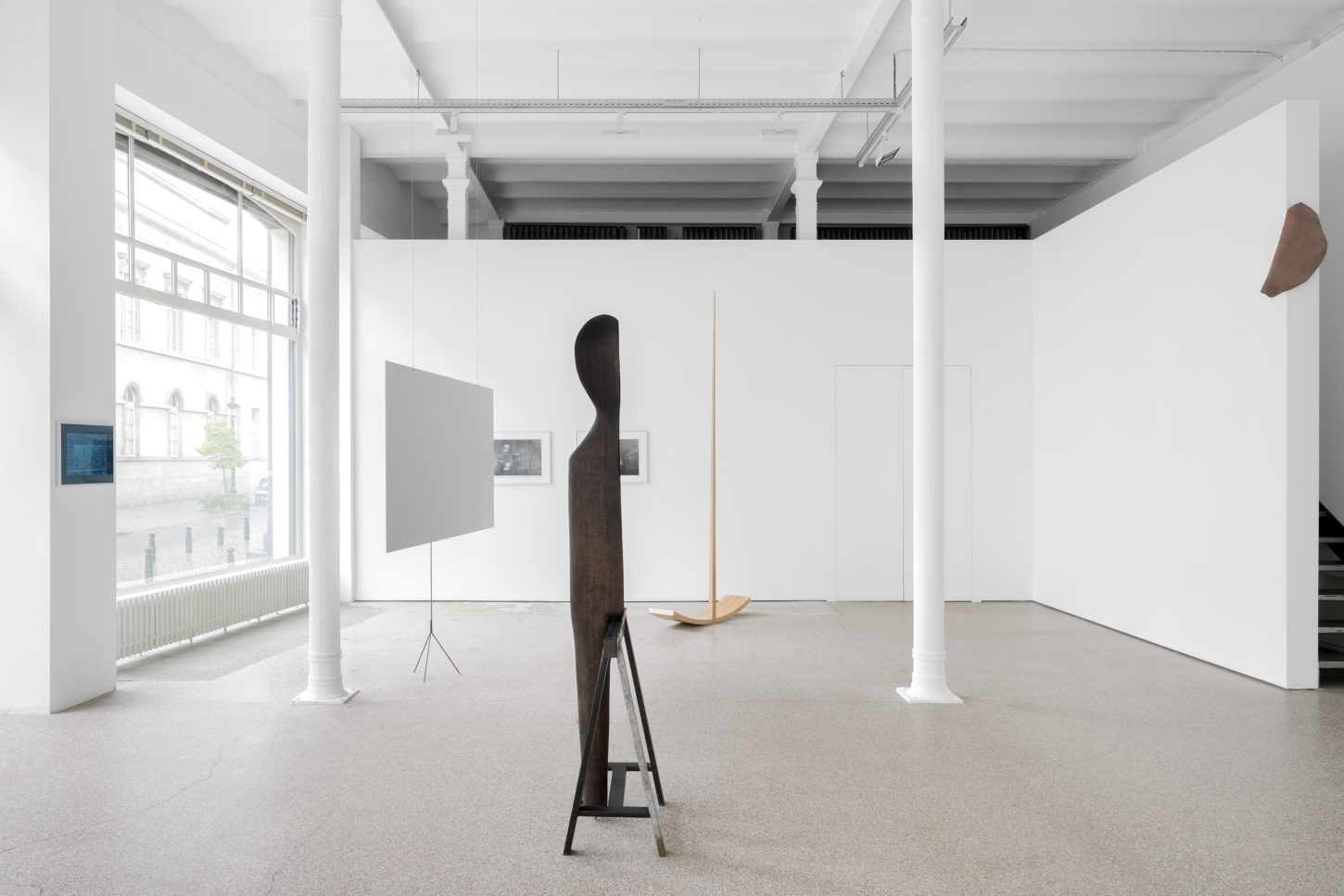 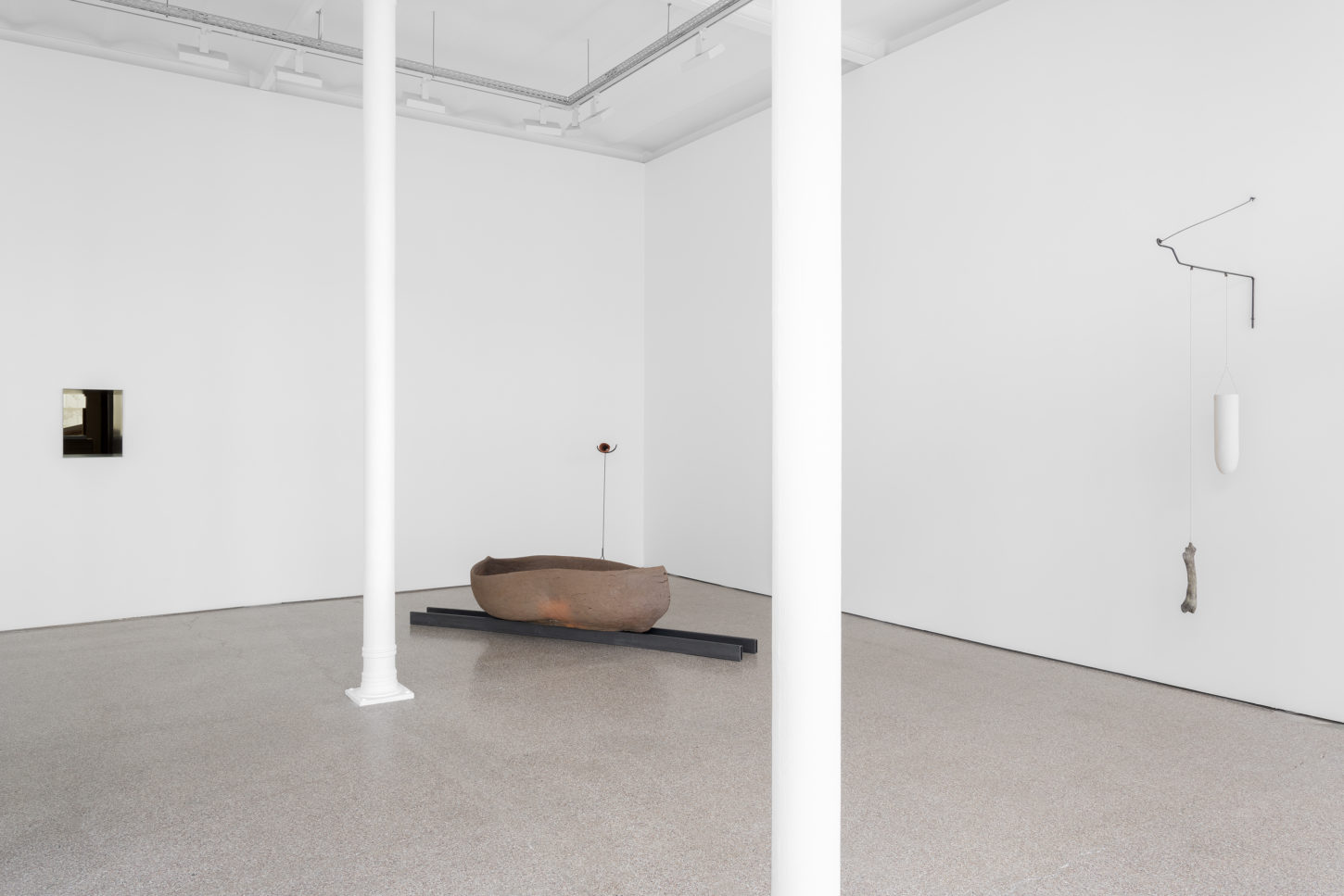 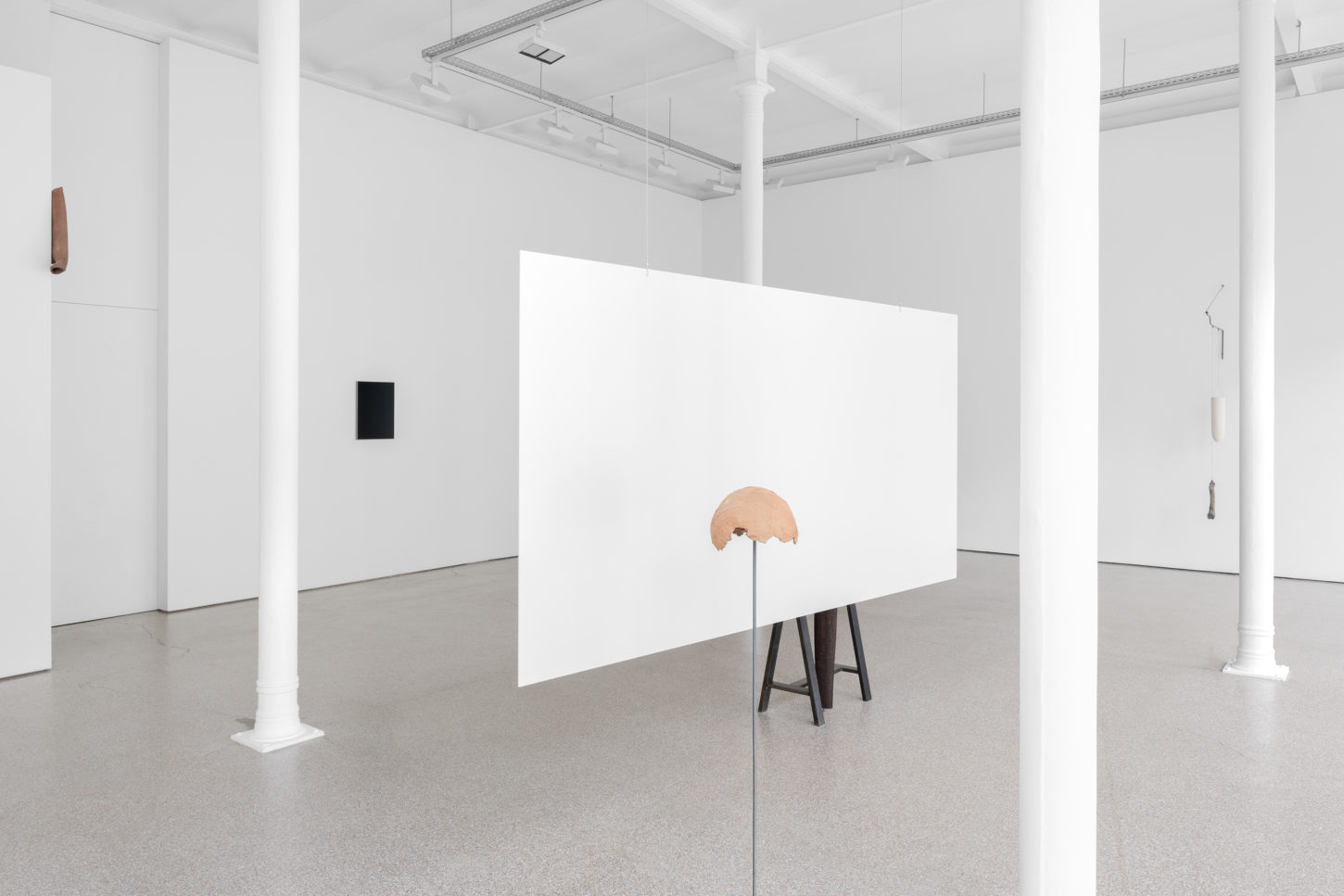 For her second exhibition at Galerie Greta Meert, German artist Katinka Bock (b. 1976 in Frankfurt am Main, lives and works in Paris) conceived an installation informed by Italo Calvino’s novel MR Palomar (1983). She developed Fermata around some of the key themes of this book – chiefly, how does one distil the process through which we perceive and quantify the world around us in order to create and assign meaning?

In the center of the gallery, facing the front window that gives onto the street, A and I (one of eight) combines a one to one cast of a trestle in steel and bronze with a tall body-like wooden paddle resting on the deceivingly provision structure. The human scale of this centrepiece signals a presence while evading any kind of assertive figuration. Purportedly looking at the passerby on the other side of the window, not quite seating nor leaning, this incongruous body refuses to settle for anything but its own awkwardness. Mr Palomar had decided that his main activity would consist in looking at the things of the outside world.

Fermata draws out a landscape, a territory that is also a language in its own right. Bock invites us to approach this installation as a series of concise observations, philosophical and photographic notations that she has shaped into material encounters and arranged as physical occurrences. Her sculptures present themselves in the front of speculations on the very questions that sparked their making in the first place. They offer no definite solutions and no clear narratives but rely on a subtle equilibrium between materiality and placement. Like writing, their sculptural presence is imbued with a sense of mutability that allows them to express sensations simultaneously and in a linear fashion. A large boat-like ceramic placed on two curved metal rails looks as if it is slowly making its way around the corner of the room. The neighbouring piece precariously balances the bronze cast of a bone and a tapered ceramic cone on either side of a pulley system. On many occasions, Katinka Bock  treats fragile ceramics like these ones as vessels that would have the ability to carry themselves through space and through the semantic territory she devised.

She also uses this duality between the assumed stillness of sculpture and the seemingly light-handed approach that she brings to it to highlight the support structures of the milieu that her work occupies. Through the surreptitious placement of small scale works like Palomar and Warm sculpture (olo) she brings attention to the disregarded walls or to the heating system of the gallery. This logic of disclosure is furthered with the intervention Einsicht beget, a rectangular hole cut directly into the gallery’s main wall, offering a funnelled view onto rue adjacent storage room. An invitation to stop and take the time to look past the delineated space of the exhibition. Just like Mr Palomar, Katinka Bock encourages us to scrutinise the things of the outside world as a site of adventures in looking where one feeling doesn’t exclude another, and where our thoughts and reflections can change direction like a wave upon encountering an obstacle.