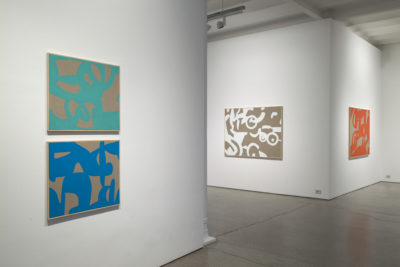 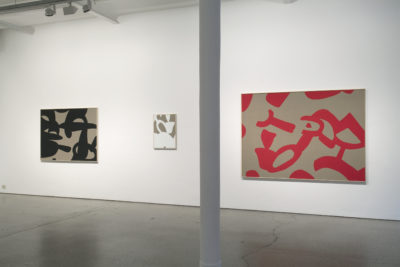 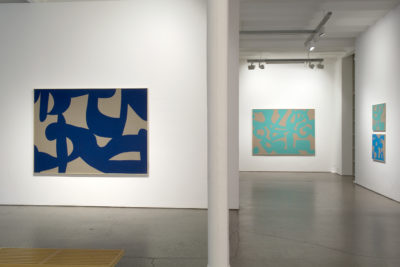 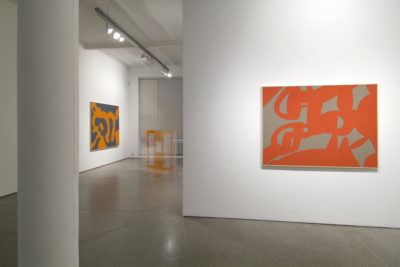 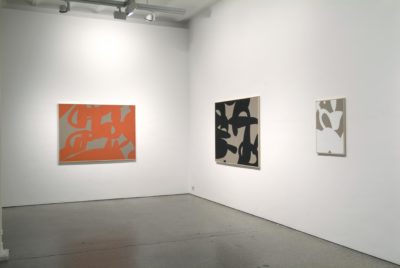 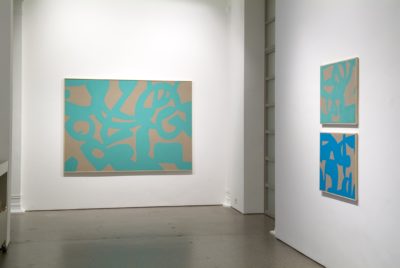 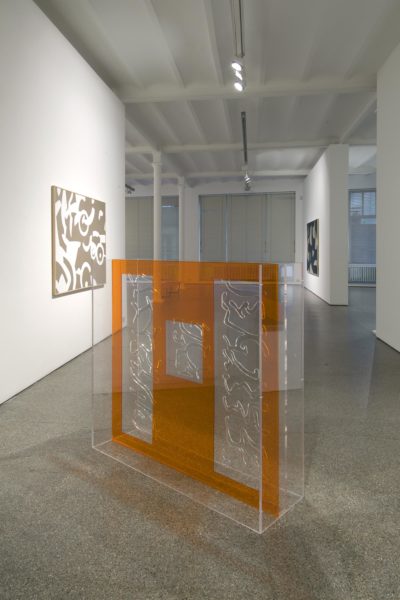 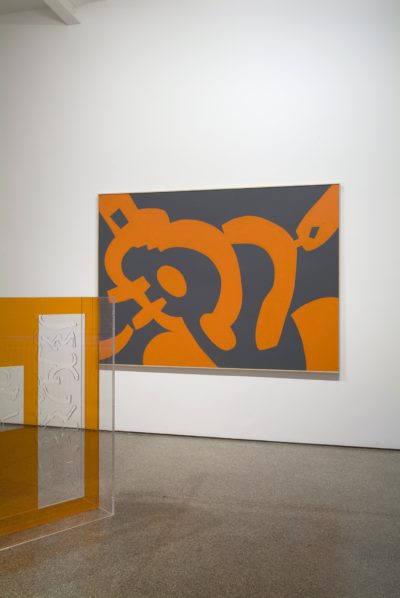 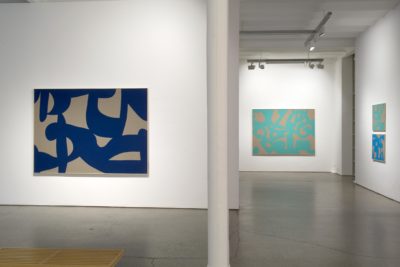 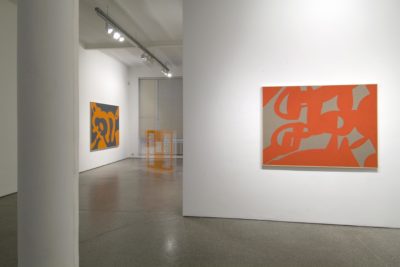 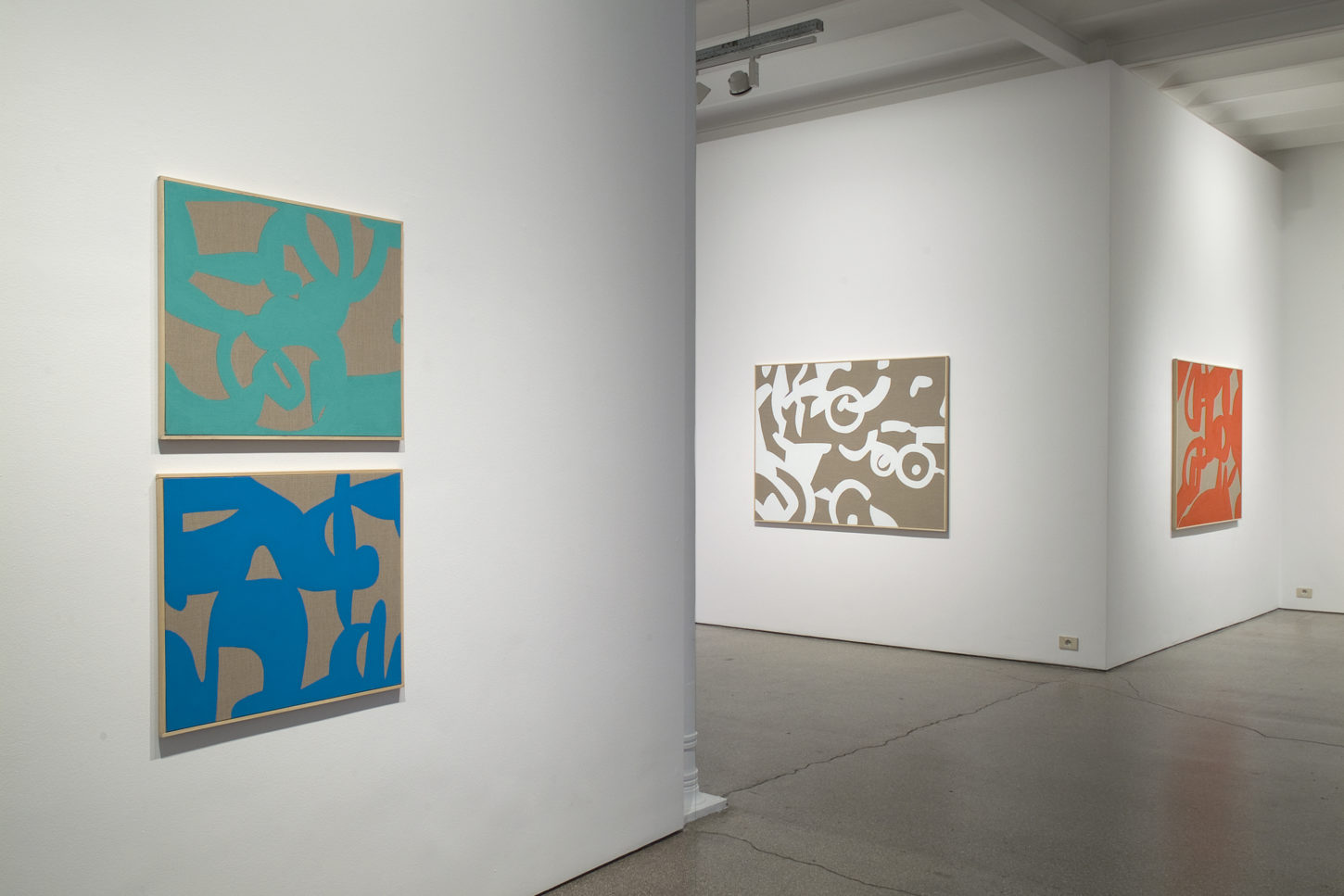 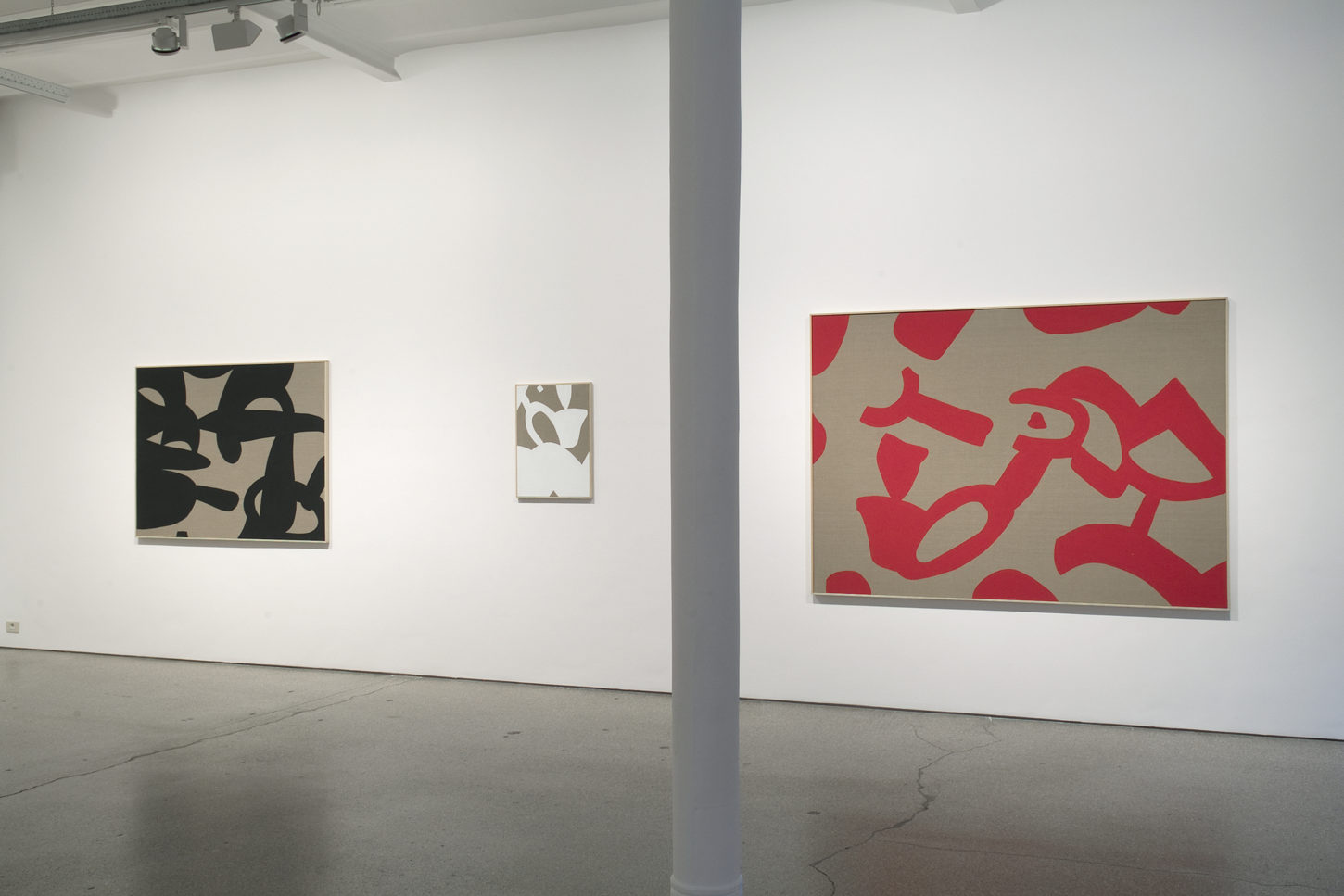 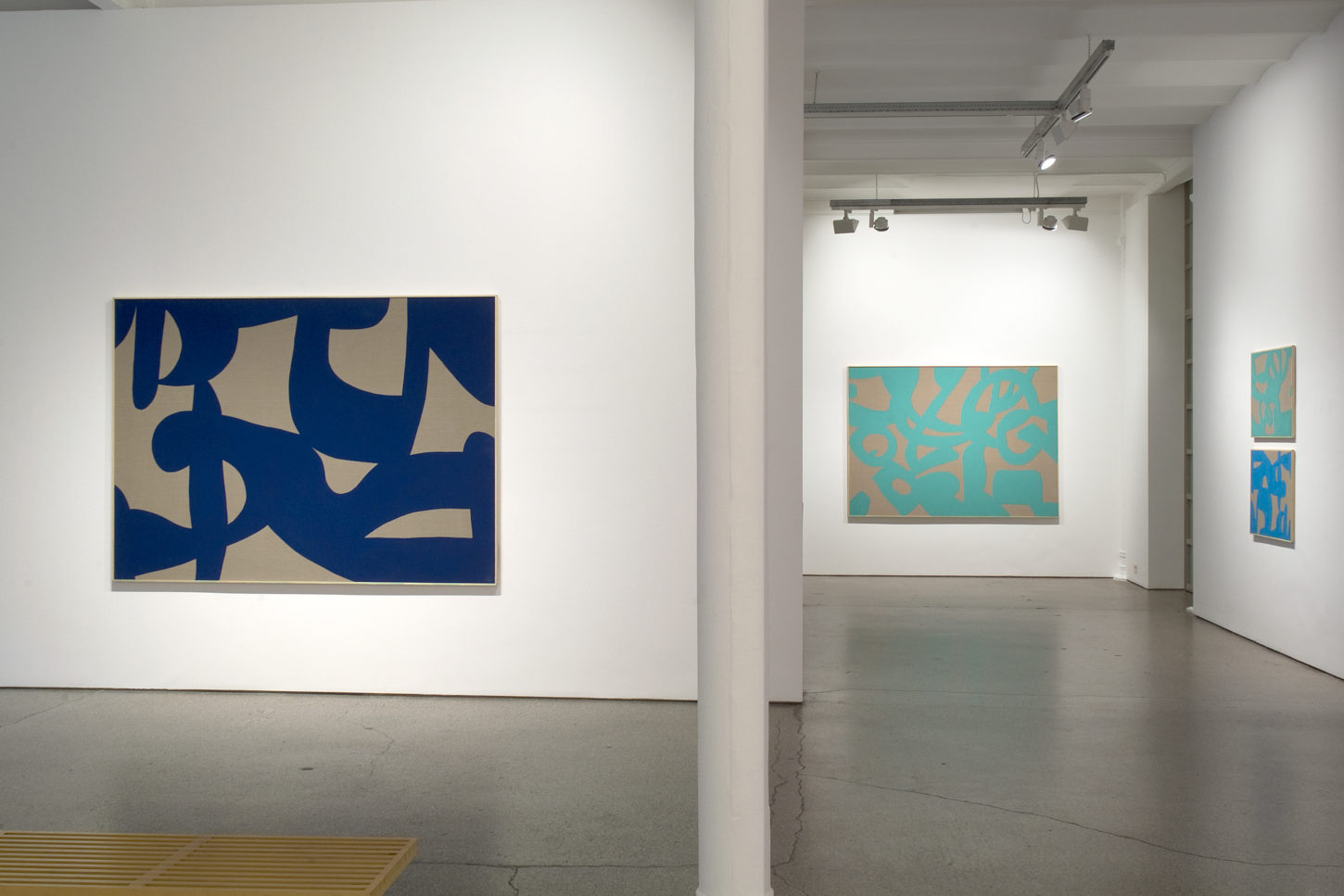 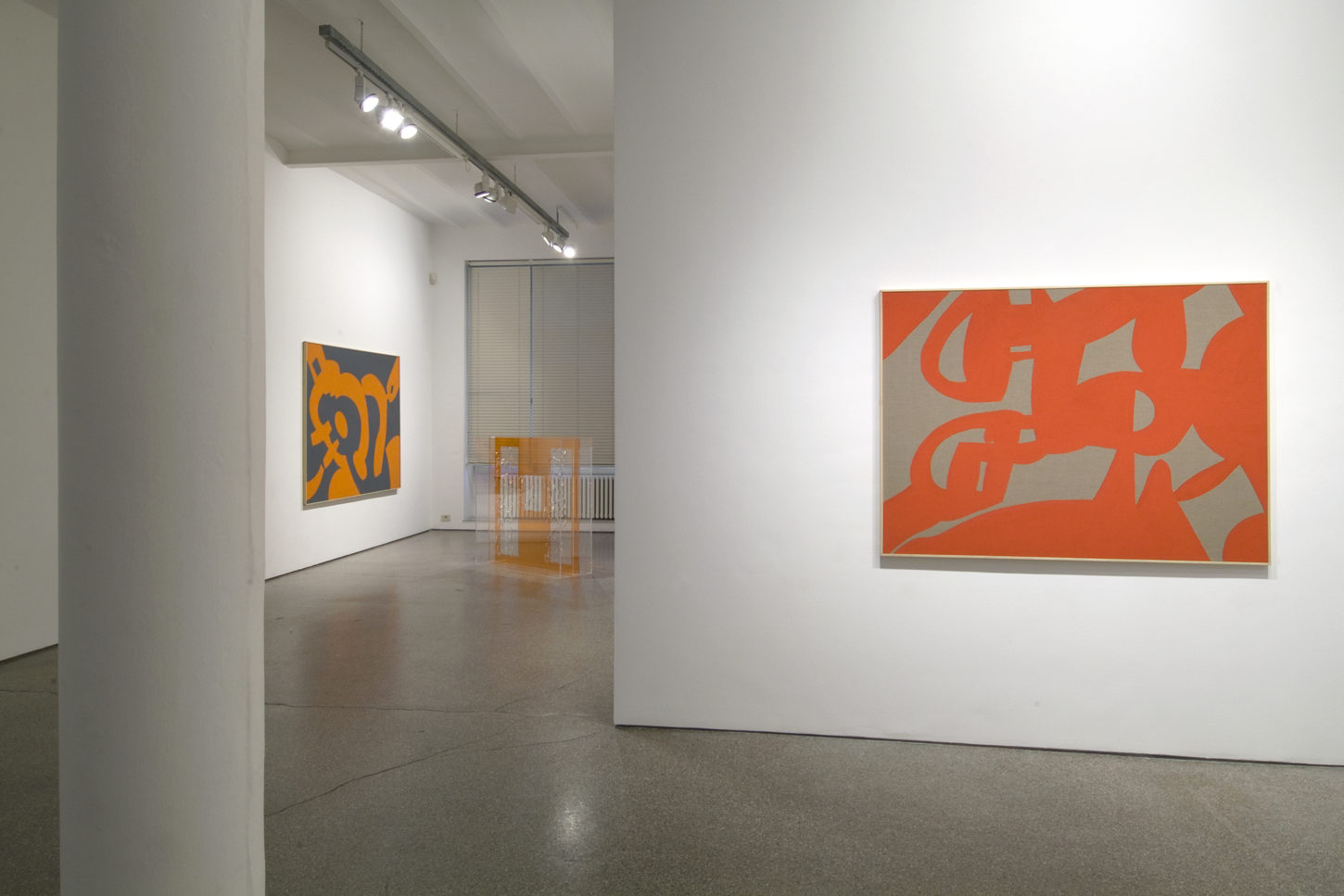 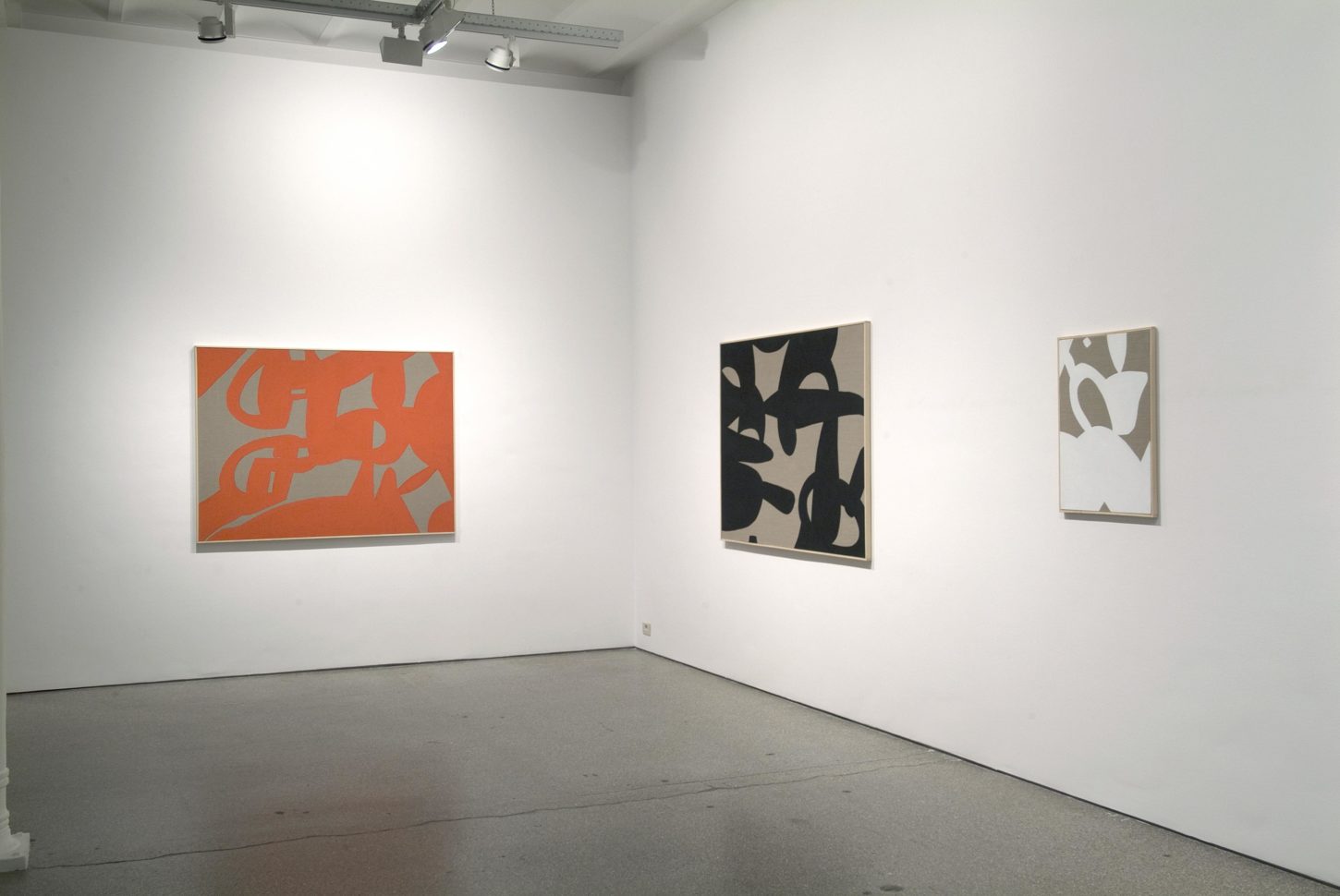 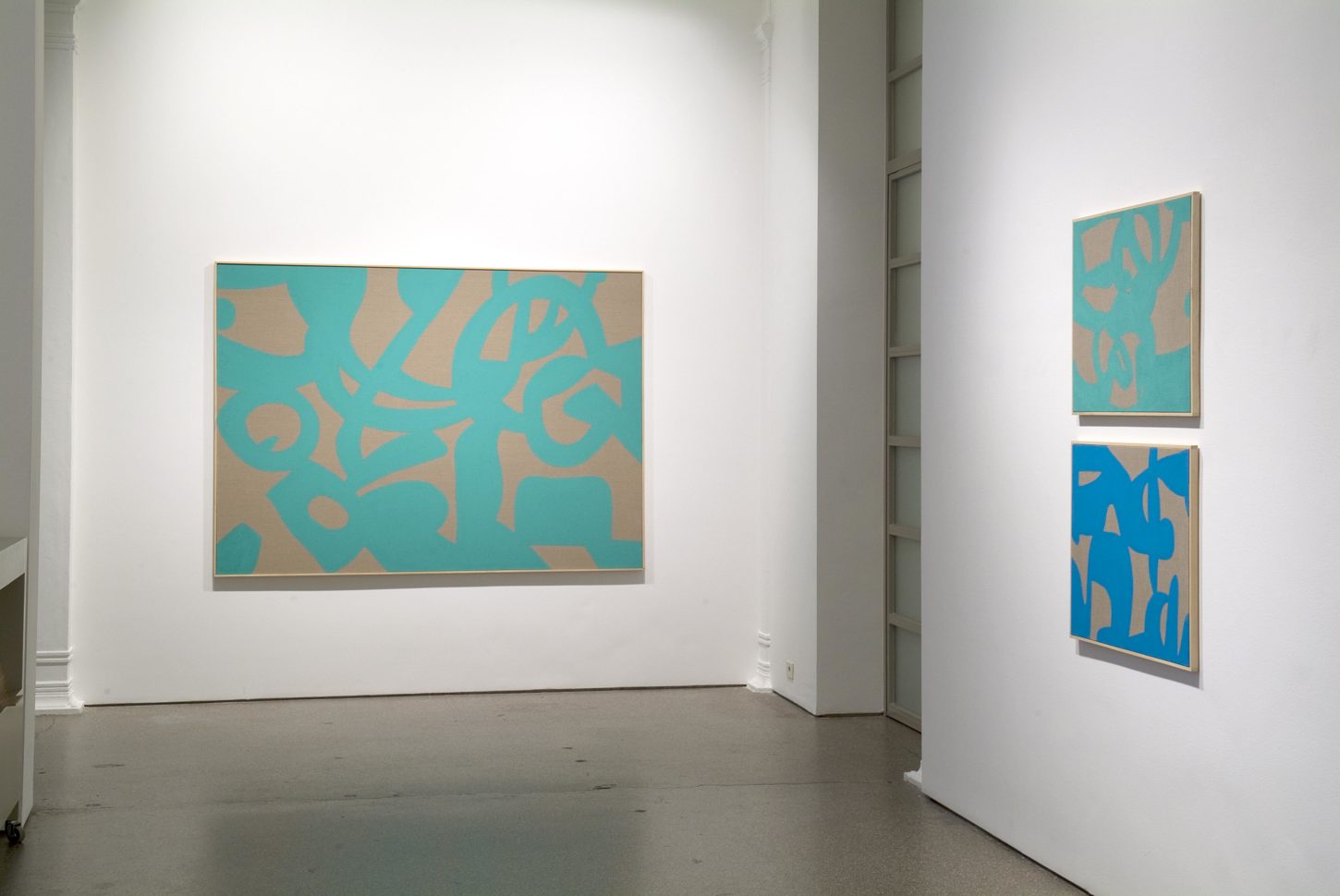 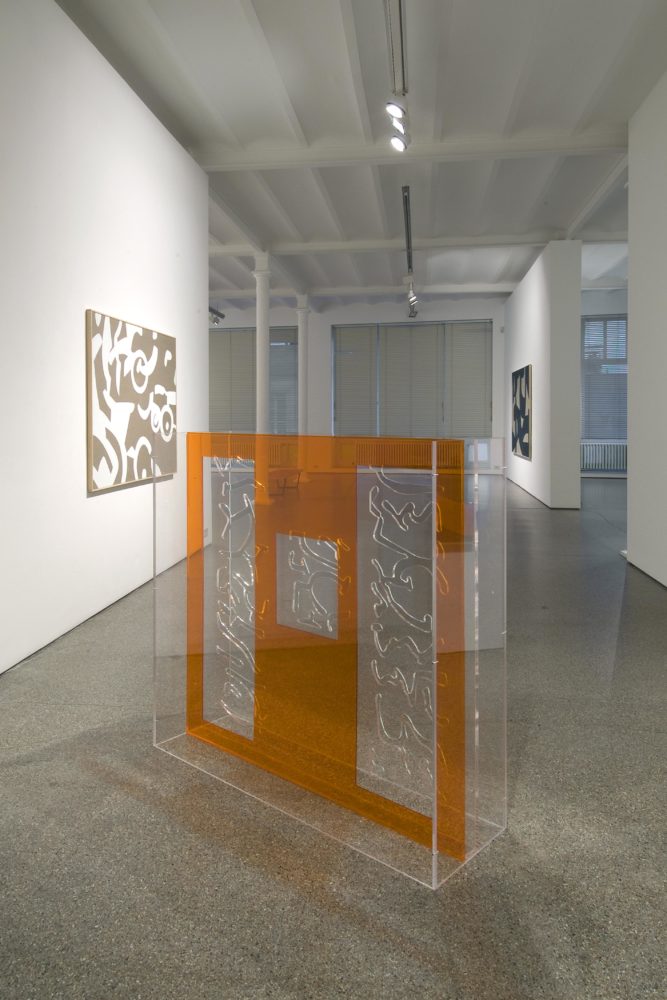 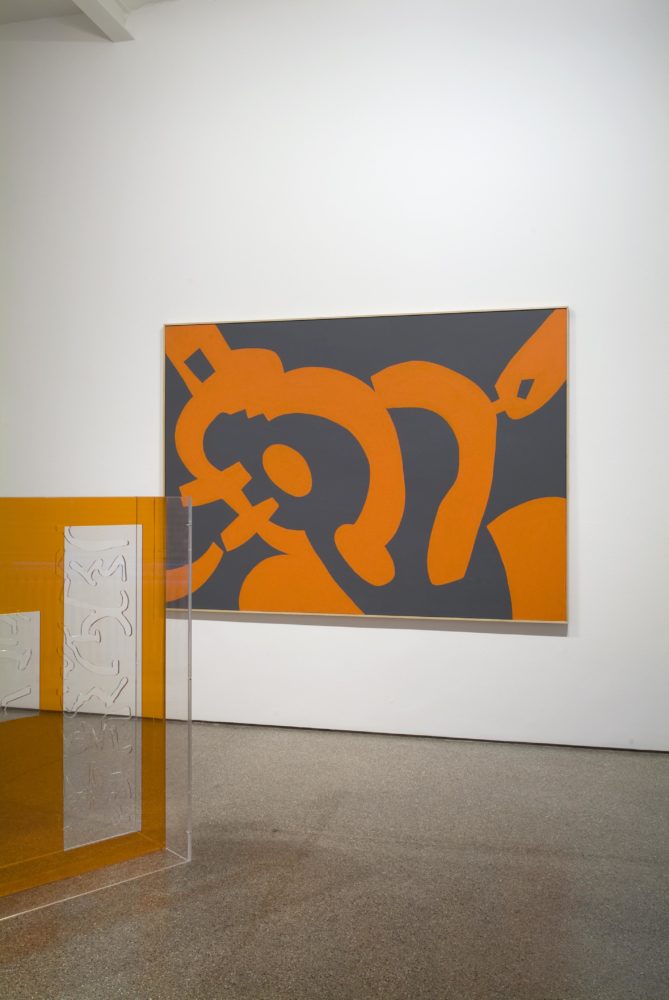 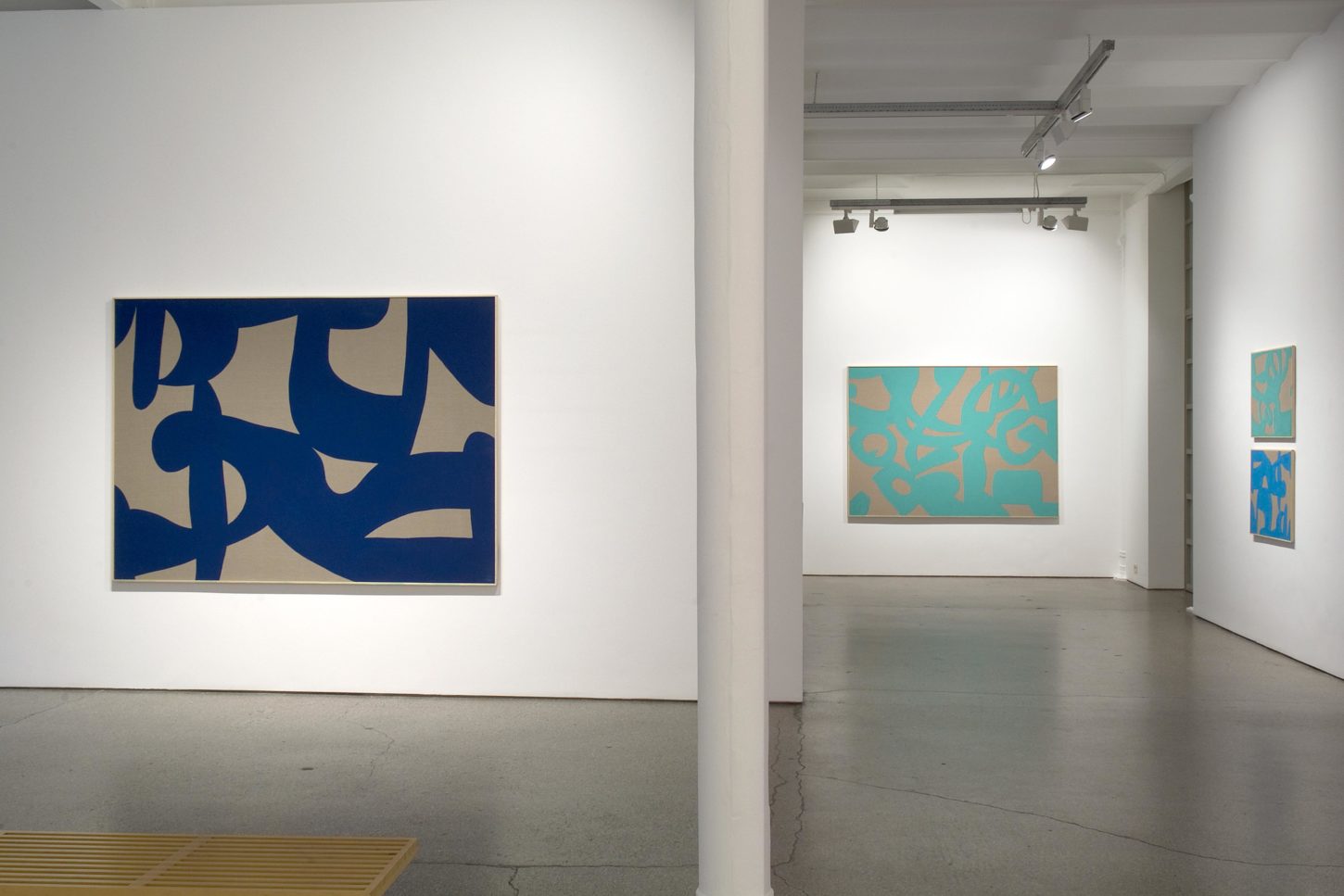 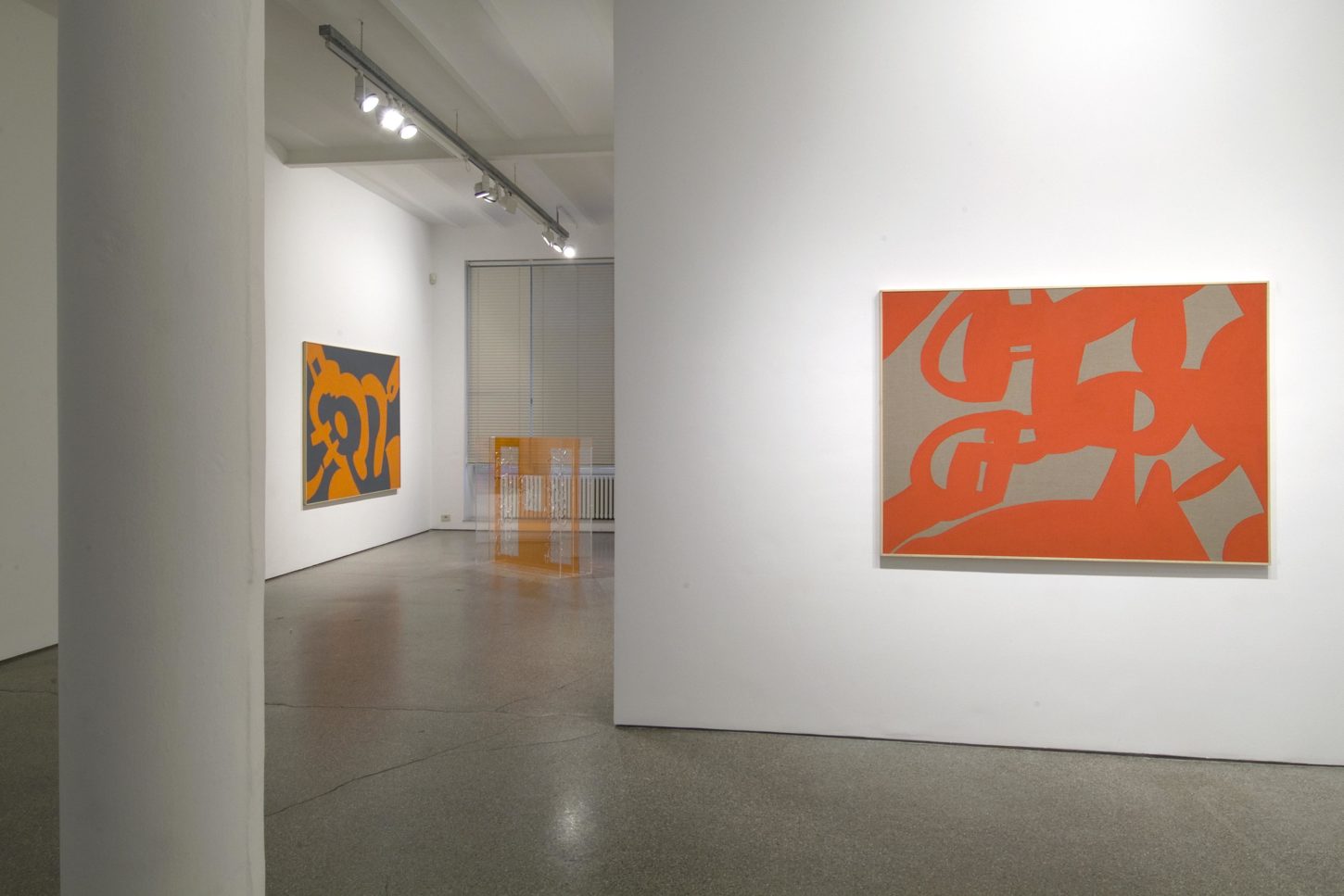 Carla Accardi, who lives and works in Rome, became widely known in the early 1950s for her radical and individual style that departed from both Italian provincialism and post-cubism. In 1947 she co-signed the Forma 1 Manifesto, with artists such as Dorazio, Sanfilippo and Turcato, who were to develop and propagate a more analytical approach to art.
She fills the canvas with a strict lexicon of abstract forms that continuously manage to strike a balance between writing and drawing, as well as between the painting and the sign.
The fresh modernity of her work resides in covering linen canvas, paper or plastic with mechanically applied patterns or antpatterns.

At times the pictorial writing breaks out of the frame format and starts to overrun transparent surfaces or tents. The latter are actualpainted housing units that remind us of Mario Merz’s igloos, but rather without the archaeological and primitive aspects that characterize Arte Povera.

For her present exhibition in Galerie Greta Meert the artist has selected some recent canvases and gouaches on paper. The work on linen canvas presents a very lively ensemble of colours and forms that are reminiscent of her work on plastic (Sicofoil)from the 1960s.

In some pieces Accardi leaves the supporting canvas partly unpainted in reference to writing on paper.
Her work has kept its impressive beauty and power for over 40 years, and through its artistic consistency richly expressed in cheerful and optimistic signs, it has provided a fertile source of inspiration for numerous young Italian artists.

It is commonly accepted among art critics that Carla Accardi, like Marisa Merz, has been one of the most extraordinary female artists of her generation.

This is Carla Accardi’s fifth exhibition in Galerie Greta Meert.