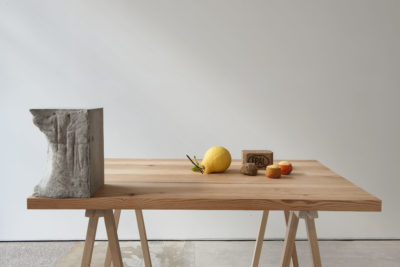 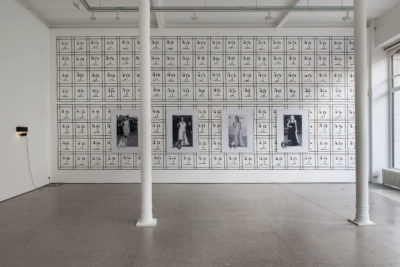 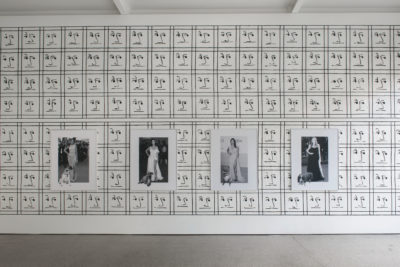 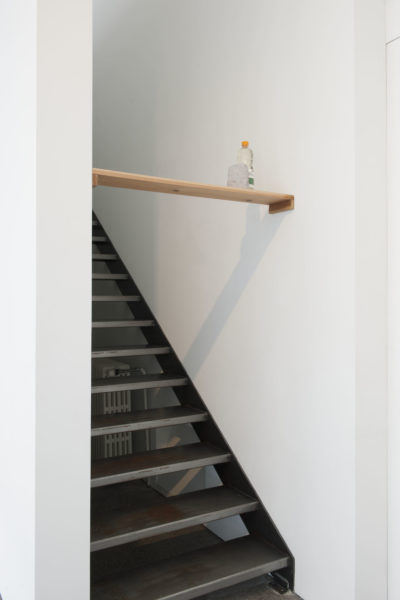 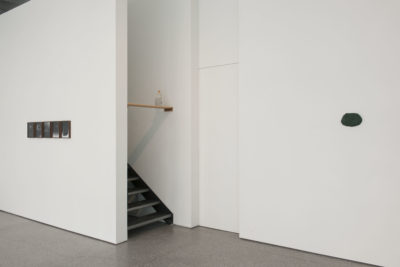 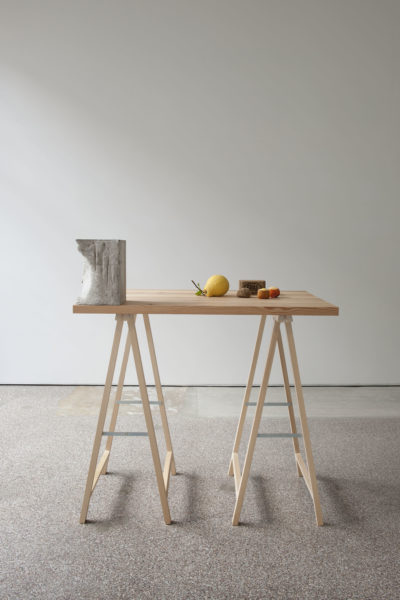 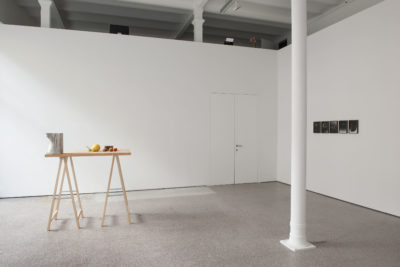 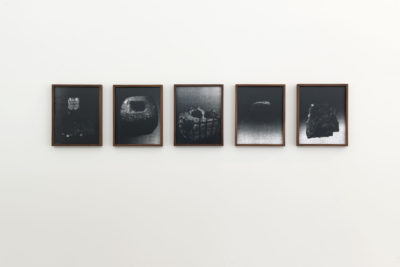 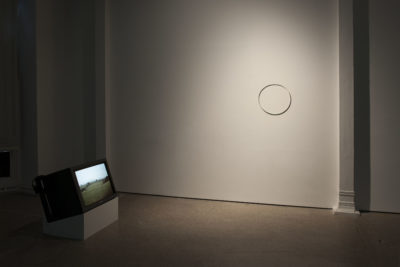 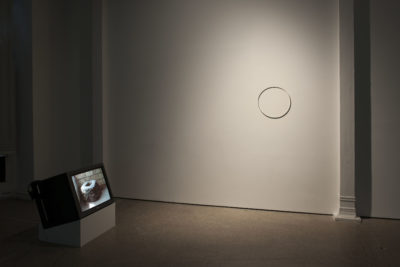 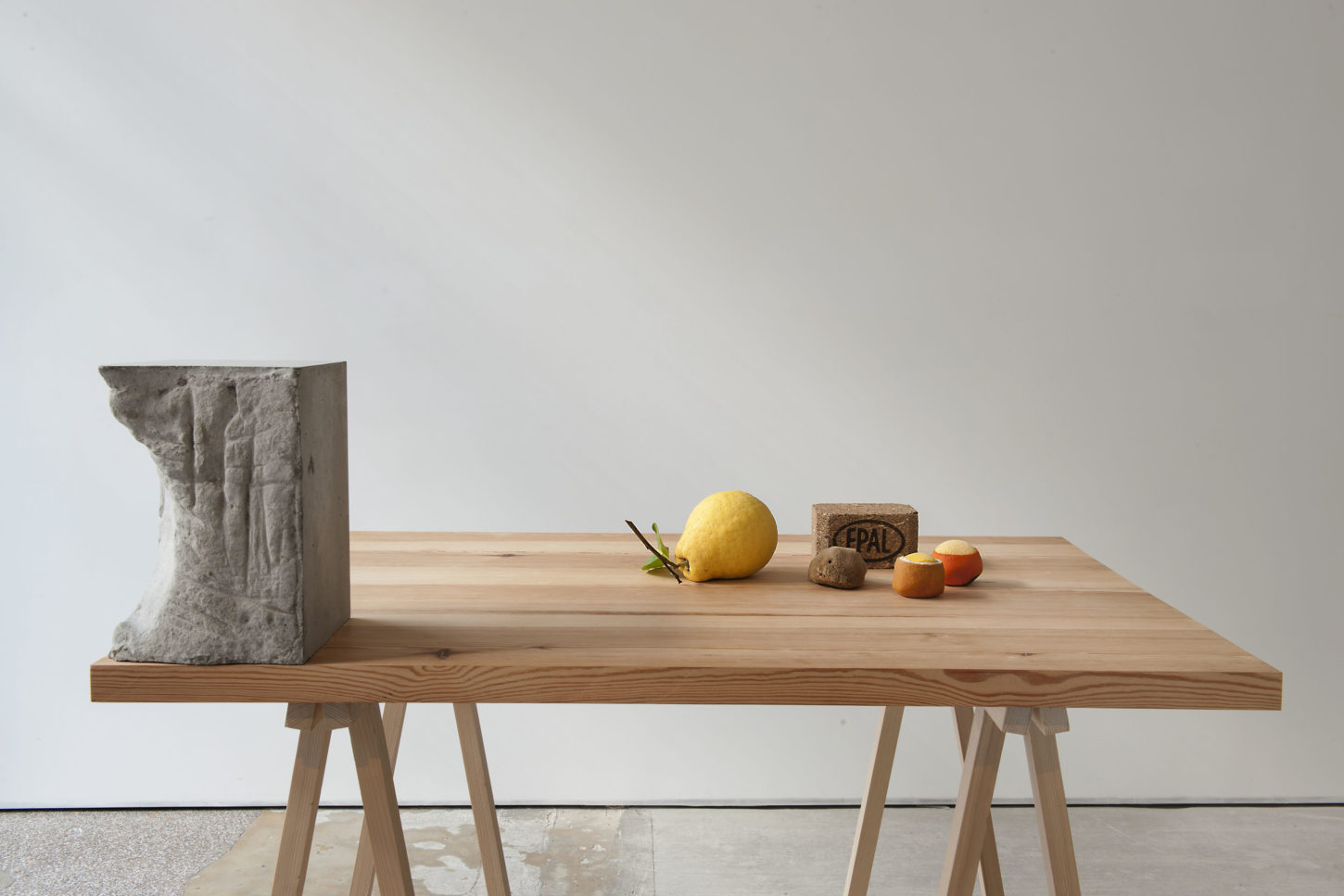 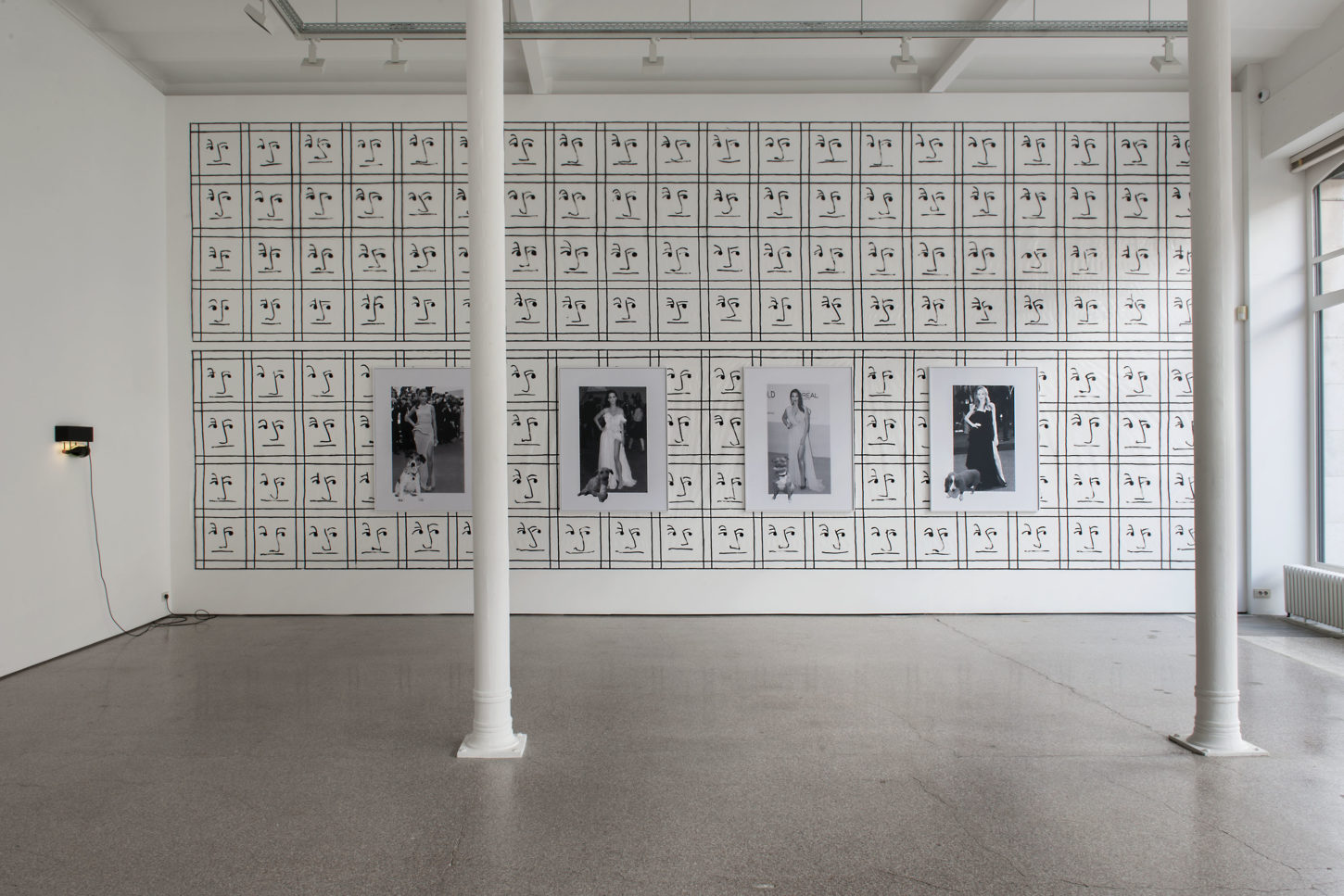 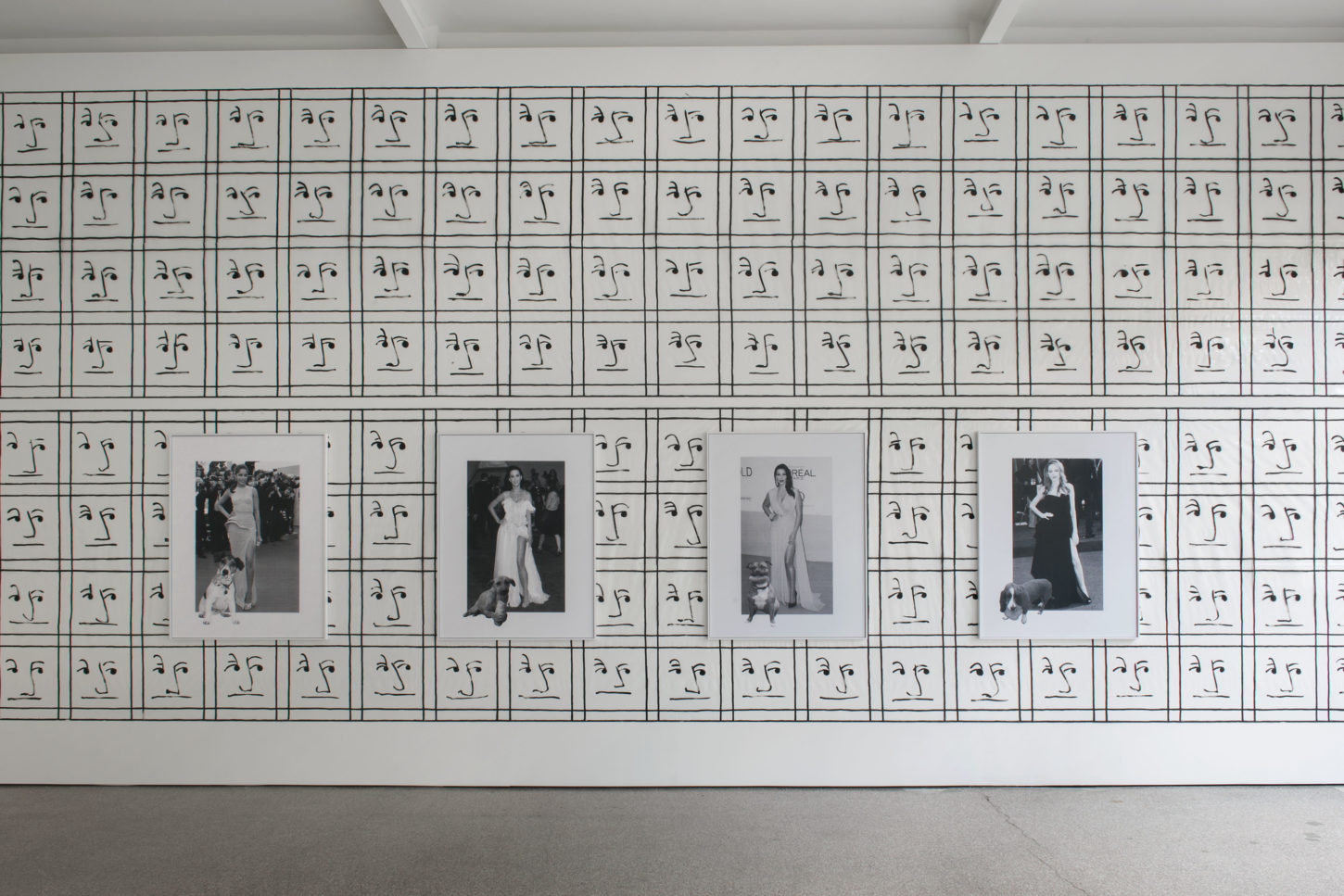 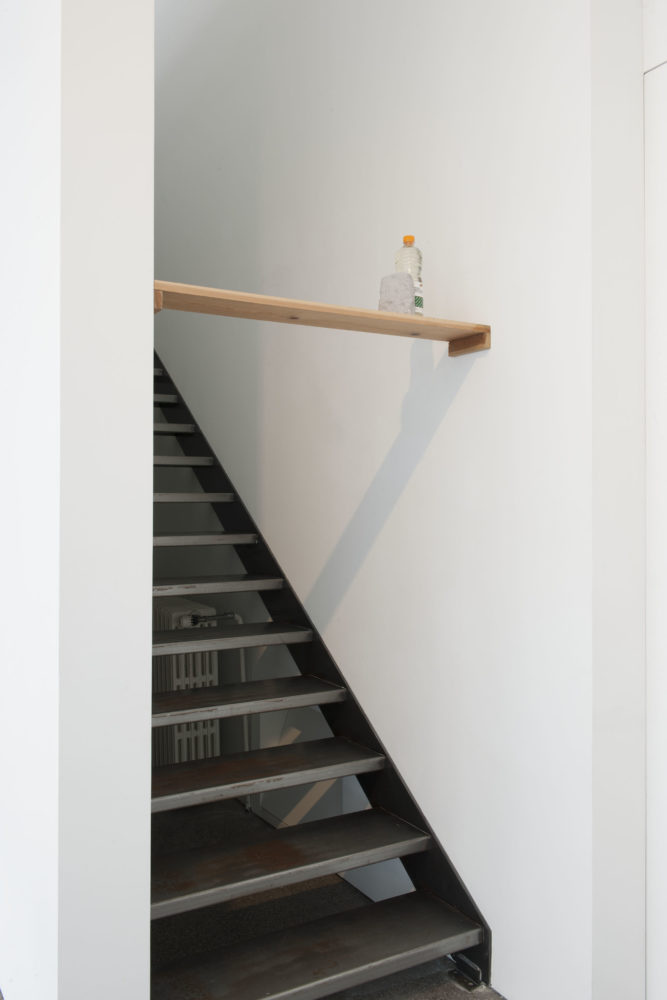 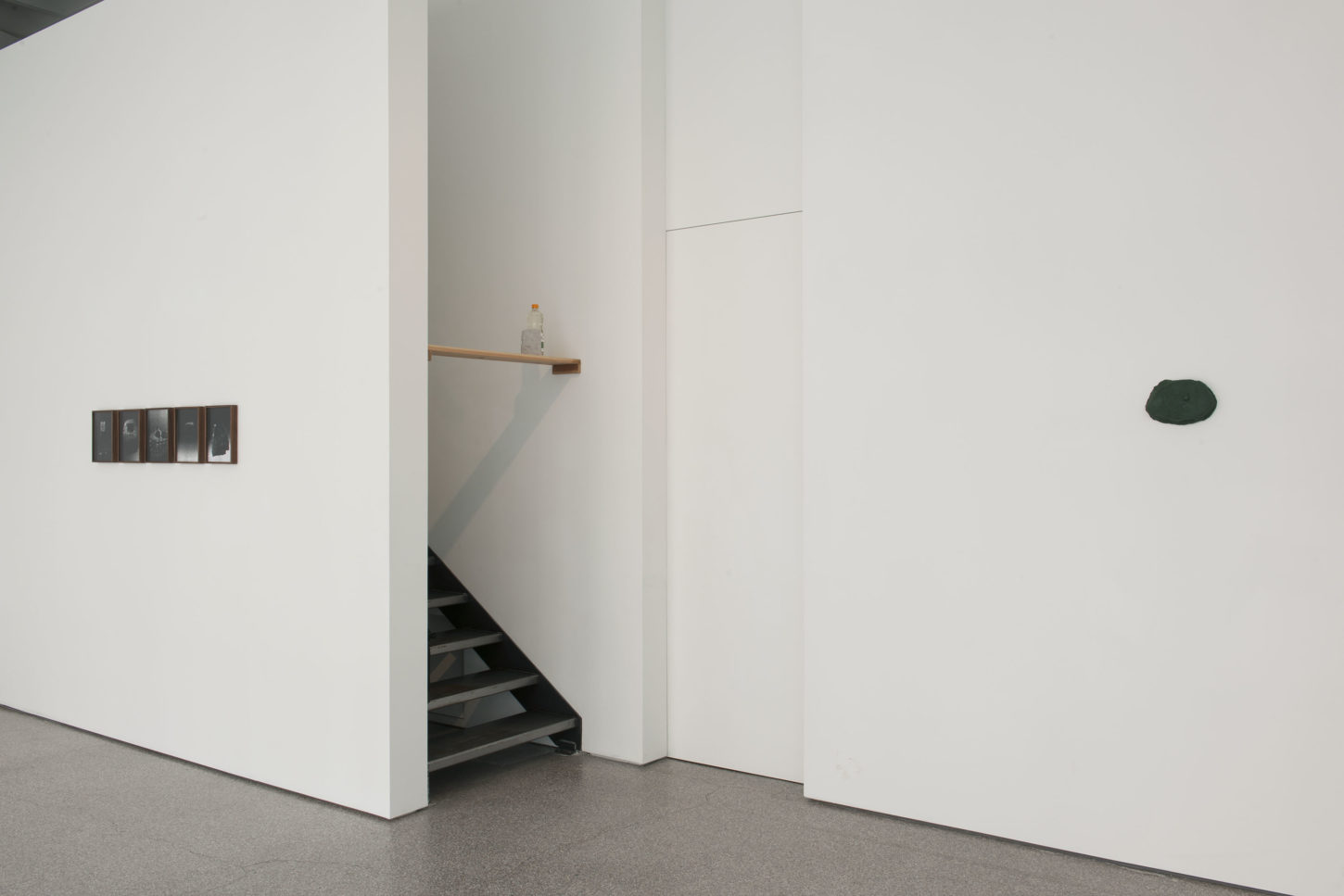 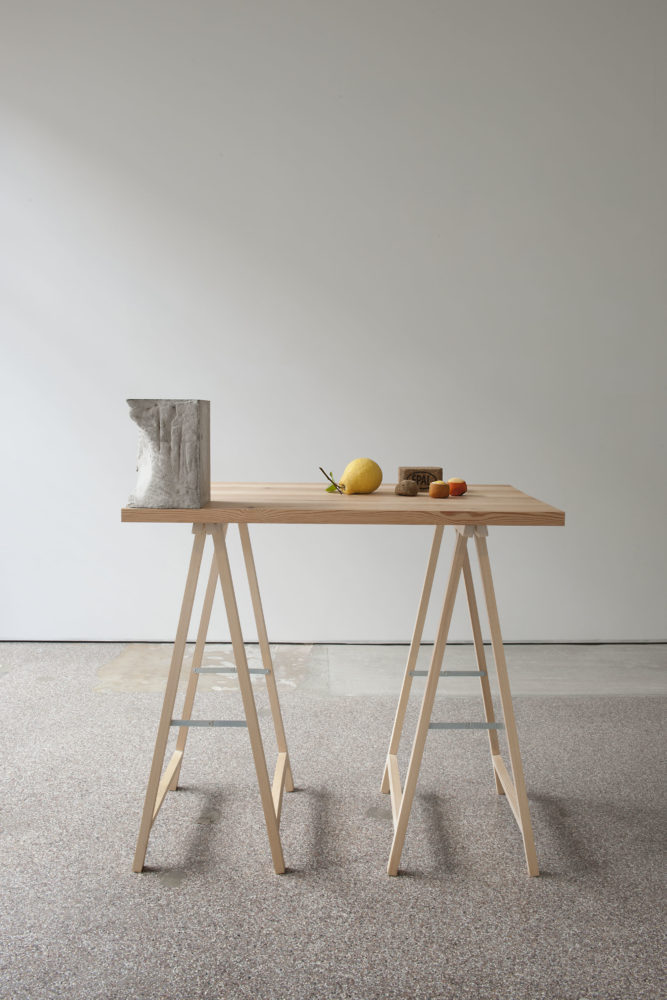 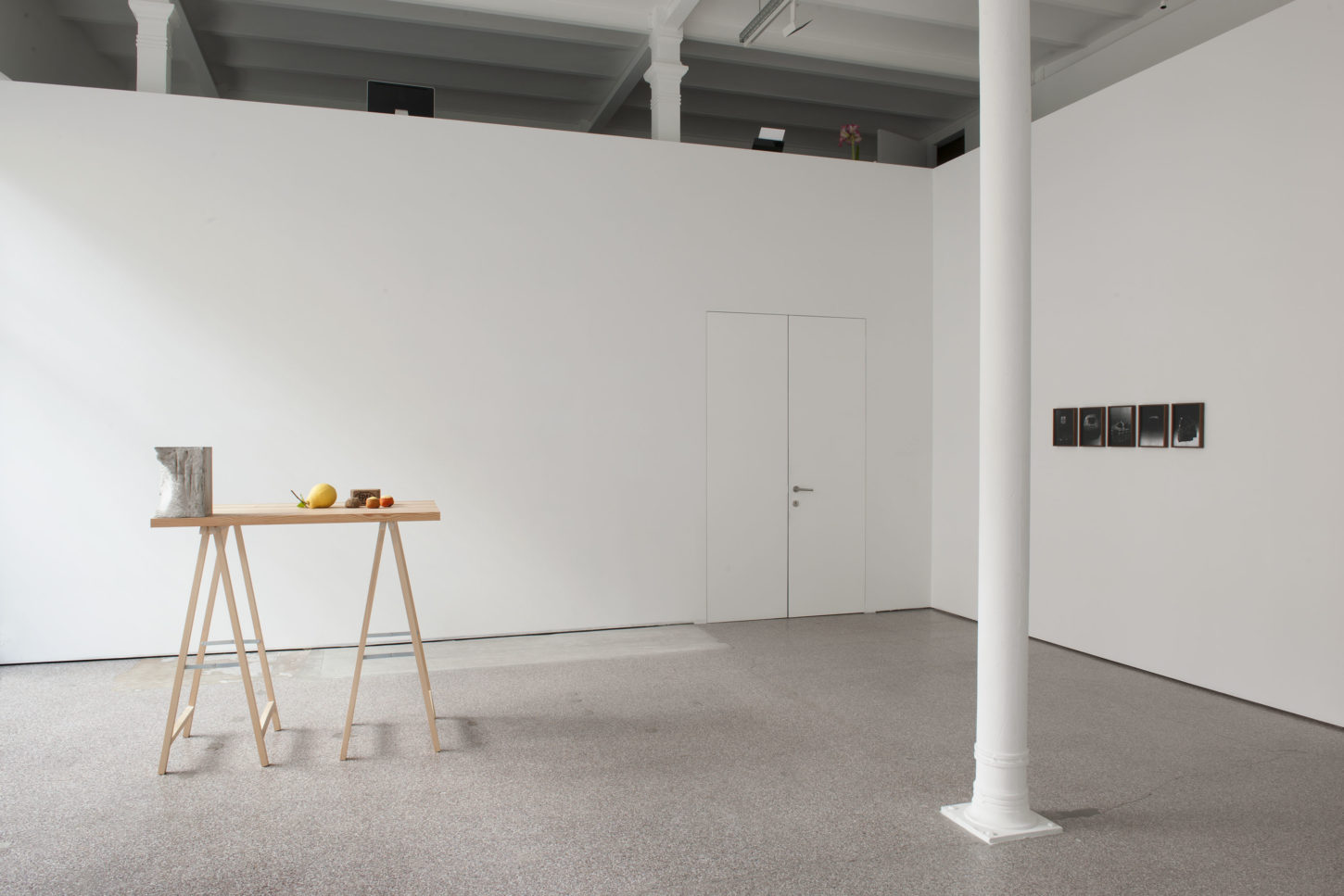 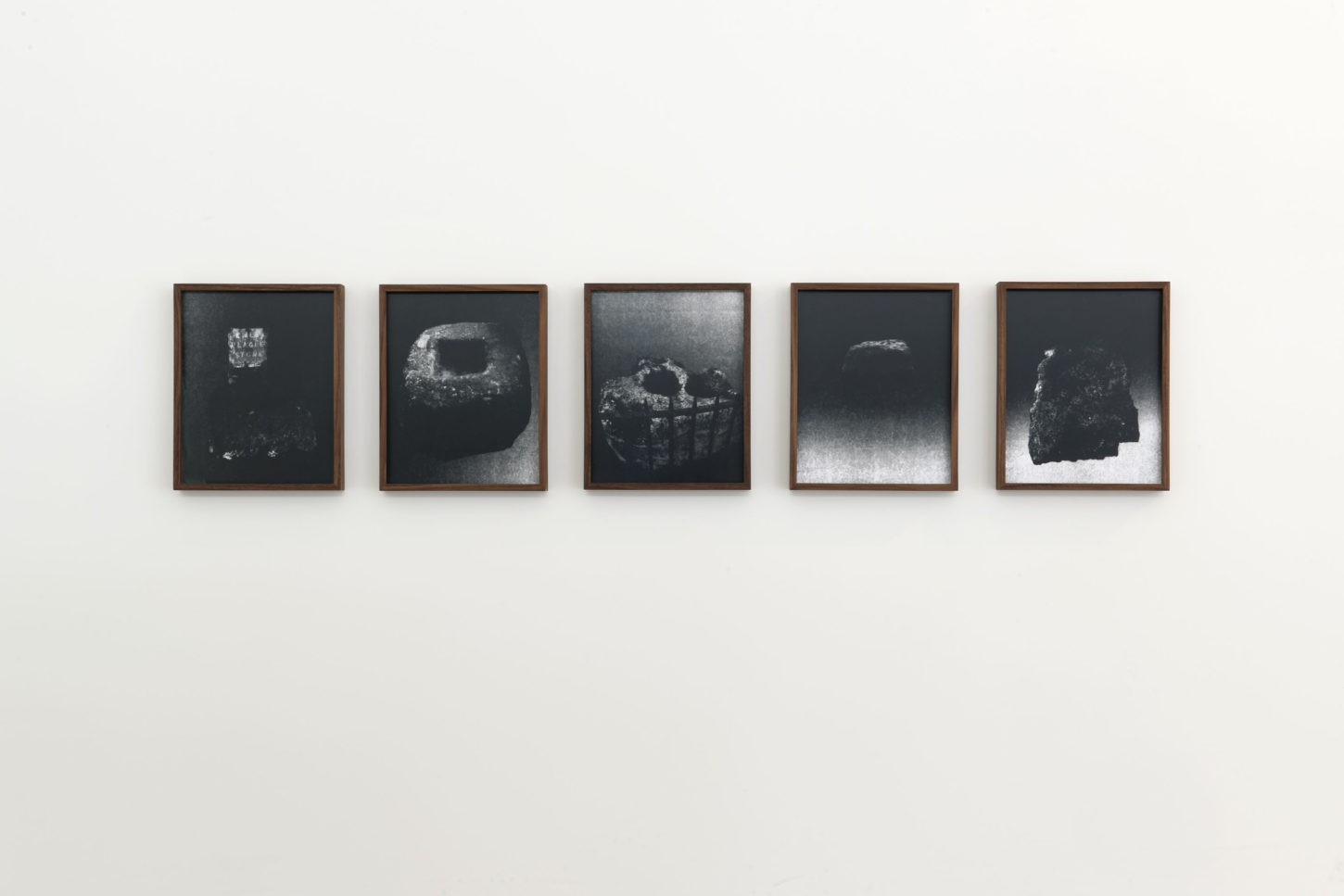 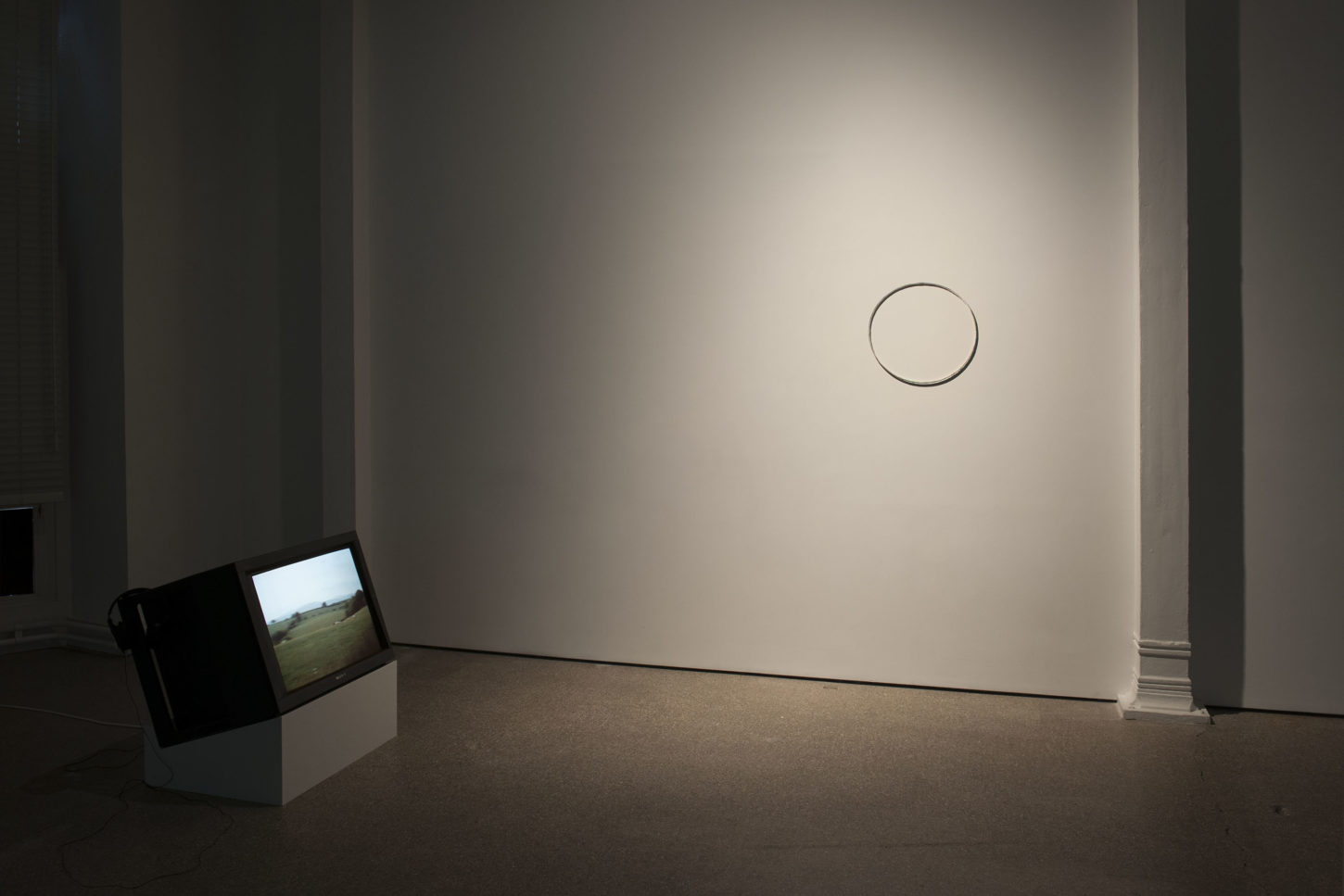 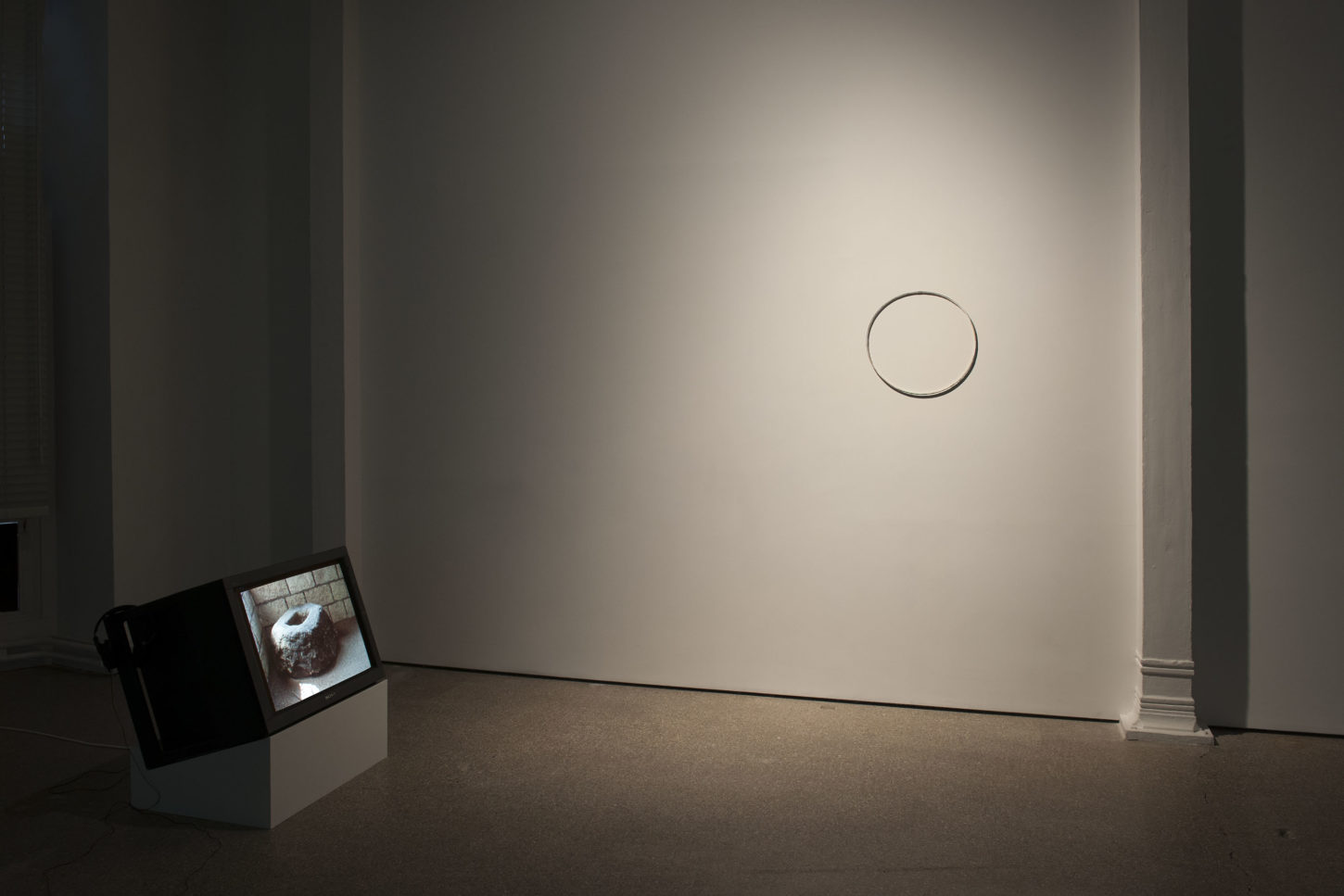 Press Release The invitation card, which shows an image of a plague stone, reads like an introduction to the exhibition. The plague epidemic that ravaged the European continent between 1346 and 1351 resounds in the exhibition space: a church stone in Lochem to which healing powers were ascribed; citrus fruit, sometimes drenched in vinegar or other pomander with disinfecting qualities; Saint Roch, patron saint of the plague. The walls were largely covered with a drawing based on a miniature of Saint Paul’s apocalypse, in which the anonymous plague sufferer is given a “face”. The recuperation of these objects in a contemporary artistic context holds up a mirror to the viewer. When Sophie Nys draws lines to our society, the humour always prevails upon direct social criticism. The collages with celebrities as reincarnations of Saint Roch form an ironical link between our ideals of health and of beauty. The edition, which consists of a holder with a champagne bottle as a way of controlling the maturation process, refers to the connection between the precious drink and vinegar. The composition of the objects on the table refers to a still life. The use of living materials will make the physical transience happen in the course of the exhibition. This ‘détournement’ or turnabout undermines the hierarchical relationship of the art-historical given with regard to the everyday object. In her work the artist has often used a conceptual strategy that creates a tone that demystifies and puts it in perspective. She confronts the symbolic and financial value of the art object with a production that shows a certain economy in material and gesture: documentary-video, serigraphy, casting. The table may be regarded as a synthesis of different lines of thinking. The tabletop has the measurements of a Europalet, a conventional size that standardized European cargo traffic in the 1960s. The height of the table is based on the height of the church stone in Lochem (a cast of which is on the table). This linking-up is a metaphor for a new epidemic that is spreading across the continent through economic activity and financial transactions. ‘Full of Piss and Vinegar’, Nys’ latest video, has its first public screening on the first gallery floor.  The image scans the English landscape and testifies of the forgotten, anti-monumental, existence of the  plague stone and other remnants of the plague. Besides some wandering sheeps, the music score of ‘Requiem’ (1965) by György Ligeti, alludes to a less tangible presence, memorising the many victims. Throughout the video one experiences the research-driven method of Nys’ work. The research is an open structure; the genesis of a work of art is a coming together of intuitive choices and an analytical attitude. A historical document, a narrative source, a found object: the artefact is often a point of departure. Their unchanging, autonomous meaning is challenged by a more formal-material consideration that is sensitive to the tactility of the object. A symbiosis of poetry and concreteness.